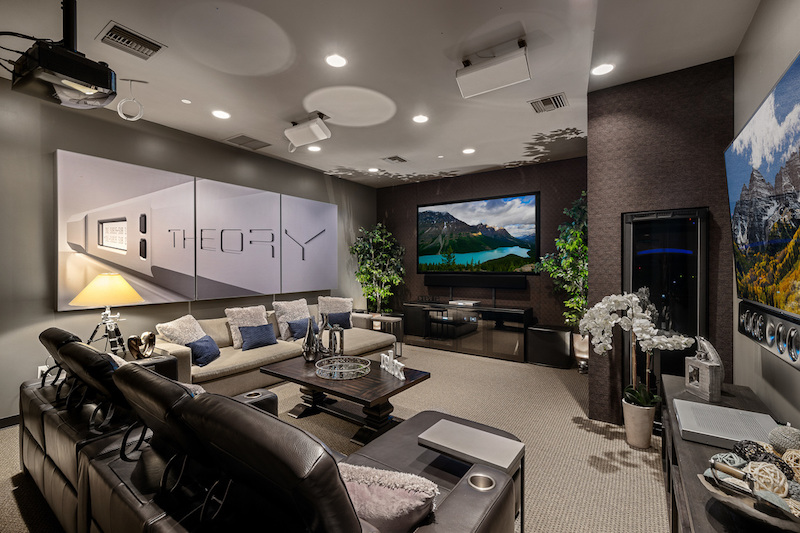 Despite the company’s plans to diversify their audio offerings, soundbars are still front and center of the current line up featured in the Theory Audio Design/Pro Audio Technology Experience Center in Lake Forest, CA.

Taking Care of the Audio

Editor’s Note: This article was written prior to the COVID-19 pandemic

I’m sitting in one of two screening rooms at the Theory Audio Design/Pro Audio Technology Experience Center in Lake Forest, CA, having just heard the single most powerful soundbar demo I’ve ever heard in my life, when owner and president Paul Hales makes a curious proclamation: “I don’t want Theory to be known as a soundbar company.” Curious, because the core of Theory Audio Design’s home cinema sound systems is built around three different soundbar offerings, designed to match 65-, 75-, and 85-inch TVs, with a unique style that relies on custom-extruded aluminum chassis and Apple-esque industrial design.

Whether you’re building a 3.0-channel Theory system or a full-blown 5.2.2-channel Atmos system complete with on-wall and on-ceiling surround and overhead speakers, one of those soundbars is almost certainly front and center. So, to my ears, him saying he doesn’t want to be known as a soundbar company is sort of like Porsche saying it doesn’t want to be known as a car manufacturer. Interestingly, that thought ends up being oddly prophetic.

“Let me clarify,” he said, when I pointed out this seeming contradiction. “I don’t want Theory to be known as just a soundbar company. The business plan for Theory extends far past residential surround sound or audio for video. We’re starting there, because we have a built-in customer base thanks to PRO – residential integrators primarily – who cater to residential installed audio/video. But, because we’ve shown this thing at CEDIA twice, and because soundbars are kind of the anchor now, my concern is that the company would be perceived as a home audio/surround sound/soundbar kind of company, and I want to make sure that’s not the case, because we have much bigger aspirations.

“Not to diminish that market,” he added. “We love that market. But we’re aiming for bigger things.”

To hammer home his point, Hales pulled up a presentation on his laptop, with a forward-looking timeline for the company. According to the illustration, in-wall and in-ceiling speakers will be added to the existing on-wall lineup, starting as early as this year. Ceiling pendants and subwoofer will come a little later. Dante and AES67 audio over IP and AES70 control are slated for 2021, followed by expansions into the commercial indoor/outdoor marketplace shortly thereafter. And, behind these expanded plans, I can’t help but notice that the entire lineup of products under the Theory Audio Design umbrella isn’t much bigger than it is now.

That’s actually half the point, Hales told me. And he pointed to two luxury car brands to make it. Look at Mercedes and Porsche. Both make roadsters, coupes, sedans, and SUVs. The difference is that Mercedes does it with 28 different models, and Porsche does it with six. “What we aspire to for Theory,” he said, “is to cater to indoor/outdoor, residential and commercial, architectural, and surround sound applications with just a handful of models. We are simply offering fewer models that are more competent and more valuable to meet a broad spectrum of needs.”

And along those same lines, a good amp is a good amp, and a good DSP is a good DSP. That’s why the heart of every Theory Audio Design system is essentially the same speaker controller: a small, 1U, fanless chassis with 1,800 watts of power and some truly sophisticated processing. For now, in surround applications that unit still needs to be fed by a surround sound processor, but eventually that need will go away as Theory adds surround sound – even object-based surround sound – decoding. No matter the application, Hales has worked to make setup as simple as possible. 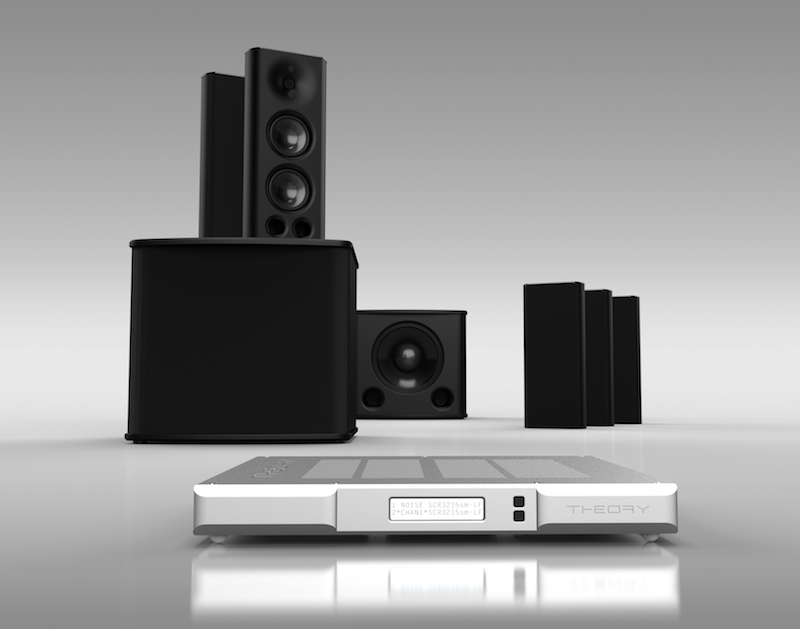 To set up a Theory system – even a complex 5.2.2-channel Atmos system – you don’t have to think about delays, crossovers, or microphones. You don’t have to run complex (and in Hales’ opinion, harmful) room correction. You simply run the full-range, uncalibrated, unfiltered, un-delayed decoded signal from the surround preamp into the loudspeaker controller, then run a program Hales refers to as the “Automator.”

“With the Automator, you answer three questions,” he says. “We need the distance to the chair, to set levels and delays; we need the distance to the nearest wall, to compensate for low-frequency gain of that wall; and we need the distance to the nearest corner, mainly for the subs, because the gain created by the corner is calculated into the subwoofer level setting. Our assumption is that subs are placed on the floor against the wall. And we know based on the efficiency of all the speakers how to set the level relative to the main speakers. And then if you said, ‘Oh, it isn’t against the wall, it’s over there by the couch, twelve feet away from the wall,’ then we’ll compensate for that.”

And that’s it, really. The speaker controller does the rest of the work for you. In fact, both of the Theory systems that I demo’d that day were dialed in completely using the Automator and its calculations based on those three simple answers. No room correction. No EQ. No manual fiddling with levels or delays or crossovers or bass management.

I’ll admit that watching Hales dial in a system, as an audio guy, made me start to feel a bit like a McDonald’s cashier being replaced by a touchscreen. Where does the audio expertise that I’ve spent the past 20 years building up slowly but surely factor in here? If this is the way the home audio industry is headed, am I becoming obsolete? 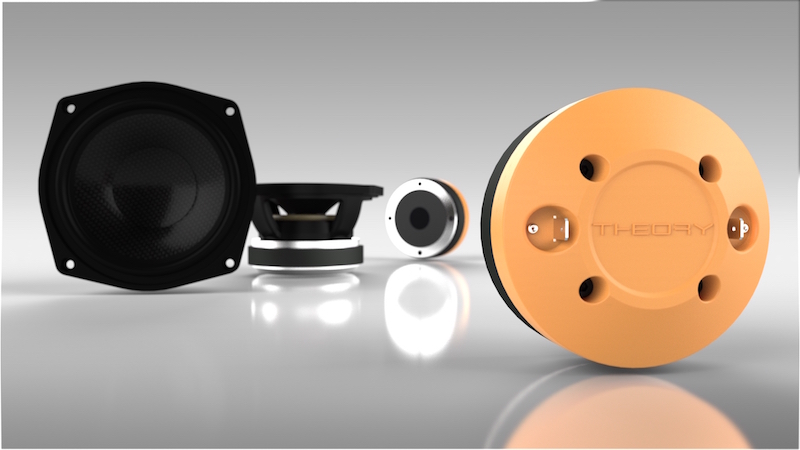 You can build a full-blown 5.2.2-channel Dolby Atmos system with Theory speakers and program called Automator.

“Look, you probably know more about surround processors than 99 percent of the population,” Hales said to me. “You can probably save yourself inside of a surround processor, but think about the average enthusiast or integrator, and how many opportunities surround processors give them to inadvertently screw up the sound. These things are needlessly complex. The manufacturers got into feature wars, and so they loaded them with all sorts of add-ons that are in most cases just ways to harm the sound: dynamic range compression, double bass, dynamic volume compression, night modes, DSP cathedral modes, and all of this stuff.

“I get it,” he continued. “I used to look at every installation as an audio problem. When we started PRO in 2004, I was looking at the world through audio goggles. Everything I looked at was an audio problem. But then I did my own house and realized these systems are extremely complicated. You have video distribution, audio distribution, switching, control, security, cameras, phones, networking, and I realized that these poor integrators – hats off to these guys, because their jobs are so complex. It is amazing to me that the ones out there that are good at it are able to maintain it, because there’s so much complexity, particularly when you start to talk about sophisticated control systems.”

Hales concluded by saying that he realized that expecting every integrator (let alone consumer) to be an audio expert is not only is it unrealistic, but also not even smart. “We don’t want them to be audio experts; let us be the audio experts. We want them to be integration experts. We want them to be sales experts, so they can get these systems installed and working right for their clients so that they can go sell and install the next one. Turn everything off in your processor. Let us take care of the audio. Here’s your Theory system. Answer these questions and you’re going to get good sound.”