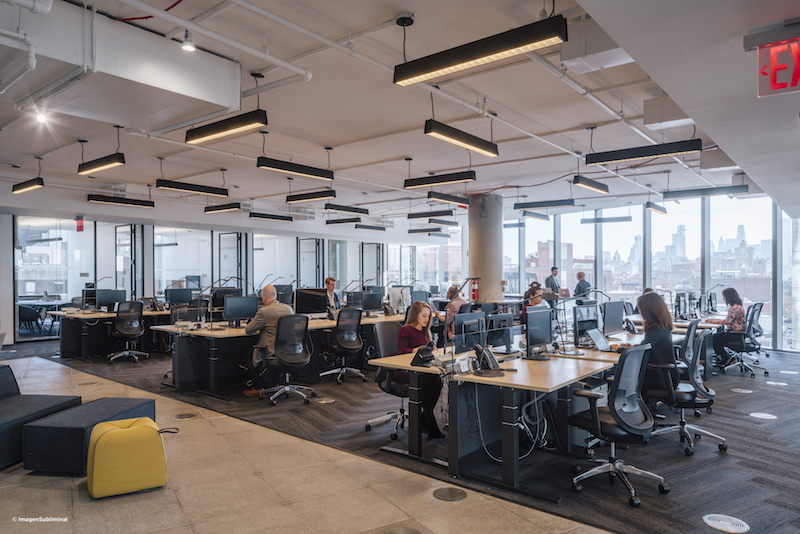 Researchers from the Lighting Research Center (LRC) at Rensselaer Polytechnic Institute and the U.S. General Services Administration (GSA) have just published the latest in a series of studies exploring how light impacts alertness during the day and sleep quality at night in daytime office workers.

The study field tested a novel lighting device developed by the LRC to promote circadian entrainment and alertness in the office environment. Nineteen participants from three U.S. Department of State office buildings in Washington, D.C., completed the three-week study. The devices, referred to as “luminaires,” in the study, were mounted near the participants’ computer monitors. They delivered morning saturated blue light with a circadian stimulus (CS) of 0.4, as well as midday polychromatic white light at CS of 0.3, and afternoon saturated red light at CS close to zero. Objective and subjective measures of rest–activity, sleep, vitality, and alertness were used to evaluate the lighting interventions. 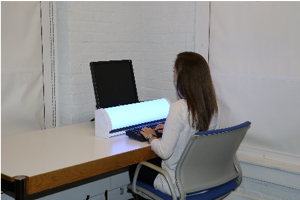 These field results are the first to demonstrate that red light in combination with ambient white light provides an effective alerting stimulus, and support the inference that light exposures, when properly applied, can promote circadian entrainment and increase alertness. 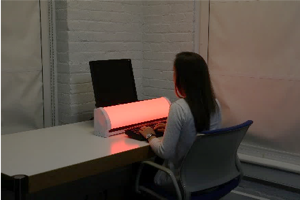 The research paper, “Light, entrainment and alertness: A case study in offices,” was published in the journal Lighting Research & Technology. Authors include Mariana Figueiro, Mark Rea, Levent Sahin, and Charles Roohan from the LRC.

Previous LRC studies measured light levels for 109 participants at five federal office buildings designed to maximize daylight availability indoors. Dr. Figueiro and her team found that even in open offices with many, large windows, office workers were not receiving enough light to stimulate their circadian system during the day, due to factors such as season, cloud cover, desk orientation, and window shade position.

In response to these findings, the research team theorized that supplemental electric lighting could be used to ensure that office workers receive enough light during the day and installed circadian-effective lighting for 68 participants at four additional sites.

The study results showed that office workers felt much less sleepy with the use of supplemental electric lighting and, as hypothesized, they also reported feeling significantly more vital, energetic, and alert compared to baseline.

“The present findings show that a tailored lighting intervention can help entrain building occupants and can increase alertness during working hours,” Figueiro said. “The ‘non-visual layer of light’ solution utilized in the present study is practical and inexpensive to implement, while helping to reinforce the bridge between laboratory results and field applications,”

“Underwriters Laboratories (UL) will soon be publishing a Design Guideline for lighting offices, factories and educational facilities aimed at promoting better sleep for day-active, night-inactive occupants of buildings,” Rea added. “This study adds even more evidence that bright light during the day promotes and consolidates sleep at night.”

How Does Light Affect Sleep?

Light has to enter the eye to be effective for circadian entrainment. People in modern society usually spend more than 90 percent of their time indoors in buildings, yet lighting indoors is typically not bright enough to stimulate the circadian clock. Typical office lighting provides less than 100 lux at the eye, whereas being outside on a sunny day will provide anywhere from 1,000 to more than 10,000 lux at the eye.

We now know that most people are not getting enough light during the day. Unfortunately, too little light during the day is compounded by too much light at night. Many people use luminous electronic devices like smartphones and tablets in the evening or stay up late working on the computer. Light from these screens makes the brain think it’s time to wake up, just as you’re getting ready for bed.

Disruption of the 24-hour rhythm of light and dark affects every one of our biological systems from DNA repair in single cells to melatonin production by the pineal gland in the brain. Circadian disruption is most obviously linked with disruption of rest–activity patterns, which can cause sleepiness during the day and insomnia at night – but is also linked with increased risk for diabetes, obesity, cardiovascular disease and certain types of cancer.

Exposure to a robust 24-hour light – dark cycle promotes circadian entrainment, which has many health benefits such as increased alertness and feelings of vitality during the day, improved mood, and better sleep at night. Recent research has shown that healthy, regular sleep patterns may even have a protective effect against Alzheimer’s disease.