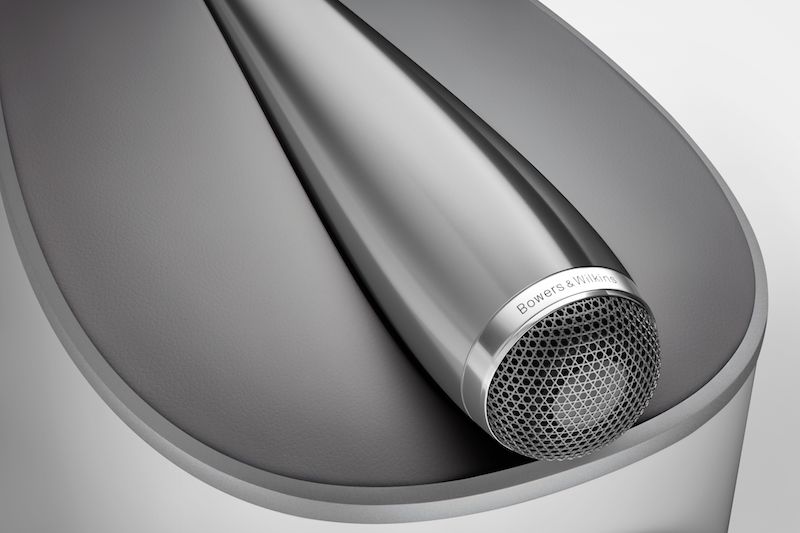 Since 1979, the Bowers & Wilkins 800 Series Diamond Series loudspeaker models has been a member of exclusive group of legendary models. The unique “Tweeter-on-Top,” combined in some models with the equally distinctive Turbine Head mid-range enclosure, are melded into a sleek form that has made them instantly identifiable. Oh, and there is a beast inside the beauty as they are also world renowned for their sonic performance. 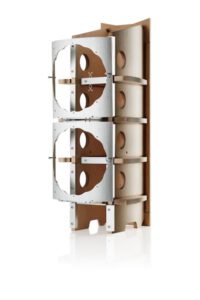 Icons tend to change very little over time, so when one does, then it is big news. That is even more difficult in B&W’s case as their products already have a reputation of being among the “best of the best.” Although the company started life with the goal of making only home loudspeakers, their products also have been widely adopted as monitors in recording studios across the globe. Thus, the unveiling of new top-range speakers in B&W’s Diamond line will generate a great deal of noise (pun intended).

As the “D4” model line designation tells, this is the fourth generation of 800 Diamond Series models, and the new range updates some of the brand’s distinctive appearance features. Most obvious, the new 805 and 804 models’ cabinet adopt the front “reverse warp” baffle cabinet look formerly reserved for the larger floor-standing models. All cabinets will now be available in Satin Walnut finish, joining the current Gloss Black, White, and Satin Rosewood options. 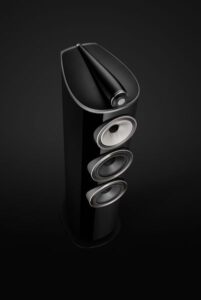 The design of speaker cabinet serves as more than just an enclosure for the drivers. In many respects it is as key to acoustic performance as any other loudspeaker component. Throughout its history, B&W has paid extra attention to that aspect of the product, seeing it as both an industrial design/appearance feature but also as an important element of determining the way it sounds.

The 800 Diamond Series cabinet top plates are now made from an all-new, rigid, cast aluminum plate, rather than wood. For an even more luxurious appearance, the top plate is covered in Leather by Connolly in either black or light gray, depending on the cabinet finish. That is the same leather found today in Ferrari and Aston Martin luxury cars as well as previously becoming famous for use in many classic Rolls Royce, Bentley, Jaguar, and Maserati models.

Another aluminum plate runs vertically inside the front of the cabinet. The stiffness of these components will significantly reduce cabinet resonance to let the listener hear the true sound of the driver array, not unwanted noise from the speaker’s structure. Solid plywood also replaces MDF for the internal bracing, even further increasing cabinet stiffness. 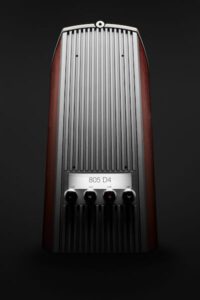 The marriage of industrial design and sonic precision extends to the trademark Solid Body Tweeter enclosure atop each of the new 800 Diamond Series models. Still manufactured from a solid piece of aluminum, its length has been extended. A similar tweeter enclosure inside the cabinet is now used for the two horizontal center channel models. Finally, the tweeter driver design has also undergone design updates and improvements.

Of course, no matter how innovative the cabinet design might be, the heart of a speaker are its drivers. While the basics of driver design have been based on concepts that date back decades, it is the improvement in the inner workings of a driver where the modern-day leaps in performance are made. In the new 800 Diamond Series one of those innovations is the new Biomimetric Suspension for mid-range drivers. It replaces the fabric-based spider that has remained basically unchanged for many years. 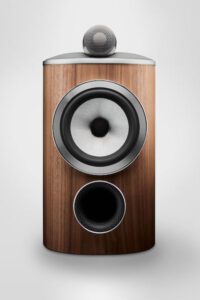 Spider Made from Composite Material

For those who aren’t familiar with spiders as a part of driver design, they are the round donut-like part that surrounds the voice coil to control its movement. Typically made of fabric, it’s solid dimensions may act as a mini speaker that sits behind the real driver. That, in turn, may create unwanted, unpredictable, non-linear effects.

What B&W is introducing in the 800 Diamond Series is a spider that holds true to the literal definition of the word. The new design is made of composite material and looks more like an open spider web than a solid disc with a hole in the middle. The open design greatly reduces unwanted air pressure so that you hear the driver cone’s vibration and resultant air movement, not that of the spider.

Other continuing parts of the B&W driver design’s “secret sauce” is the trademarked Continuum Cone for midrange and mid/base frequencies, also made using composite material. I’d love to tell you how it is made, but this falls into the old cliché of “I could tell you, but I’d have to kill you” secrecy.

The new 800 Diamond Series models fall into three new cabinet forms. The 805 D4 and 804 D4 are billed as “stereo models” with the former a two-way on-stand model, while the latter is a floor-standing model with a more traditional cabinet design that eschews the Turbine Head mid-range driver enclosure of the higher end models by placing the 5-inch midrange inside the cabinet.

At the top of the new 800 Diamond Series line is the 801 D4 at $35,000/pair. At over 220 pounds, it has all the improvements noted here to deliver frequency response from 15Hz up to 28kHz, with the quoted frequency range even more impressive at 13Hz to 35kHz. Here, the driver configuration upgrades the dual bass drivers to 10-inch versions. While the price may come across as a bit high, remember that it only slightly more than half the price of Nautilus, B&W’s long-time flagship model.

While the first generation of the Diamond Series was conceived in a two-channel, stereo era, today even high-end models must exist in a multi-channel world. Thus, to complement to five new D4 stereo pair models there are new center channel speakers, as well. Both use complementary driver components including the Tweeter-On-Top configuration with Diamond Dome tweeter, the Biomimetic Suspension built around Continuum cones, and much more. From a design standpoint they also sue the reverse wrap cabinet design and are available in black or silver finish.

It is obvious that these speakers aren’t cheap, yet for many they remain an aspirational product and a point of pride for audiophiles and home theater enthusiasts. A good example of that was when the newly appointed president of a major audio company I worked for introduced himself to the senior staff, he pointed to the fact that he had B&W speakers in his own home system as a note of cred. (And this was at a totally different company whose top-line speaker brands and models do battle with B&W in the high-end market.)

The big question, however, is whether all the new 800 Diamond Series design enhancements and improved components resulted in products that deliver on their promise and stand up to both their price and B&W’s reputation. To some extent, the true answer to that is up to you, just as it would be when comparing one expensive luxury car to another. Measurements aside, here the personal truth is in the listening.

Unfortunately, as of this writing I haven’t been able to listen to them. I had hoped to listen to them at CEDIA Expo 2021, but unfortunately the brand’s parent company, Sound United, was one of many cancellations for the show due to the Delta Variant of COVID-19.

If they pique your audiophile interest, the 800 Diamond Series will be available through B&W dealers in September.

Will this storied brand’s latest offerings continue to make the grade? Time and listening will tell.