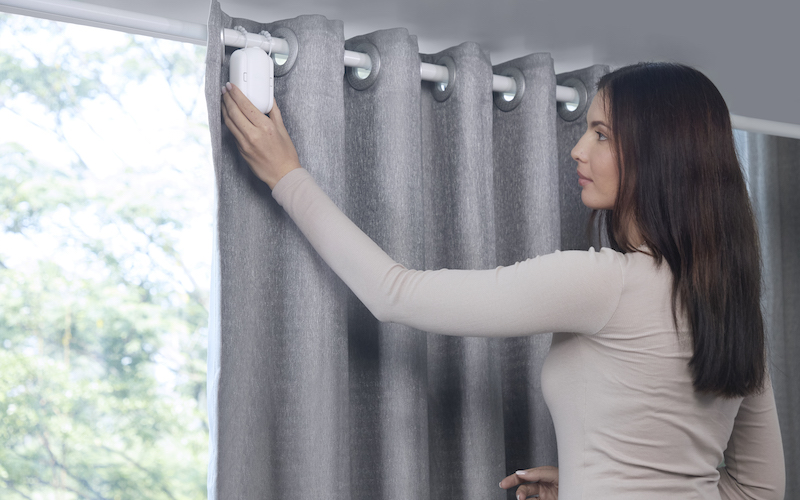 In most homes the effort to open and close window treatments to bring the beauty of the outside in results in homes remaining dark and dreary most of the time. On the other hand, if window coverings are constantly left open:

Scientists have only recently recognized how letting in the natural light and beauty of the outdoors is important for the occupants’ health and well-being. An easy way for anyone to recognize this affect is to think about your mood during the winter when the days are short, you are forced to stay indoors, and have little exposure to the sun. Compare this to the long days of summer when you are able to spend more time outdoors.

A solution to helping bring natural light into a home is to replace the existing window coverings with motorized drapes/curtains, shades, or blinds. Then their operation can be automated so that:

But, quality window coverings can be very expensive. They are an investment in the décor of a home. So, replacing existing window treatments with motorized ones can be a very expensive undertaking. For example, Crestron and Lutron manufacture very high quality motorized shades that are incredibly quiet.  But, the price of these shades can easily exceed $1000 per window. On the other hand, there are many options available to motorize existing window treatments for much less money. These allow a homeowner to retain the investment they’ve already made in the décor of their home. Below are descriptions of a few of the available options. 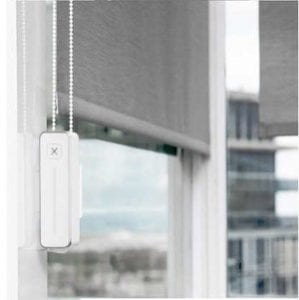 Gear is a highly intelligent shade motor that can automate almost any shade operated by a loop of cord or beaded chain including many roller shades, cellular shades, roman shades, and even some vertical blinds. Gear can be easily installed by a homeowner to automate any of these shades but professional installation is also available.

Gear can be installed on the inside, outside, or middle of a window’s frame. If the surface that Gear will be mounted to is metal or glass then it can simply be installed with the included double sided tape. If Gear will be mounted on drywall or wood then it is mounted with the included screws. Once the physical installation of Gear is complete, a simple setup procedure is required so Gear understands:

Finally, Gear needs to be paired with the free Gear smartphone app using a Bluetooth connection. The smartphone app lets you define where in your home the Gear operated shade is located, what kind of window covering the Gear is attached to, and where the Gear is mounted on the window frame. The app can then be used to operate the window shade.

Gear also includes a Zigbee radio and can be integrated with a SmartThings hub for additional control options. For example, shades can be:

Gear is powered by a small solar panel that mounts on the window and uses AA batteries as a backup for night time operation. It is rated at being able to operate any shade up to 9’ x 9’. There is a money back guarantee if Gear is unable to operate your shade. 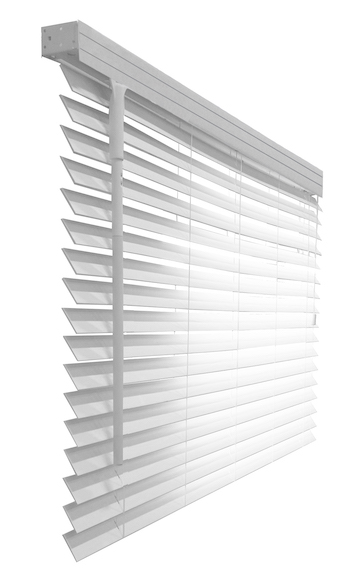 The E-Wand provides a unique solution for automating the operation of venetian blinds, vertical blinds, or mini-blinds. It is battery operated (six AA batteries) and simply replaces the wand that operates the blinds. The batteries are estimated to last one year during normal operation. The development of a lithium battery / solar power system was investigated but found not to make economic sense for customers because of the long lifespan of standard batteries.

Currently there is no ability to integrate E-Wands with a control system though a Zigbee version is in the works. The Zigbee version will be able to integrate directly with the Echo Plus, SmartThings Hub, and other smart home hubs with a Zigbee radio. For integration with other smart home platforms, such as Control4, a Zigbee bridge will be released. However, the current model includes automation features driven by integrated light and temperature sensors.

When enabled, the light sensor will open the blinds during the day to let in natural light and close them at night for privacy. This operation is integrated with the temperature sensor. During the day, E-Wand will automatically open the blinds if the room temperature drops below 69 degrees and close them if the temperature exceeds 82 degrees. These automation features can be enabled, or disabled, through small switches on the E-Wand.

There is no time-based scheduling so, for example, a shade can’t be scheduled to open at 9am. However, it is possible to disable the ability to open based on sunlight so shades in a bedroom won’t open at the crack of dawn. Integration of the soon to be released Zigbee version of E-Wand will allow for time-based scheduling when integrated with a smart home hub.

Blinds can still be controlled manually through a slight twist of the wand, or with an optional, RF remote. The remote can either be hand-held, or placed in a wall-mounted docking station.

Installation of the E-Wand is very simple. For example, when used with horizontal venetian or min blinds, the existing control wand is first replaced with the E-Wand. Then a mounting bracket is adhered, using self adhesive strips, to the blind header. Next the mounting bracket is snapped onto the E-Wand.  Finally, there is a simple procedure to program the E-Wand so it understands the open and close positions of the blinds.

Blinds can also be grouped so, for example, all the blinds in a room operate together when any blind in the group is manually operated or the built in light sensor triggers E-Wand to open or close.

The E-Wand provides a simple, yet powerful, solution for automating venetian blinds, vertical blinds, or min-blinds. And, the E-Wand will be have even more options for automation when the Zigbee version is released in the near future.

There are many choices to retrofit the existing drapery track in a home with one that is motorized. In most cases the tracks are very similar in design. What differentiates offerings are the quality of the motor and the options for automation. High-quality, insulated drapes can be very, very heavy and require a heavy duty motor to open/close them. Power Curtain manufactures track systems with a wide array of options. Their dual motor track system can handle fabric weighing up to 200 pounds across 32 feet of track. Some additional options include:

Tracks can also be ordered with curves and bends for uniquely shaped rooms or even to fit around a bay window in a home.

With the wealth of options, it is important to carefully plan an installation before ordering. Power Curtain has people available to answer questions and assist with the process. It is important to note that while a basic order of a straight track is returnable, tracks that include custom curves are not.

Power Curtain’s RJ-12 interface allows a smart home processor/hub with low voltage relays to fully control the operation of the motor. However, Power Curtain also offers the 1450U Relay Adapter where one end of the adapter plugs into the motor’s RJ-12 control port and the other plugs into any smart outlet. Turning on the outlet closes the draperies and turning the outlet off opens them. This allows the drapes to be controlled using voice commands from a smart speaker or from any smart home hub; simply by choosing a compatible smart outlet. 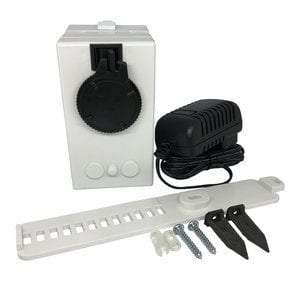 Add-A-Motor is a simple, inexpensive solution for automating light-weight drapes, curtains, and vertical blinds operated by a loop of cord or beaded chain. It is important to note that Add-A-Motor is not designed to operate shades that travel up/down or curtains/drapes on curved or decorative tracks. With Add-A-Motor, there is no requirement to replace your existing curtain or drape track. Add-A-Motor simply attaches to the existing loop of cord/chain and can operate a curtain or drape that weighs up to 35 pounds. Add-A-Motor’s simple design does limit the length of the traverse that the window covering can make when opening and closing:

The price of Add-A-Motor is low because it has been around for over 20 years and doesn’t include the electronics of today’s smart, IoT devices. Instead it is an entirely mechanical device with a single direction switch and two internal relays to control the operation of the motor. Intelligence can be added by plugging the 12 volt power supply into a smart outlet, remote-controlled outlet, or even a mechanical timer switch typically used for automating lights before smart outlets existed.

Installation of Add-A-Motor is very simple. For example to install Add-A-Motor to control a curtain or drape:

The above steps are abbreviated so the instructions should be consulted during actual installation.

To automate operation of the window covering, the DC power supply can be plugged into a smart outlet. Then, for example, an Alexa routine could be created that would respond to the command, “Alexa, open the living room curtains.”  The routine would simply turn the smart outlet on for the time it takes to open the window covering and then turn it off. A similar Alexa routine could be created that would take the exact same steps in response to the command “Alexa, close the living room curtains.”  It should be noted that Add-A-Motor simply toggles between open and close so it is up to the user to keep track of its status.

Overall Add-A-Motor provides a very economical way to automate light weight curtains, drapes, and vertical blinds. Automation is limited because there is no feedback on the actual status of the window covering (open or closed), but that is the tradeoff for the money saved compared to other solutions.

The SwitchBot Curtain is very simple to install. The device consists of a central motor and side-mounted carriers with attachments based on the type of curtain rod/rail the unit will be hung from. As shown in the above photo, the unit then simply snaps in place with its drive wheel in contact with the curtain’s rail/rod. It should be noted that the SwitchBot Curtain’s small, battery operated, motor does have its limitations. It is only rated to open/close a curtain of up to 17 pounds.

The SwitchBot Curtain connects to the smart phone app using BlueTooth. With the app you can:

The SwitchBot Curtain even supports manual operation of the curtain. The device senses a gentle tug on the curtain fabric and will then open/close the curtain without the need to use the app.

Finally, when coupled with the SwitchBot hub, SwitchBot Curtain is connected to your Wi-Fi network. This provides a wide array of smart home integration possibilities.  It can then be controlled remotely over the Internet using the app, through IFTTT, and using vice commands with Alexa, Google Assistant, and Siri Shortcuts.

Hopefully, these products provide you with reasonably priced options for expanding the capabilities of your smart home.