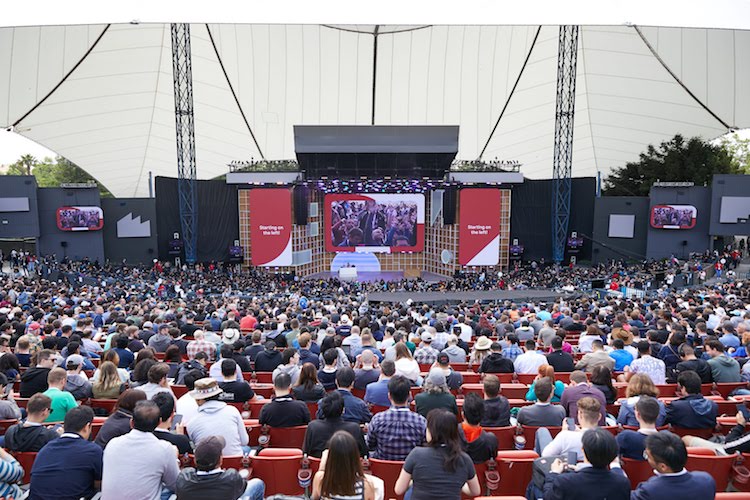 Google’s annual “I/O” event is often where new products are announced, but the event’s primary audience are the developers who create the apps and software that accompanies and must work with new products and major software release updates. After all, new hardware is useless unless it works with a full ecosystem of apps.

With that in mind, the keynote presentations at this year’s Google I/O, held on Tuesday, May 7, fulfilled both expectations. There were certainly a few new products announced, and well as new software.

There was no better example than the unveiling of the new Google Nest Hub Max and updates to the capabilities of the Google Assistant. From a pure hardware standpoint, Hub Max’s visible improvement is the 10-inch, 16:10 aspect ratio (1280×800) LCD screen, which is the same size as the second-generation Amazon Echo Show. This is also larger than 7-inch screen on the current Home Hub. Audio now comes from a 2.1 array, compared to the current model’s single full-range speaker.

A new built-in camera feature has been added to the Hub Max, as well, evening the feature score with other devices on the market. And, with new features coming from Google Assistant, it also adds a new range of capabilities.

An obvious application of the new built-in camera is the ability to make video calls using Duo. Thanks to facial recognition and a bit of AI tech, it also enables facial recognition and the ability to switch to the personal preferences of the user. The camera has wide-angle capability, and it follows the movement of the subject person. The Hub Max also offers a physical, on/off switch for the camera and the mic. No more putting a piece of tape over the camera for privacy and security. This option is not available on competitive products.

Another interesting feature of the Hub Max is that the ability to stream YouTube TV. Pricing will be $229, with the Gen.1 “camera-less” model dropping from $149 to $129.

Along with the introduction of the hardware is some important software and branding news. First, note the name change to Google NEST Hub Max. This signals the overall Nest branding of all home-centric products from Google, with the prospect of tighter integration. A good example is that the aforementioned camera in the Hub Max will also work as a “Nest Cam” and meld in with other Nest ecosystem products in the home.

The software side starts with Thread compatibility, but there is much more than that. Quoting directly from Google’s press announcement, “…we’re winding down the Works with Nest developer program and delivering a single consumer and developer experience through the Works with Google Assistant program.” Part of the unification starts with, again in Google’s words, “…beginning this summer, anyone with a Nest Account will have the option to migrate their Nest Account to a Google Account, which comes with the added benefits of tools and automatic security protections, like 2-Step Verification, notifications that proactively alert you about unusual account activity, and access to Security Checkup…”.

The tough part is that anyone currently using or maintaining “Works with Nest” products as part of a broader control system, whether with IFTTT or systems such as Control4 and Lutron will soon have an, “it does not work with Nest” problem. C4, Lutron, and others are already on the case to migrate or patch their software to accommodate this change, but it may result in a rocky road in the near term for both residential systems professionals and advanced DIYers.

Pixel 3a and Pixel 3a XL Phones

Unless you have been hiding under a rock, you have already heard about the new Pixel 3a and Pixel 3a XL phones. Already available, they are considerably lower priced than the current Pixel 3 models with a robust feature set that is, on one hard very camera-oriented, while at the same time built to accommodate the forthcoming Android Q operating system.

Keeping up with Apple iOS, there is a heavy emphasis on security and privacy, speech recognition, and even integration of AR-like presentation of apps like Google Maps and live captioning.

Key to these collective goals is the ability to perform any tasks “on device” for both the Pixel phones and Hub Max. That keeps sensitive data local and off the cloud. This will also be key to acceptance of the increased attention to “health and well-being” apps. You will even be able to shoot an image of a restaurant check and have the phone figure and suggest tipping, and then tell you how to split the tab among your fellow diners.

Another interesting focus for the nexus of hardware and software was Google’s introduction of features for accessibility. The new Project Euphonia, as an example, is still in a research phase, but the demo showed how it uses AI to understand and transcribe the speech for those with speaking difficulties. Live Caption will show the content of audio from videos, podcasts, and more. Live Relay will facilitate conversations between the hearing and hearing-impaired. Speech will be converted to text, while text will be converted to speech.

A final tie between what the hardware can do and what the software makes possible is centered around the Google Assistant and Android 10. More voice control, Waze integration, and a variety of automotive advancements will be highlighted for use in cars and trucks. A new Local Home SDK will allow Google Home and Nest devices to act as hubs, cutting down on cloud hops.

Final notes include the reveal that there will be over 20 carriers this year with 5G support, and that will include forthcoming Android phones, though not the new Pixel 3a models. Android for “folding” phones is also said to be on the way from “multiple ODMs.” A new Play Store for Android TV will also be added.

Before we close, no report on an event such as this would be complete with what was not shown, announced, or given much attention. Sorry, nothing to report (yet) about new Chromecast. Nothing to speak of on a new Wear OS or watch hardware. There were demos of the “Stadia” game controller, but we’ll have to wait for pricing, console, and release date information.

Suffice to say that these announcements will impact most of us in one way or another, even for diehard Apple product and software as Google touches almost all of us with products or services. How will Apple respond to try to one up all of this? Stay tuned for our report on Apple’s WWDC in early June. Of course, we’ll also keep you posted what these products and services are like once they reach the market over the next few months.