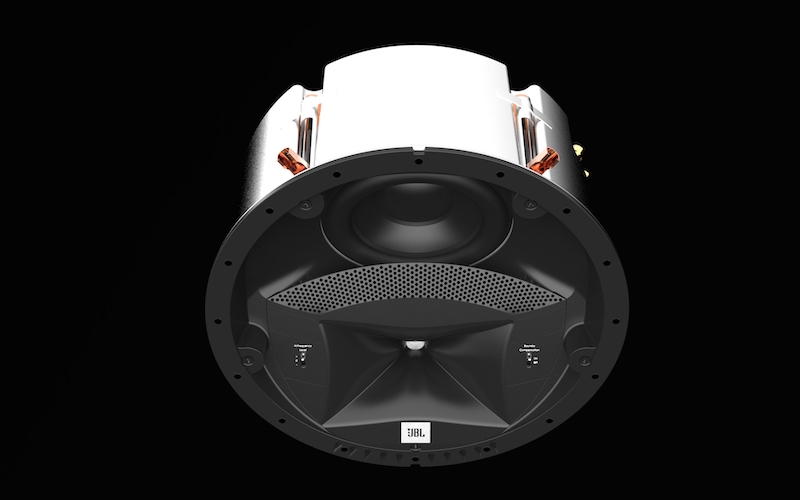 Going ‘Round’ with JBL Synthesis

Harman knows that no other audio company can match its D2 compression driver and High-Definition Imaging (HDI) waveguide technologies and components. So, the company is leaning into its proprietary and patented ultra-performance tech by integrating it into just about every loudspeaker in its premium JBL Synthesis home theater line – even if it seems impossible to do.

For the SCL-5, Harman took the same compression driver technology used in previous SCL models and squeezed it into a round footprint, alongside a 6.5-inch woofer for use as overhead height channels in immersive audio (Dolby Atmos, DTS:X, Auro-3D) room designs, or as an overhead LCR (left-center-right) surround (if the design requires all speakers to go in the ceiling).

“From a performance standpoint, there’s no in-ceiling speaker that can do what this can do,” said Jim Garrett, Harman’s senior director, product strategy & planning, luxury audio. “The LF (low-frequency) extension capability is mighty impressive for an in-ceiling speaker, coupled with low-distortion, dynamic mids and highs, thanks to our use of a legit compression driver.”

Whereas previous SCL in-wall and in-ceiling designs required a somewhat bulky 16-inch square grille on the outside, the SCL-5 is self-contained enough to use a magnetically attached, zero-bezel 12.5-inch round grille. Additionally, JBL added a plenum-rated metal back box onto the speaker to keep it isolated from adjacent rooms and to improve performance.

“We have SCL-2, 3, and 4 now, but one of the comments we got back on is this range is that the 16-inch-square footprint – from a ceiling standpoint – is too large,” Garrett said. “And, people just want to come into the room and not see the equipment. They want to have it, hear it, and enjoy it, but they don’t want to see this gear. The smaller 12.5-inch diameter reduces the visual footprint considerably.”

Whereas most companies use “doglegs” to mount their in-ceiling speakers, Harman calls its mounting mechanism “cat claws,” for the way the mechanism springs out when inserted into the ceiling to support the heavy speaker before screwing it into the drywall.

“There’s a performance reason for angling the woofer, but it’s mostly about trying to get everything to fit,” Hagen said. And, where the waveguide overlaps the woofer, Hagen perforated it so that the woofer can effectively “see” through it.

“It was fascinating to watch our team figure out how to make this design work,” Garrett said. “It was a big challenge to get this much horsepower into a footprint this small. You’re dealing with the depth of a wave guide and compression driver hanging off the back. They spent a whole lot of time trying to figure out this part of it.”

The result, Garrett said, is an in-ceiling speaker that can achieve higher SPLs, while audiophile in character. “It can play dynamically loud without losing any of the details.”