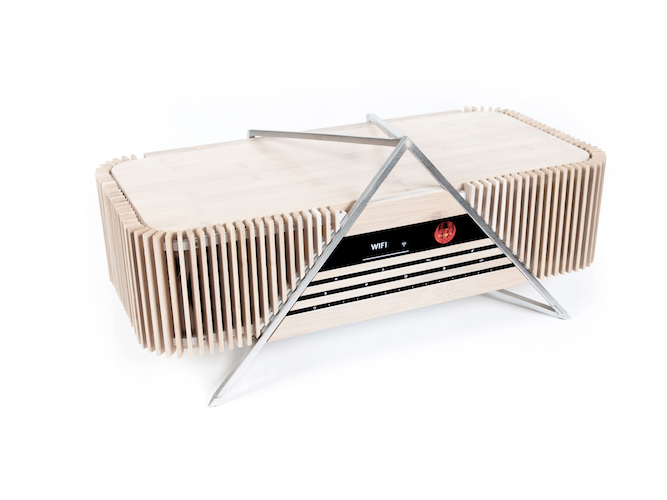 iFi’s new wireless music system, the Aurora, brings together a collection of proprietary technologies to deliver a tabletop, all-in-one system clad in bamboo and elevated by a distinctive aluminum frame.

The aesthetic was created by French product designer Julien Haziza, inspired by the architecture in Tokyo’s Omotesandō and Harajuku districts. Six drive units nestle behind the bamboo fins that curve around the Aurora’s sides, with a further two bass radiators underneath. The system’s control panel sits front and center, with touch-sensitive controls and an OLED display inlaid with bamboo.

The Aurora connects to a home Wi-Fi network, enabling users to stream music via their favorite apps, or play audio files stored on networked devices such as computers and NAS drives. Bluetooth is also included, so that users may stream directly from any smart device.

The Aurora is hi-res audio enabled, supporting data up to 32-bit/192kHz without conversion or down-sampling via Wi-Fi, USB or Ethernet cable. Bluetooth streaming also delivers much better sound quality than is typically the case, engineered by iFi to be less ‘lossy’ than off-the-shelf Bluetooth solutions. The latest high-quality Bluetooth codecs are supported, including aptX HD, LDAC and LDHC, as well as AAC.

Connecting to a Wi-Fi network is simplified with a push-button WPS set-up. Linkplay’s MUZO Player app – or any UPnP/DLNA streaming app – may be used to configure the system and control music. AirPlay and Spotify Connect are also supported.

Several Auroras may be linked together on a Wi-Fi network to make a seamless multi-room system, playing in-sync or controlled individually. Whether streaming music from services such as Spotify or Tidal, or surfing the thousands of internet radio stations available from an app such as TuneIn, the Aurora has your digital audio lifestyle covered.

At the Aurora’s heart lies proprietary amp technology that iFi calls “PureEmotion” – a hybrid circuit design comprising several key stages. The first of these – the preamp stage – incorporates a Russian 6N3P valve (visible through a window next to the OLED display). This takes the analogue audio signal delivered by the Aurora’s DAC (Digital-to-Analogue Converter) circuitry – based around a chip from ESS Technology’s renowned 32-bit Sabre DAC family – and adds gain in preparation for further amplification, imbuing the sound with pure tonality, open imaging and natural fluidity.

The resulting low-level signal then passes to the power amp stage – iFi’s ‘current multiplier circuit’. This is a highly efficient switching power amplifier, a description it has in common with Class D amplification – but there the similarity ends.

The PureEmotion amp stage delivers a total of 320W to power the Aurora’s custom-made speaker drive units. The main drivers, of which there are four – two firing from the front and one from each side – sport a 120mm cone made from coated long-fibre paper, a material selected for its optimal balance between stiffness and self-damping. This is coupled to a large magnet, a basket that resonates above the audible range and extensive measures to ensure excursion is controlled and damped mechanically, so that clarity and control are maintained even at high volume levels.

Unusually, these main drivers are deployed in a wide-bandwidth role to cover the vast majority of the audible frequency spectrum, rolling off toward very low and very high frequencies. The drive unit design, together with the inert nature of the Aurora’s housing – stiff, well-braced, naturally sound-absorbent bamboo with strategically placed damping material – enables a flat frequency response from around 60Hz to 8kHz. Avoiding the need for a crossover to hand over from one drive unit to another at critical frequencies enables excellent

The Aurora incorporates a “room correction” system called ART (Automatic Room Tailoring), entirely developed in- house. At the press of a button, six ultrasonic sensors measure the distance to the surrounding walls using ultrasound. Then, a 32-bit ARM Cortex microprocessor adjusts the output from the driver array to precisely tailor Aurora’s performance. The effect is similar to the adjustments made by a live sound engineer at a mixing desk when adapting sound to suit different venues.

All the adjustments are made strictly in the analogue domain, without relying on DSP or feedback in the manner of many other room correction systems. This enables much finer and more accurate tailoring of the sound, reacting to room modes and reflections from walls without attempting to “neutralize” the sound in an unnatural way. Wherever the Aurora is placed – in a large room or a smaller one, in a corner, against a wall or in free space – it always performs at its best.

In addition to wireless connectivity, there are plenty of cable inputs to connect source devices. Optical, coaxial, USB and Ethernet inputs cater for digital sources, while 3.5mm socket provides an analog input. There is even a slot for microSDHC cards – upload music onto a card and play it on the Aurora.

One thing that isn’t built into the Aurora is voice control. Integrating Alexa, for example, would have compromised performance, both in terms of limiting audio resolution to 16-bit/48kHz and re-focusing the design to prioritize the audibility of voice commands over outright sound quality. However, those who wish to incorporate Alexa may do so easily, by linking the Aurora (or several Auroras in a multi-room context) to any Echo speaker, from the Input upwards, via Wi-Fi or Bluetooth.