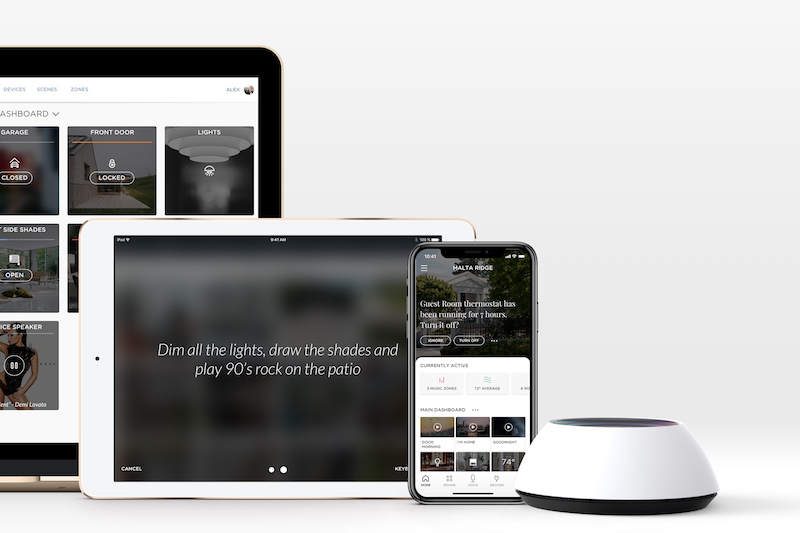 Alexa and Google Home are inexpensive solutions to adding voice control to an automation system. Given this, one has to wonder why anyone would use Josh, from Josh.ai, instead. To answer this question I spoke with Nader Dajani, head of business development at Josh.ai.

A Deeper Understanding of Your Home

A key aspect of controlling a smart home is the commands structure. Amazon, for example, decided that to add a new skill to your Alexa device you would use the keyword “open”. Their decision to reserve the word “open” for skills conflicts with using it to intuitively control drapes, shades, an overhead garage door, a motorized window, and more. So, instead of simply saying “Alexa, open the garage door”, you have to:

The more unique devices added to a smart home the more complex it becomes and the harder the home is to control by voice.

Josh goes further in trying to simplify how people control their home with voice commands. A challenge, which I have talked about in other posts, is that different people in a household may refer to a room, or device, differently. When you enter a home from the garage of a home and that room also houses the washer and dryer is the room called the “mudroom” or the “laundry room”?

Josh includes the ability to create aliases for any room or device so different people can call the room, or device, with whatever term makes sense to them. Nader also talked a situation where Josh would periodically misunderstand when one customer said “foyer” and would interpret it as “for you”. The addition of “for you” as an alias for “foyer” quickly solved the problem.

However, because Josh is dedicated to smart home control there are things you give up compared to Alexa and Google Home. For example, Josh can answer general queries that can be answered by searching the Internet. But, you can’t order an Uber, synch with your calendar, or perform other “concierge” services.

Josh can also be installed both as a front end for other control systems (Crestron, Control4, Savant) or as a standalone system. On its own, Josh can control products from Lutron, Sonos, Nest, and more. However, if, for example, you want to control a distributed audio/video system with a large matrix switcher you are going to need to a back end control system with Josh acting as the voice control interface.

The Next Step for Josh.ai? Need Anticipation.

Another important thing to know about Josh is that providing voice control of smart devices in a home is just the first step in the company’s plans. Josh.ai’s goal is to provide advanced AI to so the Josh can anticipate people’s needs based on how they use the home and take actions to help them before they realize they need assistance.

The first example of this is recommendations that are available in the Josh App. For example, the Josh app might inform a homeowner “five lights have been left on in the dining room, should I turn them off for you?” This isn’t to say that Josh isn’t going to have competition in this space. Amazon has recently rolled out Alexa Hunches that work very similarly.

Price is (Always) a Factor

Finally, cost is another difference. Amazon and Google’s devices can easily be purchased for under $100. Josh.ai doesn’t publish prices but it will cost a good deal more and is only available through dealers. There is both a hardware cost for the Josh micro microphone/processor/speakers and a software licensing cost based on the size of the home being automated.

Is Josh. worth it? That depends on the price you are willing to pay for convenience, simplicity, and a company focused on providing advanced AI capabilities in their product. Using Josh for smart home control with Sonos One speakers, that can also accept Alexa voice commands to provide additional functionality, is a perfect match for the customer with the financial resources to afford the best.

To read more from Jay Basen, visit his blog, Topics in Home Automation