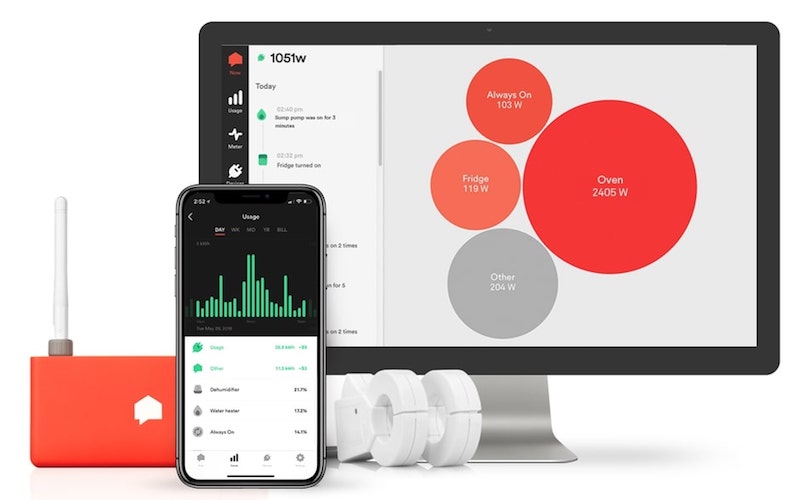 In a previous article that was published in Residential Tech Today, I wrote about the Curb, Sense, and Smappee energy monitors. After writing about these new energy monitors, and the features they offered, I decided it was time to replace my ten year old energy monitor.

All three energy monitors included much more advanced features than my 10 year old model. In the end I chose the Sense energy monitor as my replacement because:

Installation of the Sense Energy Monitor

For many people the Sense energy monitor will be easy to install. For me the installation was somewhat challenging. If your circuit breaker panel is mounted to a wall with the sides of the panel exposed and you have two unused circuit breakers then the installation should be relatively simple. Unfortunately, my panel was mounted between two studs of one wall in my garage, the garage walls are covered with drywall, and I didn’t have any spare circuit breakers in my panel.

To overcome this I had to install two tandem breakers, route all the wiring for the Sense energy monitor outside of the panel, and mount the Sense inside a separate enclosure. So, instead of the installation taking under one-half hour it ended up taking me several hours. But, in the end the installation was clean and professional.

With the physical installation done, I powered up the Sense. Using the Sense app I was quickly able to connect the Sense to my Wi-Fi network and start the 24 hour process where the sense checks the installation and begins to learn about the devices using energy in your home.

I also found that after completing the installation process I had received an email from Sense with useful information to get me started.

Using the Sense app, I configured the system to notify me whenever it discovered a new electrical device in my home. Less than two days after I powered on the Sense monitor it identified its first device, my furnace. At the same time it also started reporting the phantom power use in my home at 296 watts.

Phantom power is the power used by always on devices, such as my smart home processor, smart light switches, cable box, etc. Given how automated my home is, and the number of always on devices it included in the automation system, I was happy with this as, according to the Sense app, the average phantom power among all Sense owners is 288 watts.

I also received notification of another heater. This could be anything from my wife’s hair dryer to one of our countertop kitchen appliances. Again, after setting up notifications I was able to figure out that this was our toaster oven.

After 2 weeks with Sense it has uniquely identified seven devices in my home. Not bad, but at the same time, it is frustrating, to me, that it hasn’t been able to identify three key appliances:

These three devices are ones that I had, with my old energy monitor, created notifications to my wife and myself when they ended their cleaning/drying cycles. These notifications have been very useful as they kept us from, for example, forgetting we had a wet load of clean clothes in the clothes washer or ending up with pile of wrinkled clothes in the dryer. Unfortunately, there is nothing I can do to speed up the identification process. All I can do is try to be patient and setup reminders on our Alexa devices every time we use these appliances.

After another two weeks I received a notification from Sense that two more devices had been found; “Washer” and “Heat 4”. I suspect that these are the washer and dryer that I have been waiting patiently for Sense to discover. To test this theory out, I’m going to take the drastic step of doing laundry.

A second weirdness is that the final notification that the washer turned off was several minutes before it finished its spin cycle. Sense’s custom notifications can be configured to handle this kind of delay but unfortunately, the triggers to IFTTT aren’t as flexible. Trying to compensate, in my automation system, for the dropouts in power usage during the washing cycle without delaying sending an end of cycle notification to my wife and I has proven to be challenging.

Unfortunately, the new “Heat 4” device isn’t my dryer. So, I’ve turned on notifications for when this device turns on/off to help me figure out what it is.

Another few weeks have passed and Sense has finally identified my dryer so my wife and I again have notifications to help us with our laundry, though I’m still trying to make the washer notifications more reliable and consistent.

The time it takes for Sense to identify devices can be frustrating. Watching the user forum, this is the most common complaint about the product. I understand the complexity of what Sense is trying to accomplish but, like others, I wish they could find a way to speed up the process.

Sense has a very active community forum and is very responsive in replying to user posts. For example, there was a very active discussion on Sense integration with SmartThings with various people debating what would be needed from this integration. With the large number of posts it is a wealth of information to help people troubleshoot problems and for new users to find out more about using the product.

In my previous article I talked about the need for all manufacturers to leverage their communities to help people save energy. Sense has just announced Sense Saves; a new forum for people to share their stories on how they’ve saved money on their energy bills. It should be noted that Sense Saves isn’t designed to replace Sense’s community forum where there are discussions on device detection, feature requests, the ability to ask technical questions, and more. It is a much more targeted resource for people to share and learn about techniques to save energy.

Sense Saves has only been active for a very short time but there are already a good collection of user written stories on topics including “Water heater savings,” “Vacation home electric way too high for years,” and “Sense identified bad furnace relay = $750 savings”; to name a few.

The first thing that Sense made me more aware of was the baseline energy consumption of all the electronics in my home. My “always on” power consumption was 278 watts or about $120 per year. Yikes! The question is, what can I do about it?

The first step I took was to start thinking about all the devices in my home that are always on using power:

The first question is which of these devices shouldn’t be powered off under any circumstances.

In addition, my stove and clothes dryer would be somewhat challenging to power off because they are both on high current 240v circuits. It would also be a pain to power off my microwave because I would have to reset the clock every time. This is the same situation for my water softener. Finally, while it is a known energy hog, I don’t want to power off my cable box because it is a DVR and I would certainly miss recording shows if it wasn’t on all the time.

My next step was to investigate how much energy each of the remaining devices use in standby mode. A smart plug is going to use about 2 watts of power so you have to weigh this against the standby power use of each device to see whether it makes sense to use one to power the device off/on.

Clearly there is little value to invest in a smart plug to completely remove power from any of these devices when they aren’t being used because they consume so little power when in standby mode. I could plug the TV, A/V Receiver, Roku, and Blu-Ray player (which are all located in a single cabinet) into a power strip that would be plugged into a smart outlet. But, this adds very little value because together they only consume less than 6w. After plugging them into a smart outlet I would save just over 3w; which would have a minimal impact on my electrical bill or the environment.

On the other hand, this exercise did a great job of raising my awareness of:

As I purchase new appliances and electronic devices, or replace ones that have failed, I am going to be much more watchful of the power they consume while being used and in standby mode.

After using the Sense app to tell the Sense system that I had added these smart plugs to my system, it only took a few minutes for it start reporting the power being used by the devices plugged into the smart outlets in the Sense app; very impressive. I now know that my network hardware is using 50w and my A/V and Automation hardware (with the A/V system turned off/in standby) is using 74w. This accounts for almost half my “phantom” power.

While I’ve found Sense to be very useful, there are a few areas where I think it could be improved

Overall, I really like Sense. It has made me more aware of how power is used in my home. But, Sense still is, in many ways, an emerging product. The company is working all the time to improve Sense’s capability and accuracy in applying energy signatures to devices in a home. I believe that, over time, the product will get better, and better; offering more features and improved accuracy to its users.