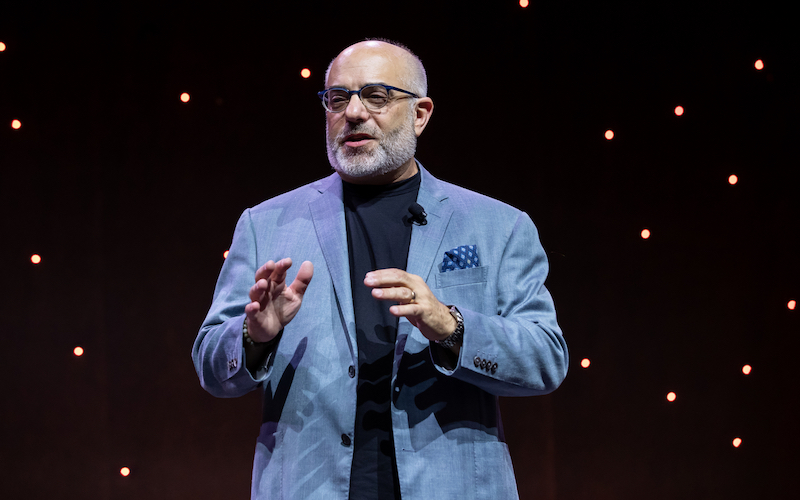 A Chat with Mitchell Klein

Mitchell Klein is learning the mandolin.

It’s what you’d expect from Mitch – even though he’s in the midst of a vacation when we sat down to talk, he’s always expanding the base of his knowledge, whether that’s in the realm of music or microchips. He’s been a custom integrator, an exec at URC, a CEDIA president – and a working musician. And the sum total of all of those experiences and accomplishments have resulted in Klein being honored with the 2019 CEDIA Lifetime Achievement Award.

From Hi-Fi to This Old House

Klein – who’s now director of the Z-Wave Alliance – got his start like a lot of other men and women in the CEDIA channel, in the realm of live sound. But Klein wasn’t mixing the music, he was playing in the band. Klein became a bass player as a teenager because there were too many guitar players in his high school jazz band. “I’m like, okay, I’ll play bass,” Klein recalled. “I’ve always been that person to say, ‘Let’s go explore; let’s try something new.’”

Klein realized pretty quickly, however, that the vast majority of professional musicians aren’t making Beyoncé money. In fact, most are barely surviving. But reproducing music accurately? That held Klein’s interest, and that interest became bankable when he was offered a managerial spot at a hi-fi store called Tweeter, Etc. From there, Klein eventually made the leap to custom integration, founding a firm called Media Systems.

“That firm saw a lot of firsts,” Klein said. The company was CE Pro’s first “Dealer of the Year,” for example. All of this was happening at Media Systems’ HQ in the Boston Design Center, which got the attention of a number of architects and interior designers – but not in a good way. “Back then, they wanted nothing to do with us,” Klein noted.

Public television, however, did want something to do with Media Systems, and gave Klein and company an on-camera gig as part of a renovation featured on the show, This Old House. Klein’s ability to make an AV system unobtrusive was a fairly unique talent back in the mid-’90s, and the taping was a hit.

There was a downside, though, involving late-night calls to troubleshoot new tech. But the toughest for Klein? Suffering through the economic slowdown that immediately followed 9/11. After experiencing the pain of shuttering a business, Klein went about taking URC from a “hand-held remote control company to a whole-house interface business,” and from there wound up in the director position at Z-Wave.

Early on, Klein realized that the association wasn’t functioning as best as it could: “We recognized that we were always so focused on the technology, that we were ignoring a really key ingredient, which is the business. And the other piece was, at the same time there was legislation in my home state of Massachusetts that essentially would have put all of us out of business. The bill would have required licensing for our people – it was geared toward electrical contractors.” That led Klein to form what would eventually become CEDIA’s Government Affairs Department, which tracks legislation all over North America with the help of a grassroots network of member volunteers.

From balancing the books to taking the notion of certification from pipe-dream to concrete reality, Klein’s tenure with CEDIA still resonates to this day. But that’s not why he volunteered. “What I love so much about CEDIA is working with the other volunteers and bringing people in and recognizing other people’s passion, leveraging that passion and letting them run with it, let them go with it.”