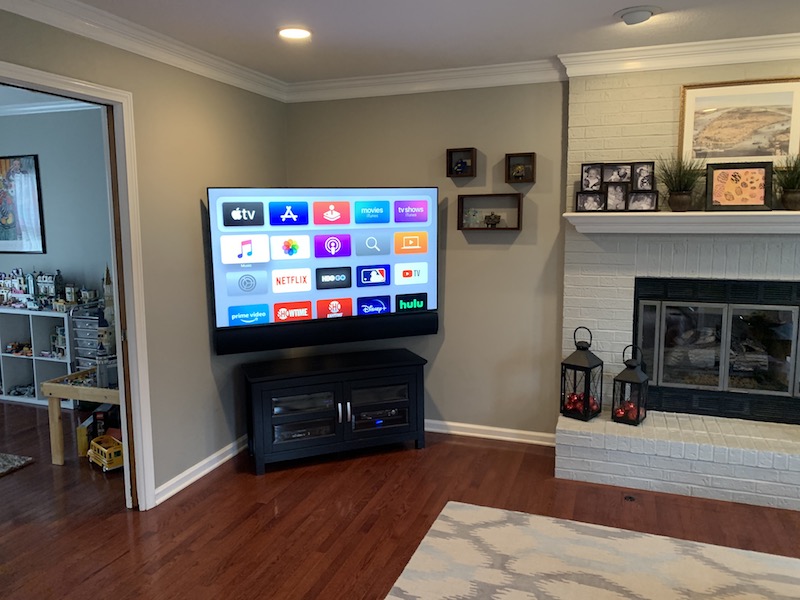 Rounding Out My System

Despite my role as a tech magazine editor, over the years I’ve been a fairly reluctant smart home customer, resisting offers to install a full-featured control system from the various pro-quality manufacturers, such as Crestron, Control4, Savant, URC, or RTI. But, last fall, something finally clicked for me, and I decided it was time to commit to completing a system that had been built in bits and pieces over the 13 years I’d lived in my home.

But, first a little background.

Back in 2008, after writing about residential tech for almost a decade, my wife and I moved with 2-year-old daughter Ella and dog Otis, out of a tiny one-bedroom New York City apartment into our first house – five-bedroom suburban residence in the thriving Indianapolis suburb of Carmel.

From the moment we decided to moved, I was all in on the idea of a building a dedicated home theater in our finished basement and was fortunate to use industry connections to build a pretty cool, combination of projector, screen, 5.1 surround sound system, and even a starry ceiling made of LED fiber optics lighting. But going any further into the house felt like too much of a commitment and maybe too much of a retrofit mess, despite the convenience of a pair of in-ceiling speakers in both the kitchen and the family room, and prewiring for a pair of speakers on our patio.

I did take some baby steps a few years later, when I accepted an offer from Nuvo (now owned by Legrand) to install a multiroom streaming audio system that was distributed over the existing powerlines in my house. At the time, they upgraded the in-ceiling speakers in our family room and kitchen from 6- to 8-inch models and added single-point stereo speakers in both our dining room and upstairs hallway to expand the system around the house.

I figured at the time that this was simply the best way to retrofit a multi-room audio system into a older house. What I came to dislike, however, were the various separate control apps and islands of incompatible systems (family room entertainment system, basement home theater, multi-room audio system, outdoor speakers), entry-level Lutron lighting control system, throughout our home.

Just a few years ago, driven by the need for a more robust network backbone, I accepted an offer to have Indianapolis-based custom integrator Millennium Sounds enhance the system quite a bit with the installation of a Pakedge home network, a Control4 remote control system programmed to run our family room equipment stack (Hitachi plasma, AV receiver, cable box, Apple TV, Blu-ray player, and Wii console), and a full replacement of my entry-level Lutron lighting control system with Control4. 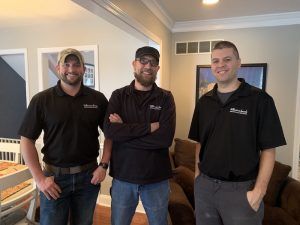 At the time, an upgrade to an enterprise-grade network was a huge motivation, but the fun part was experiencing my first custom-installed lighting control system. We’re talking custom-engraved, multi-button keypads controlling groups of lights at pre-determined dimming levels of our choosing. While house-wide dimming in, say, “Day” or “Night” modes is a huge time-saver and the unified look of the toggle dimmers aesthetically pleasing, having an “All Off” button to shut down the house at night or on the way out the door, was the big winner in our house.

Add to that a Control4 remote control in the family, replacing years of frustrating DIY-programmed remotes, and I was starting to understand how great a professional installed, pro-grade home control system could be. But, I felt like I was being wasteful replacing the existing Nuvo system for multi-room audio. 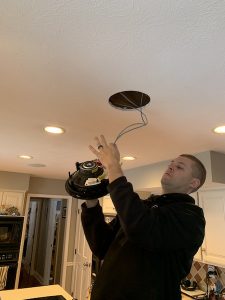 Eventually, my (and let’s be honest, my family’s) frustration reached a boiling point with having too many separate systems and a music distribution system that was becoming less reliable due to either network incompatibility or power surges. Pulling perhaps my last “tech editor card” out of my deck, I contacted Control4 again, which had acquired respected speaker brand Triad before being acquired as a company by multi-faceted solutions provider SnapAV. Encouraged by my need to tie everything together (which is practically SnapAV’s mantra), my original integration firm, Millennium Sounds, to pulled together a proposal to expand, replace, and unify my system. SnapAV agreed.

After years of thinking that a more involved retrofit (one that involved running ethernet and speaker wire throughout the home rather than piggy backing on my home’s line-voltage wiring) would be impossible, Millennium co-owner Bill Lehman and technician Andy Bang convinced me that my basement drop ceiling and crawl space enable an easier retrofit than I had realized. It would prove to be a little more of a challenge to get upstairs, but the creative use of an HVAC air duct enabled the installation team to switch from a proposed Triad One with a wireless remote station for a Control4 audio system to a hardwired set up. 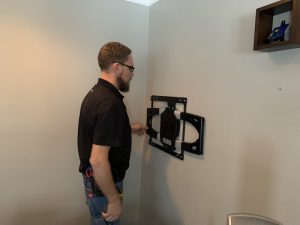 “Wired is always preferred when relying on the network to transmit audio,” Bang noted. “We were happy that we were able to get a wire back to the home base in the family room.”

Three seven-inch glass-edge T3 touchscreens replaced the controllers from Nuvo in kitchen, dining room, and upstairs hallway. Triad does not make a dual-voice coil in-wall speaker, so there was not a direct replacement for the Nuvo speakers I already had in the dining room and upstairs hallway, so we left those alone. We did, however, replace the existing 8-inch Nuvo speakers in the ceilings with 8-inch speakers from Triad (Silvers in the family room to match the Triad Silver Soundbar for distributed music or as theater rear speakers and Bronzes in the kitchen.

The Triad Silver soundbar was ordered in a custom width to perfectly match our new LG 60-inch TV exactly and replacing a tower speaker (left-center-right) combo that my wife was ready to clear out of the family room. A SnapAV Strong Razor Series articulating mount for large displays was expertly installed by the Millennium team to hold both the TV and robust soundbar.

“As a double-arm mount, it will hold a heavier display, and it’s rated for the weight of both the soundbar and the display together,” Bang said. “You have to take a beefier mount into consideration when you’re doing that.”

A Triad subwoofer was hidden behind a sofa end table without the need to run more speaker wire under the floor, thanks to a SnapAV Episode ES-SUB Wireless Kit. 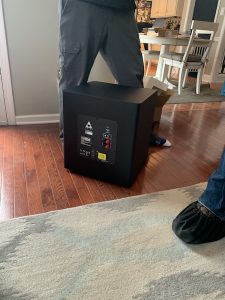 While they were at it, Millennium upgraded my Control4 system to an EA5, which is positioned in the company’s product lineup just under flagship CA10. “That’s what every bigger, multi-room installation should have,” Bang explained. “It allows us high-end audio with a nice digital analog converter (DAC). And we’re running that into a Triad audio matrix switch, and into a Triad amplifier.”

Improving on the way I had jerry rigged my Nuvo system to link to a relatively new 4.1 outdoor speaker system from Origin Acoustics, the Millennium team programmed the Control4 system to distribute streaming music outdoors via the Control4 app. Now, for the first time, I can change music and control volume from my deck.

The whole system, as it has come together makes me truly appreciate the professionalism and expertise that a veteran integration/installation team can bring to a project like this. My audio system has worked flawlessly since the installation back in December and I can discern an improvement in audio quality in the in-ceiling speakers and love the streamlined look and performance of the Triad Silver sound bar.

I’ve experimented with switching my family room AV receiver from Dolby surround mode to “all-channel” surround and have found that the localization of the ceiling speakers allows us to keep the TV volume lower on the soundbar and still hear what we’re watching. I refer to it as “sports bar mode.”

I was already familiar with the Control4 app, having used it for my lighting control system and back-up TV remote, but now it also controls my multi-room audio system when it’s inconvenient to walk up to a touch panel on the wall.

The learning curve for controlling rooms within the audio system is still a work in progress after having used another control system for so long, but we’re adjusting and enjoying it. It’s been great having the power to add various music services without contacting Millennium to do it for me.

For the first time, we’re not only able to access Pandora and Napster, but also our Amazon Music account, SiriusXM, TuneIn, iHeartRadio, and also a cool app called ShareBridge that enables me to cast any audio stream (say, a YouTube clip)from my phone to the multi-room music system. We can also change the screensaver for the panels (chose a digital clock that dims down when not in use), but I’d like to switch to a family portrait the next time Andy Bang comes by for a service call. On that same visit, I will also have Andy add my new motorized window shade from PowerShades into the system. Not that it’s necessary, but just because it can be done, and I’m no longer a reluctant smart home customer.