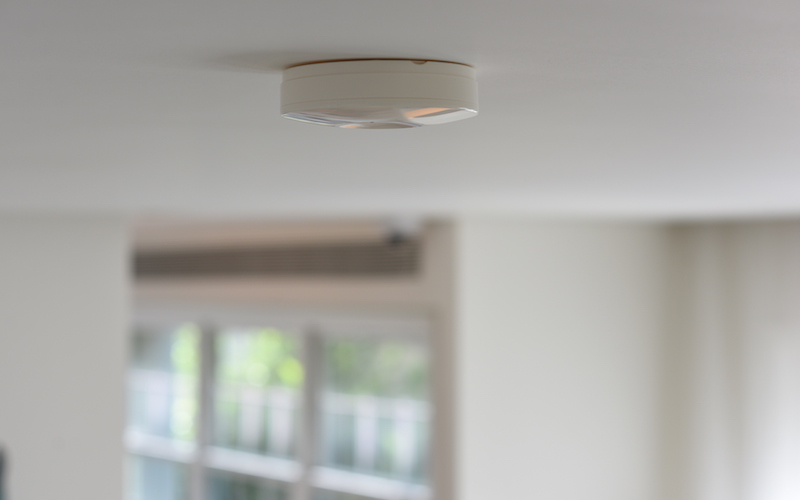 The challenge of developing a true smart home has always been for the systems in the home to anticipate the needs of the occupants. Actions in a smart home have typically been triggered by time and motion.  Unfortunately, time-based actions are inflexible and motion sensors can only go so far because they aren’t capable of identifying individual people in the home. After a successful Indiegogo campaign and almost two years of development, Intellithings has taken a significant step forward in this area with the release of their RoomMe Personal Location Sensor.

RoomMe sensors are mounted on the ceiling, at the entrances to each room in a home, where smart devices are located. Typically this would include bedrooms, the living room, the kitchen, an office, and other primary living spaces. RoomMe will then monitor the movements of people within the home.  Scenes can then be programmed, through the RoomMe app, to be triggered when individuals enter and exit the rooms where RoomMe sensors have been installed. These scenes can include personalized changes to lighting, temperature, and music.

Obviously, conflicts can occur when multiple people are in a room. RoomMe handles this through a priority scheme. There are three tiers of priority:

If a child enters an empty room then the lighting, music, and temperature can be set based on their preferences. If additional children enter the room the settings of the first child that entered will be maintained. However, if an adult, who has a higher priority, enters the room then the settings will change to the preferences of the adult. Similarly, if additional adults enter a room, then the settings of the first adult that entered the room will be maintained.

The exception to the above rules are that if the person designated as the “room master” enters a room their settings will take priority over anyone else in the room; even if they are a child and there are adults in the room. This is useful for giving a child’s preferences priority in their own bedroom or in a designated play area.

This system is well thought, out but not perfect. For example, if children are playing in the living room and a parent walks into the room, just to see if they would like a snack, then the music the children were listening to will be shut off and the parent’s music will start playing. This will occur even if the parent had no intention of interrupting the children’s activities.

RoomMe does all this by detecting the presence, not of the actual person, but the person’s smart phone using Bluetooth. This means that for RoomMe to operate the occupants of a home need to always carry their smart phones. According to Oren Kotlicki, founder and CEO of Intellithings, 90-percent of the people between the ages of 24 and 45 have a smart phone with them 22 hours a day. However, it is important for someone considering installing RoomMe to understand that they will need to keep their smart phones with them for the system to operate.

The RoomMe sensors easily mount to the ceilings of a home with a small bracket. While physical installation is simple, RoomMe requires careful planning to determine the optimal locations for sensors in a home. Intellithings created a video to help people with this process. Up to 32 RoomMe sensors can be installed in a home. Under ideal circumstances this would translate to RoomMe being able to monitor people’s locations in 32 different rooms. However, large rooms with multiple entrances/exits will probably require a RoomMe to be installed at each doorway. So, the practical limit to the number of rooms that can be monitored by RoomMe, in a home, will typically be smaller than 32.

It should also be noted that RoomMe sensors must be mounted horizontal to the floor to operate properly. If a sensor needs to be mounted to a vaulted ceiling, a wedge shaped bracket will need to be fabricated.

RoomMe includes a wealth of integration possibilities. Even though this is the first release of RoomMe Intellithings has integrated with:

In addition, Intellithings has released a public API so additional integrations can be created. I have developed modules to integrate RoomMe with a Crestron automation processor that are available to readers on my GitHub here.

The RoomMe app provides the ability to create “magic charms” that will execute when person enters, or exits, a specific room. The charm defines a personalized scene including lighting, temperature, and music settings.

However, when RoomMe is integrated with a smart home processor/hub much more sophisticated actions can be programmed. For example:

Intellithings provided me with a RoomMe starter kit for writing this article and to facilitate development of a RoomMe Crestron module based on their API.  I found that the product worked well.  I was able to easily integrate the 2 sensors with a pair of Sonos speakers and come very close to the magic of having music follow me from room to room.

Most of the magic is accomplished by RoomMe app on your smart phone (in my case I tested it on my iPhone).  A negative is that not only does the app have to be installed on your phone but it must be running in memory with background app refresh turned on.  If you were to swipe up on the app, removing it from memory and stopping its execution, the system would stop working.

As I stated earlier, careful planning is required when deciding where to install the RoomMe sensors.  They can only be mounted on the ceiling facing straight downward and adequate spacing is very important.  Once installed, there is a calibration process for each cell phone that will be tracked by the RoomMe sensors.  First, the person needs to hold their cell phone directly beneath a sensor.  Next the person is directed to stand at the doorway to the next room so RoomMe can understand the limits of that sensor’s coverage.  Each person must repeat this process for each RoomMe sensor in the home.

Notifications can be enabled in the RoomMe app to provide feedback on what the RoomMe system is “seeing”.  It was interesting to see that as you walk from one room to the next the RoomMe system is very quick to see a person enter a new room.  However, there was a noticeable delay in the system reporting that the person had exited the previous room.  This translated to music very quickly turning on to the users defined preference in the new room but a noticeable delay before it was turned off in the previous room.

The “charms” that are created using the app to make user adjustments to music/lights/temperature, when a person enters, or exits, a room, are simple to create.  I had no problem creating charms to select specific music to play on the Sonos speaker in a room when I entered and to have the Sonos speaker stop playing when I exited.  It should be noted that the system doesn’t allow you to start music playing in a room using the Sonos app and then have that music selection automatically follow you when you move to another room.  RoomMe can’t read what was playing in one room and then duplicate that selection in another room.  However, this will be changing in the future as Intellithings has developed a new way of interfacing with Sonos speakers to create a more seamless experience.

There were several times in my testing that the RoomMe app became unstable and needed to be restarted.  Given how new, and unique, this product is, that is somewhat understandable.  Intellithings is continually working on bug fixes and plans on making further enhancements to the system over time.

Finally, it should also be noted that I noticed faster battery drain on my iPhone when testing RoomMe.  Given the intensity of testing I was doing, especially when working to debug the Crestron module I was writing, it was difficult to quantify the exact increase in battery drain that a casual user would experience.  But, it makes sense that there would be some additional drain given all the Bluetooth communications work that the RoomMe app has to perform as it connects/disconnects from the various RoomMe sensors.  However, when my phone was sitting idle on my desk and not communicating with the RoomMe sensors, I didn’t notice any increase in battery drain even though the RoomMe app was running in the background.

A starter kit, consisting of two RoomMe sensors is available for $129 from RoomMe’s online store.  Three packs and four packs are also available.  A three bedroom home with a living room and kitchen could easily require:

So, a simple three bedroom home could require eight RoomMe sensors at a cost of $478 with the included free shipping.  So, while individual RoomMe sensors aren’t very expensive, the cost to provide sensor coverage of an average home can quickly add up.

Even in its initial release, RoomMe is an excellent product.  However, there are ways I believe the product could be further improved.

In my article “How to Use AI to Control Your Smart Home” I discussed the importance of sensors in the next generation of smart homes.  RoomMe is an important step forward in that direction.  For a smart home to truly be able to take actions based on the needs of the homeowners, it needs to, at a minimum, understand where they are in a home.  Unfortunately, there is currently no way for the smart home to understand the intent of a homeowner when they enter a room.  So, when someone enters the home’s kitchen there is no way for the smart home system to know whether this is to begin cooking a meal or just to grab a quick snack.  The homeowner might not even need the light in the kitchen turned on if all they are going to do is open the refrigerator to grab a piece of fruit.  In the future, machine learning may help a smart home to better understand people’s intent and to fully take actions that anticipate people’s needs.  Today, RoomMe takes us a step closer to that goal.