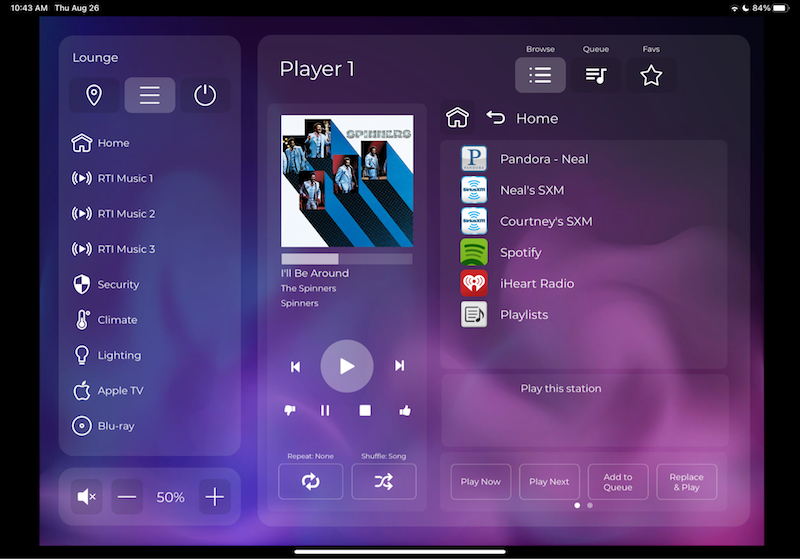 RTI is launching its new RTI Music product as an all-in-one experience for streaming up to three sources at once from a single MS-3 Music Streamer.

“What’s great about RTI Music is that it provides native RTI control on a single app for streaming music,” explained Neal Ellsworth, director of product management for RTI. “There’s no need to go to your Pandora or Spotify app and then use Spotify Connect or anything like that. You no longer need to use Favorites within the control system to get to streaming sources. Now, with RTI Music, it’s all native, built-in, with full functionality.

For the residential market, RTI Music is launching with the following streaming services: Pandora, Spotify, Sirius XM, iHeartRadio. For the commercial market, the company is offering Sound Machine and Sirius XM. More services, including Amazon Music, Deezer, and Tidal, are expected to be added by the end of the year.

Edit Playlists on the Fly

The system is designed so that the end-user can create and edit playlists and queues across the platform on the fly. If, for instance, you have Spotify as well as saved local music files, you can put them all music into a single playlist and RTI will play them both.

You can search through the streaming services from the RTI Music user interface with the integrated keyboard. You don’t have to go to the app itself. And then also your local music directly from the interface, as well. The system allows you to search from any touch panel, iPad, or iPhone or Android, as well.

Airplay is available on all three outputs, which allows end users to play Apple Music or Amazon Music, until those services are available natively. This also enables local music on a NAS or PAC, including lossless audio, to be played through the system.

By stacking two MS-3, you can create up to six streams, which can be synchronized or played separately at one time. The system supports multiple users for each streaming service (a maximum of 26.)

The Configuration Utility for RTI Music launches directly from Integration Designer. It manages streaming accounts and allows an integrator to customize the hierarchy of menus and setup NAS and PC connections. Remote access is available for configuration, updates, and changes from the integrator.

The driver can control up to eight MS-3s per system. It features auto-discovery and enhanced auto-programming, which cuts the programming time in half. It also includes an interactive keyboard, which used to require custom programming to add.