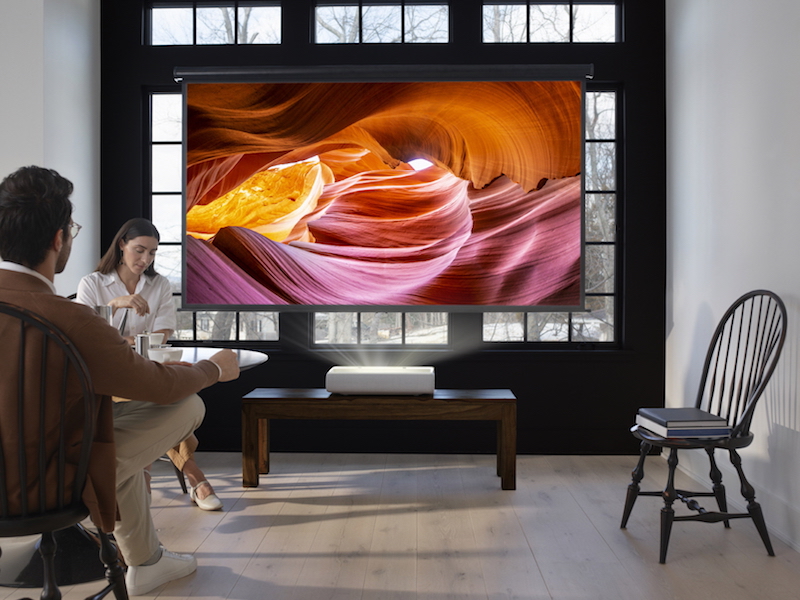 While most of the attention for big-screen TV has focused on large size (75 inches or larger) OLED and QLED sets on one hand and traditional front screen projectors on the other, the past few years have seen more attention given to “Ultra Short Throw” projectors, commonly called “UST.” Through the use of specialized optical paths and mirrors, this concept fits a high-quality projector into a compact cabinet that may either be a standalone unit that is placed on a low table or in a slim cabinet that can be placed right up against a wall.

The result is the ability to fill large-sized screens without the need to hang a projector from the ceiling or have an image interrupted by someone walking in front of the projector. This design concept has found a great deal of acceptance for smaller living spaces or rental apartments where ceiling-mounted products are not allowed.

Many of the major video brands have capitalized on this product category, including Sony, LG, Optoma, Hisense, BenQ, Epson, and others. However, one major brand without a UST offering has been Samsung, where their large screen size offerings have been focused, albeit at high prices, on the microLED-based The Wall products.

Today, that is changing, with Samsung using a virtual press event at IFA called, “Life Unstoppable” to unveil their new “The Premiere” UST projectors.

For those not familiar with IFA, it has always been a massive trade and consumer trade show held each year in Berlin toward the end of Summer. Like virtually every industry trade show event, from NAB to InfoComm, Display Week to the SMPTE Technical Conference, from CEDIA Expo to International CES, “virtual” is the word of the day. IFA took a slightly different route, with a very limited “in-person” series of product showings and press events, and this is evidence of that new approach to product introductions.

Samsung may be a bit late to the UST game, but with The Premiere line they are entering with very competitive products. Two models were previewed for in-market availability in the U.S., Europe, and Korea later this year. Both the LSP7T and LSP9T offer full 4K resolution powered by a triple laser-illuminated light engine with the quoted peak brightness is up to 2,800 lumens. The screen sizes are 120 inches and 130 inches, respectively.

While Samsung may be late in the roster of UST suppliers, they are at the head of the pack for projectors that include some key features. Both Premiere models are the first projectors with both HDR-10+ certification and the Filmmaker Mode. Given that movies are likely to be a prime program source for large-screen projectors, Filmmaker Mode disables certain video enhancements that while people find desirable, but which directors and cinematographers have complained prevent their content from being seen as its creators intended.

While smart TV functionality is almost a requirement for direct view screens, most projectors are a bit behind the curve in that area. The Premiere raised the bar with the inclusion of a full set of connected apps and streaming functionality that is seldom seen in projectors.

Based on the same Tizen Smart TV interface found in current Samsung QLED models, the Premiere offerings will include Apple TV, Samsung TV Plus, Samsung Health, and many of the traditional streaming apps that one would expect today. Given that, particularly in small-room environments, there may not be the space or desire for a large audio system, The Premiere is equipped with Samsung’s Acoustic Beam surround sound, complementing built-in subwoofers.

With availability planned for later this year, some details such as pricing, the availability of HDMI 2.1 inputs, and HLG are still to be announced. However, for anyone doubting the market appeal and value of the UST projector configuration, Samsung’s entry into that market segment gives even more validation to the product proposition. It will be very interesting to see if the feature set of products from this CE heavyweight is reflected in new UST models from the other category players.