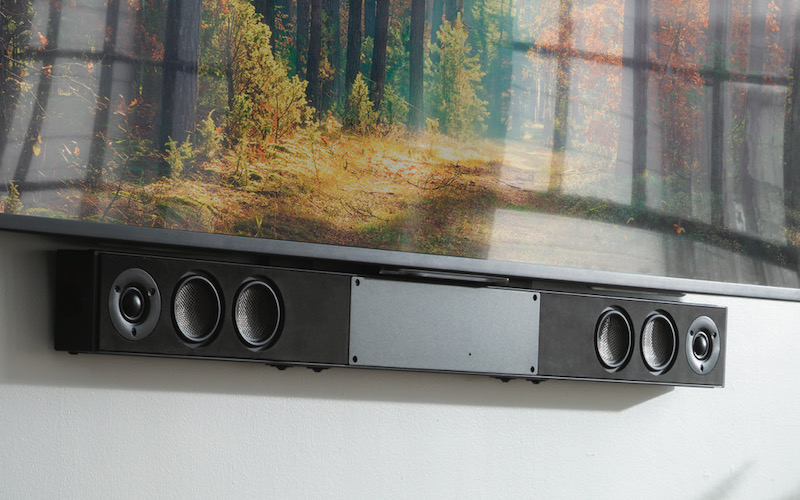 Savant didn’t start out as an audio company. When it was founded in 2005, the Massachusetts-based company was known more for its home automation and device control acumen, only more recently broadening into such areas as solar power management and audio and video distribution.

Savant’s acquisition in 2017 of respected loudspeaker manufacturer, Artison, and partnerships with established technology platforms such as AVB and WiSA are further solidifying the company’s audio technology position, leading to its latest new product launch, a three-channel “surround soundbar” that will decode Dolby and DTS (via Toslink cable) and connect a subwoofer and rear-surround speakers using the WiSa wireless audio protocol (although the sub can be wired up as an alternate option).

“We chose WiSA because it’s high-bandwidth, point to point, high bit rate, so you can run it at 96K/24-bit,” said Savant’s VP of Engineering, Tim Locascio. “It provides great audio quality, point-to-point, for surrounds, and is made exactly for this application. We spent a good year testing WiSA and they recently fixed issues we were running into. The technology has solidified in the use case we’re using it for.” We’re planning on shipping in Q4.

The idea of embedding more technology in core devices has been a trend for a while now at Savant. Around this time last year, the company announced embedded control and host processing technology into core devices, making system design and installation easier than ever before as well as allowing integrators to add the foundation for whole-home control into a wide variety of new project types. The first was the result of the Savant Host Inside initiative with the Savant IP Audio Soundbar and Savant Multistat thermostat.

The Savant IP Soundbar is an AVB networked device fully compatible with Savant IP Audio, delivering access to all popular streaming services and requiring no outboard rack-mountable hardware for audio distribution. It features built-in control ports as well as all of the smart capabilities of Savant’s S2 Host, including a single stream of Savant Music. The all-in-one solution for audio and control is included, making it perfect for single-room solutions or for systems with up to six zones of audio and control. With this new smart soundbar, dealers no longer have to wire and locate a separate host and controller to provide the user experience and voice control capabilities consumers can receive from the Savant Pro Remote.