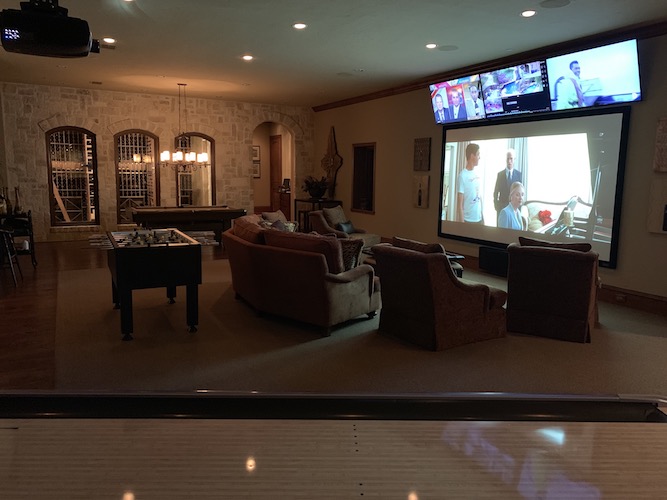 The AV over IP transition has accelerated in commercial facilities over the past 12-18 months, particularly as IT departments grow increasingly comfortable with managing audio and video traffic on the business network.

Those concerns have never existed in single-family residential homes, where homeowners are quickly catching onto the value that IP networking brings to home entertainment: fewer wires, lighter infrastructure, and a simpler way to feed and control content.

These same benefits are shared on the installation side. Firms such as Texas Custom AV and Security are increasingly moving away from circuit-based systems that lock both installers and end users into fixed I/O counts and less flexible architectures that are a challenge to scale.

“We have seen very strong business in the custom home residential business, particularly at 5,000 square feet and up,” said Jonathan Jolley, general manager of Texas Custom AV and Security, with offices in Houston and Dallas. “In many cases, we are hearing from customers with older systems that may have been installed 10 years ago. These are often component video systems that have reached the point of no longer being serviceable. With technology at a two-to-three-year turnover point, AV over IP makes sense as a new direction.”

The Farrington family, owners of a 12,000-square-foot luxury home in the Dallas area, represent an ideal example of why AV over IP adoption is taking off in residential AV. Gage Custom Homes built the home for the family 10 years ago, and brought in Jolley’s previous employer to architect the home entertainment system. 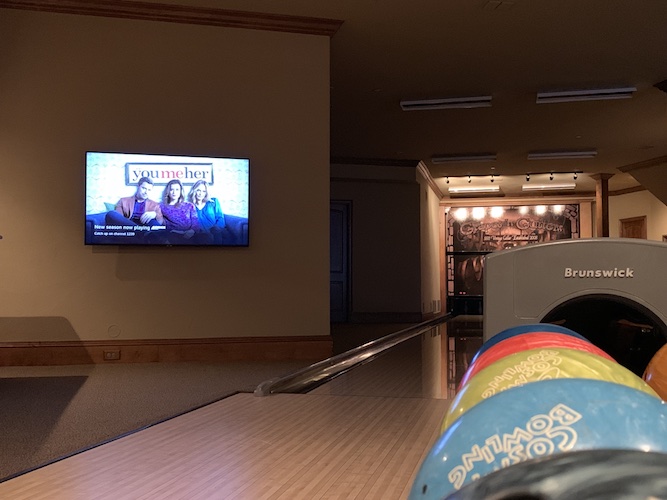 The original design was a classic component video system, feeding live TV, DVD/Blu-ray video, and 5.1 and stereo audio throughout the home. This includes a 5,000-foot basement area with a two-lane bowling alley. While the system performed well for many years, there were end-of-life signals on the horizon.

The system comprised a B&K video switcher with legacy AMX touch panel control, and a separate system to switch the audio. The switching systems were no longer serviced, and new control system methods have become available in recent years. The wiring was all Cat-5, which in itself presented limitations on both the integration and user experience side.

“We initially tried to find a matrix solution that would work over the existing Cat-5, and feed the various displays around the house,” Jolley said. “There were two problems: First, the video signal quality suffered from the compression of component video; and second, a retro Cat upgrade would be required, including new runs on one side of the house. I couldn’t imagine doing that kind of damage to the structure.”

Moving to an AV over IP architecture would ultimately solve both these problems, while enabling new AV and entertainment opportunities within the home.

Take it to the Network

Jolley and his colleagues started to evaluate AV over IP options on the market. A discussion with their friends at The Momentum Group, a regional AV dealer, quickly turned their focus to Atlona’s OmniStream R-Type platform. R-Type is the residential line of Atlona’s flagship OmniStream Pro AV over IP family for commercial AV, offering a lighter feature mix that brings the same benefits to routing AV signals over the network. The Farrington residence system includes four OmniStream 512 (AT-OMNI-512) dual-channel encoders and 16 OmniStream 521 (AT-OMNI-521) single-channel decoders. 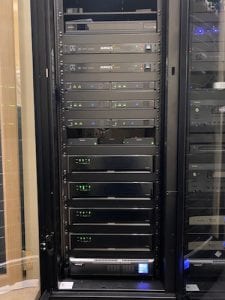 “We have seven video sources and 14 displays, so this gave us a solution to efficiently manage that disparity of numbers source and destination,” Jolley said. “We could have gone with a 16×16 matrix switcher, but at the end of the day we wanted something more up to date. Adding another source and another display to R-Type is simple, and there is so much more flexibility for remote management.”

The remote management capabilities are delivered through the Atlona Management System (AMS), a toolset built specifically for installers. “I can log in offsite and pinpoint any control issues, manage system configurations, make adjustments if there are sync issues, and even reboot the entire system if necessary,” Jolley said. “This gives me something that is both up to date and easily accessible.”

The picture quality has also dramatically improved, particularly in the basement where signal compression was most obvious before. The basement includes three Samsung NU7100 55-inch 4K UHD TVs and a Barco Loki Projector, the latter of which was tested with the old system but installed along with OmniStream R-Type. Excellent picture quality is also enjoyed on the other new Samsung 4K UHD displays (ranging from 49 to 75 inches) found in the kitchen, master bedroom and bathroom, family room, patio, studio and exercise area.

“The artifacts in the video were obvious with the old system, and the jitter coming out of the projector was distracting at best,” he said. “The signal is now very fluid with OmniStream, and we can get 4K content everywhere in the home.”

In with the New

Rather than simply swap old rack units for new, the Texas Custom AV and Security team took the upgrade deep into the core of the infrastructure. The old central equipment rack was removed in favor of a 42-inch SnapAV enclosure with a glass front. The rack design delivers a sleek appearance ideal for residential environments, while maintaining the serviceability element for installation team.

“I prefer the deeper rack enclosures that simplify wiring and general system maintenance,” Jolley said. “The SnapAV system includes lacing bars that are easy to manage, and overall there is plenty of space inside to move around and manage the system.”

The rack enclosure houses a DirecTV Genie system (three set-tops with built-in DVRs), two Apple TV 4K players, a Sony UBPX1000ES Blu-ray player, and a SnapAV Luma Surveillance 501 Series NVR to record security feeds from seven Luma 700 series IP cameras. All video and audio are now controlled over IP through a Savant SmartControl 12 platform; that infrastructure includes a Savant IP Audio 125 to power audio distribution and amplification through the home. An AVB switch was added for efficient audio zone management over the network; a Luxul managed switch acts as the main IT traffic cop, with Ruckus R510 and R610 access points to support WiFi.

Key Digital KD-Pro HDMI cables were used to manage all I/O connections between the devices, including R-Type units.

“We have all four R-Type dual-channel encoders in the rack, along with two single-channel decoders that feed rooms with surround sound,” Jolley said. “The remaining decoders are installed by displays in various rooms around the house. I can send video and audio straight to the decoder over the network, which really limits technical issues.”

The scalability aspect is another benefit. With seven sources managed across four dual-channel encoders, that leaves room to add an eighth without any new hardware; additionally, encoders and decoders can quickly be added to the network to support any new sources and destinations. The OmniStream R-Type devices are also controllable through Savant, with seamless interoperability to support Atlona’s fast switching and low-latency delivery.

Jolley notes that the Savant system shares many of the same traits and benefits that the Atlona systems provide, particularly on the audio side. The Savant system is configured for one-button functionality; for example, the ability to turn on all basements TVs and the projector at once.

“The Savant system gives the Farringtons the option and backbone to use an iPad or iPhone as a remote, and it gives me that same offsite serviceability that I’m getting with Atlona,” Jolley said. “The cloud management feature allows me to log in from anywhere and monitor how everything is working, and the Farringtons can control audio levels and turn displays on and off for guests from the other side of the house. I really wanted a system that wasn’t over-automated, and instead gave them the freedom of flexible control.”

The Savant system goes deeper into the home infrastructure, with the ability to read and manage 11 thermostats for whole-home HVAC control, as well as a Savant Door Station. iPort Surface Mount Pro panels built into iPort Luxe Base Stations replaced existing legacy AMX touchpanels for local control of all systems; two roaming iPads are also used for control on the move, with one in the basement and one for the remainder of the home.

The project also extends to the outdoors, with a 70-volt SnapAV system with 12 Episode Landscape Series satellite speakers and two 8-ohm Landscape Series Burial subwoofers bring audio entertainment through the backyard and pool area. Crown Audio CDi 1000 amplifiers power outdoor audio entertainment over two separate channels. “The audio is spread out enough where you can keep it at a comfortable level, but still hear the music without the audio dropping,” Jolley said.

Jolley, however, is most proud of the transformation taking shape inside the home.

“The challenge today is that the customer does not want us cutting holes into walls, and then spackling and repainting to hide the damage,” Jolley said. “They want us to come into the job and complete our work with minimal disruption, and leave behind a high-quality, whole-home entertainment system. The ability to do all of this on existing wiring with products like OmniStream and Savant that also futureproofs the entire system is a win for everyone.”