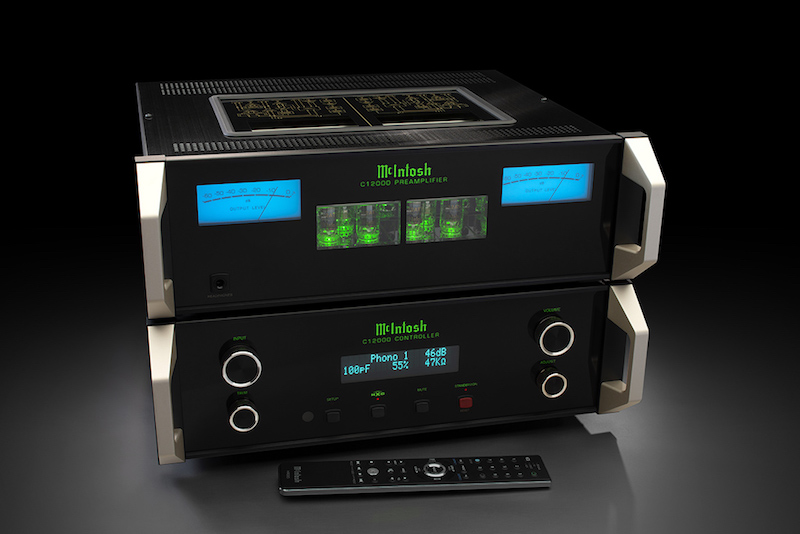 With its C12000, McIntosh offers another two-chassis preamplifier that isolates the audio section from the control and power sections, resulting in what the company says is the purest sound reproduction possible.

The C12000 is comprised of the C12000 Controller Module and the C12000 Preamplifier Module, which are designed to work together seamlessly when connected. All power control, data ports, and external control connections are located within the C12000 Controller, where dual isolated power supplies drive the left and right channels, while a dual microprocessor gives robustness to the control system.

The C12000 Preamplifier Module houses the audio connections and circuitry – inside, the left and right channels are electrically and mechanically isolated to allow true dual-mono operation, resulting in the improved stereo separation and sonic purity.

The controller and preamplifier units are connected via high performance umbilical cables that are specifically designed to prevent outside noise from leaking into the audio signal.

Programmable phono inputs on the unit provide adjustable capacitance and resistance loading for greater compatibility with a variety of turntables. Also, the phono stage utilizes four 12AX7A vacuum tubes, with two tubes per channel in a fully balanced configuration that incorporates RIAA equalization.

There are more user-adjustment options in the C12000, reflecting a new level of user customization in McIntosh preamp design. Also, there is a high-output, high-drive headphone jack with user-selectable Headphone Crossfeed Director (HXD).

The C12000 can be paired with a variety of amplifiers, speakers, room correction devices, CD players, turntables, tuners, and other source components to complete a home audio system. It can be integrated within existing multi-channel home theater system via the Home Theater Pass Through feature. The C12000 employs fully balanced circuitry to match the level of performance achieved in any of McIntosh’s Quad Balanced amplifiers.

The C12000 is a visual statement in addition to its audio prowess, complete with McIntosh’s classic features, including black glass front panels, iconic blue meters, and custom machined-brushed aluminum handles. Both units feature a chassis made of stainless steel, polished to a mirror finish, plus hairline brushed black titanium stainless steel, offering an enhanced degree of richness and refinement.

Orders for the C12000 can now be placed with Authorized McIntosh Dealers with shipping expected to begin in December 2021 to the United States and Canada, and to the rest of the world shortly thereafter. Suggested retail price (VAT, shipping and any customs duties related to current standards of individual countries are excluded): $8,000 per module, totaling $16,000 for the complete preamplifier.