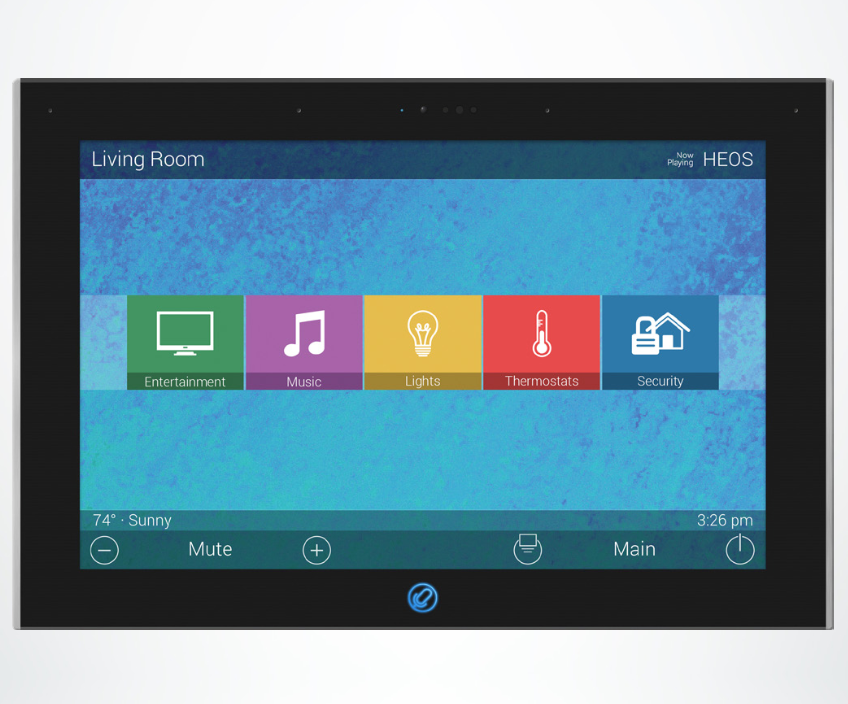 Unlike its predecessor, the TKP-8600 clearly indicates if its microphone is activated. It also allows the consumer to choose whether to initiate voice commands via push-to-talk or through a wake word.

“The screen’s background can be programmed to be white if push-to-talk is enabled, blue when the wake word setting is chosen, or red if voice control is disabled,” noted URC VP of Product Development Lars Granoe. 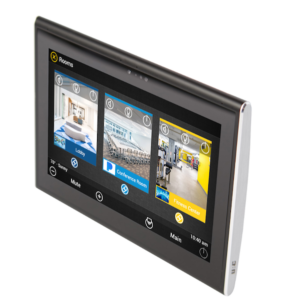 The TKP-8600 features an 8-inch high-resolution LCD screen, which sized an inch larger from the previous model but under the company’s largest 10-inch offering.

“On the commercial side, clients tend to like a little bit larger keypad, but 10 inches is sometimes too big,” Granoe said. “Some people wanted bigger keypad sizes for our scheduler that goes outside a banquet room or conference room.”

The new touch screen features Live Camera View with integrated MJPEG and/or H264 camera streams. With privacy as a big focus, URC designed the TKP-8600 to notify users if the camera’s being used or if the room is being monitored. In those situations, a blue light comes on notifying those in the room that the camera is on.

The new touch screen works in either landscape or portrait mode and also features night mode, where the screen can go dark or to a screen that shows upcoming weather, sunrise, sunset, etc. A built-in light sensor automatically adjusts to the room’s lighting and a proximity sensor wakes the device up as you approach.

With the Alexa capability, any of the URC’s systems commands or macros can be triggered by voice. “For instance, with a ‘Good Night’ macro, which closes shades, turns off lights, checks door locks, and triggers pathway lighting, can be engaged by simply saying the words, ‘Alexa, it’s time to say good night.’ You don’t have to voice each of those commands separately,” Granoe said.

Approvals are underway for other voice control technologies to be announced later in the year.