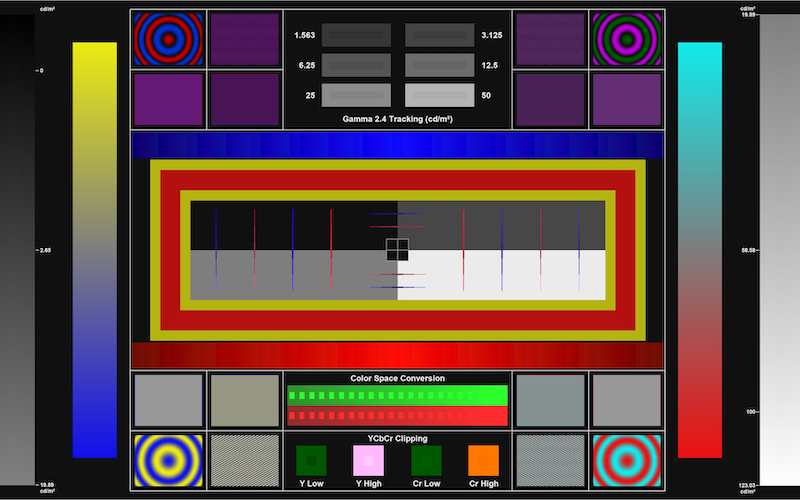 Video calibration discs were so prevalent in the DVD and Blu-ray era that any self-respecting videophile probably had at least three in his or her disc collection. For a minor investment, you could dial in your display’s brightness, contrast, color, tint, and sharpness settings to a respectable degree without having to drop $500 on a professional calibration.

In the UHD era, though? To call such discs a rarity would be an understatement. Samsung released an HDR10 Reference disc back in 2016, but it would only play in the company’s own UBD-K8500 UHD Blu-ray player and didn’t support Dolby Vision, which of course limited its usefulness as time went on. Diversified Video Solutions also offers a couple of discs in addition to its various digital file packages, but a disc with both HDR10 and Dolby Vision patterns is pricey enough to keep it out of the hands of all but the most dedicated video enthusiasts.

In addition to filling a void in the marketplace by providing an affordable video reference and calibration disc that works for every different incarnation of HDR, and on practically any UHD Blu-ray disc player, the new Spears & Munsil UHD HDR Benchmark also shines a light on why creating such a product was so difficult in this new era of home video.

The first thing you’re met with when you fire up the disc is a configuration screen that allows you to select the luminance of the test patterns that follow. That’s important because different displays – and indeed different display technologies – aren’t consistent these days in their luminance capabilities. A newer LCD display may be capable of cranking out 2,000 nits or more, where even the best of OLEDs struggle to deliver more than 500 nits peak brightness.

You’re also given a choice between Dolby and DTS audio codecs, but that choice only affects one of the disc’s numerous tests: AV Sync. Also known as lip sync, this portion of the disc allows you to dial in the delay of your audio, assuming that you’re using an AV preamp or receiver, to ensure that picture and sound are as perfectly synchronized as possible. I’ve run through numerous such tests on innumerable discs, and Spears & Munsil’s is still the best and least ambiguous.

Frankly, though, the rest of the disc is nowhere near as intuitive. If you want a firm understanding of what each test pattern does and how to use it, you won’t find any assistance on the disc itself, nor in the one-sheet reference insert included with the disc. You’ll have to turn instead to the numerous articles published on the spearsandmunsil.com website, which do a thorough job of breaking down each pattern, and not merely telling you what you should or shouldn’t see, but instead detailing a number of variations you might observe onscreen, and what each observation means.

Perhaps no section of the disc is more confounding – or more useful – than the Color Space Evaluation, which allows you to assess your display’s chroma upsampling and chroma alignment, as well as the output capabilities of your player and/or video processor. It was via this test – along with all of the suggested fixes recommended by Spears & Munsil – that I discovered my TV has some issues related to color space conversion, which results in some minor banding that I have, in my ignorance, blamed on Netflix in the past.

For someone who reviews both hardware and software, that kind of knowledge is indispensable, and it’s the sort of thing I simply couldn’t evaluate before without relying on thousands of dollars’ worth of test equipment. Mind you, it’s not a severe enough issue to cause me to ditch my current display for an upgraded model, because another thing you come out of the Spears & Munsil UHD HDR Benchmark disc with is an understanding that HDR-capable consumer displays are all – in some way, shape, or form – compromised at the moment, and none of them really lives up to the capabilities of video formats like Dolby Vision.

One other thing worth mentioning is that the Spears & Munsil UHD HDR Benchmark may simply not be necessary for most home entertainment enthusiasts, for a couple of reasons. Firstly, as the articles on the company’s website point out, you really shouldn’t be adjusting settings like brightness, contrast, color, tint, etc., with your TV in HDR mode, since it affects your display’s ability to tonemap incoming video signals. Secondly, most decent HDR-capable TVs come out of the box pretty close to calibrated in at least one of their numerous picture modes.

Still, it’s an undeniably valuable resource if you want to find and understand your display’s breaking points, and it’s doubly valuable for installers who want to better understand the capabilities of the TVs that they sell, and which ones may work better for different applications.

The disc also includes test patterns in standard dynamic range, as well as a wealth of incredible demo videos in your choice of Dolby Vision (both FEL and MEL versions), HDR10+ (assuming your display and player support it), standard HDR10 (with several different options for peak brightness and color space), Hybrid Log Gamma, and even SDR. The best of the bunch, though, is a split screen that shows HDR10 on the left and SDR on the right, as it’s the most effective demonstration of the benefits of HDR that I’ve seen to date.

In the end, the Spears & Munsil UHD HDR Benchmark disc is both an infinitely more complicated tool than its predecessors, as well as arguably a less necessary one for the average home video enthusiast. And after I had run through all of its various tests and tools, I didn’t make a single change to my TV’s settings.

But, I understand my TV now in a way that I didn’t before, and for me that understanding is absolutely invaluable.