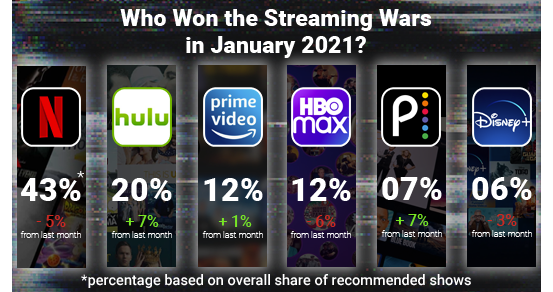 Users of the TV recommendation app Watchworthy say that, in January 2021, the battle between top streaming services had Hulu and Amazon gaining ground on Netflix, HBO Max, Disney+ in, and Peacock joining the fray for the first time.

Top lists for 2021 were created using data from Watchworthy, a free app that offers personalized TV recommendations and allows users to build their own watchlist from TV networks and more than 200 streaming services, such as Netflix, HBO Max, Disney+, Hulu, Amazon Prime, and Apple TV+. In just 30 seconds, Watchworthy gets to know users’ specific tastes in TV and recommends new shows they’re statistically more likely to love.

Watchworthy uses algorithms from a unique panel of one million high-intent TV fans voting on more than 13,000 TV shows on Ranker.

By relying on the Watchworthy algorithm, which itself relies on the “Likes” and “Dislikes” of Ranker and Watchworthy users, “Worthy” scores give a sense of not just what’s popular, but what’s trending in TV today. The data from aggregated Worthy scores, therefore, tell which shows are most rapidly growing their fanbase for the first month of 2021, as well as the platforms where those shows are available to stream.

“Since launching Watchworthy in March of 2020, the data has been pouring in as streamers are taking full advantage of the app’s social features by creating and sharing their ‘Watchlists’ and ‘Worthy’ scores to collaborate with friends and family,” said Clark Benson, CEO and founder at Ranker. “Which begs the obvious question, how do we get a sense of who’s winning the streaming wars? We can answer that question by taking a look at the way people are using Watchworthy and interpret those results as a reflection on the constantly changing habits of TV viewers everywhere.”

Here’s what the data showed:

Over the month of January 2021, Watchworthy tracked each time a show received a Worthy score of 80 percent or higher, then organized all those shows according to Networks. The resulting analysis allowed Watchworthy to determine which network’s content is being recommended to the most users.

Netflix has been able to limit any January losses to competition with strong Watchworthy recommendations for shows like The Umbrella Academy and Sex Education, suggesting that these already popular titles are steadily growing their audiences.

After falling behind HBO Max in December, Hulu regained its second place status behind number-one Netflix. However, Hulu’s biggest winners aren’t original shows, but acquisitions like Family Guy and The Good Doctor, which were among the most frequently recommended shows on Hulu in January.

Still largely relying on the strength of The Boys, the service got some help from Jack Ryan, which saw a resurgence in recommendations in January, as well as one of Jeff Bezos’ favorite sci-fi original, The Expanse.

The newcomer HBO Max wasn’t able to keep up December’s major momentum. Part of the drop-off can be explained by Euphoria, which fell from the number-two-most Watchworthy show to number five. But there’s good reason to expect that trend will reverse given that two new one-hour specials of the hit TV series were just recently released, including a cadence of upcoming theatrical releases.

At the start of the year, NBC’s streaming platform acquired The Office, one of Netflix’s most frequently binged properties. That, in addition to Parks and Rec and The Good Place, has been enough to put Peacock on the board, even surpassing Disney+ in January.

Despite having the most Watchworthy series of the month, Disney+ is in sixth place. High-scoring “Worthy” shows like The Mandalorian and The Simpsons have kept them on the board. It’s also possible that the highly anticipated WandaVision will strengthen their position in the coming months.

Below is a list of the Top 20 TV shows and streaming platforms given the highest Worthy scores to Watchworthy users throughout the month of January 2021: