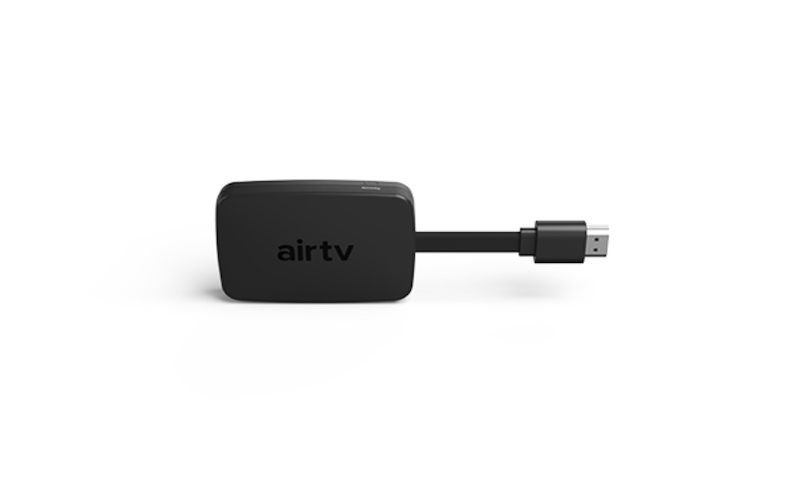 The folks at AirTV beat both the heat and the inventible wave of new streaming device products expected to be unveiled in late summer/early fall from the likes of Roku and Amazon’s Fire TV line, with their new AirTV Mini. It pushes the benchmark a bit higher and debuts a new form factor.

While the current AirTV Player and AirTV, both of which remain available, have a more conventional “set-top” size configuration, the new AirTV Mini is their first foray into the “plug into an HDMI jack dongle” device design popularized by Roku, Chromecast, and Fire TV.

It has a bit boxier size and aesthetic than the long, thin look of its competitors, but is still small and lightweight enough to easily plug in and hang behind the TV. As such, unlike the AirTV Player, it is Wi-Fi only but ups the ante with dual-band 802.11ac (Wi-Fi 5) capability. There is also Bluetooth integration for use with headphones and game controllers.

The remote is similar to the competition. It is black, rather than the blue and white theme of the AirTV Player with direct access buttons for Netflix, Google Assistant using the built-in mic, and, of course, Sling for AirTV’s corporate parent. Thanks to CEC, there is control for TV or audio system on/off and volume along with the requisite navigation buttons. Put it in your hand, and you’ll be instantly familiar with the operation, as it resembles others in the field.

The new AirTV Mini stands out from the crowd in the system design and interface. AirTV Mini is the first stand-alone streaming product with Android TV 9.0. Even the NVidia Shield, often regarded as the best Android TV streamer and the most frequently upgraded, does not yet feature the 9.0 version. These days, HDR 10 is more or less standard for streaming devices, but, according to AirTV, the Mini also joins the ranks of products that pass-through Dolby Vision. Chromecast is onboard, as is 4K capability for compatible source material. The Mini also claims a faster processor and more memory than some of the competition.

With cord cutters as an obvious target for this type of product, some DVR capability is essential. Unlike the AirTV Player and NVidia Shield, which can be connected to an optional ATSC tuner and USB storage, the Mini uses the dual-tuner AirTV box for reception and storage output, which, in turn, plays the live or recorded content back though the Mini via the Sling app. Of course, as with any of the streaming dongles, one can also use third-party devices such as a Tablo for off-air viewing and DVR.

The new AirTV Mini is an interesting addition to the streaming dongle device market. It certainly has the right features and capabilities, and at an MSRP of $79 it is more expensive than some of the Roku, Chromecast and Fire TV models, but it is certainly lower priced than Apple TV 4K or Nvidia Shield. While a Sling subscription is not required, the interface is certainly Sling-centric just as the Fire TV products are Amazon-centric. The selection of apps is broad, but in that respect, it does not have the incredible range of apps that one gets from Roku. Without ties to any specific service provider, Roku is still the “Swiss Army Knife of streaming devices.”

Indeed, to mollify the cost and Sling orientation, the Mini debuts with a limited-time offer of a free AirTV and indoor OTA antenna with the prepayment of the first three months of a subscription to Sling. With that, the new AirTV Mini is an interesting addition to the market. It is worth looking at as an Android TV-based 4K/HDR streaming dongle, where even though it is priced the same as the AirTV Player, many may find the dongle form factor and less visible blank remote and device more attractive.

Even as more “smart TVs” offer streaming built-in, set-top boxes and dongles continue to present very attractive streaming alternatives.. This is not only for use with older TVs and video projectors, both of which lack streaming capability, but also for their more frequent system and app updates than built-in Smart TV services. As we move into fall, it will be very interesting to see how this new streaming dongle stacks up against the expected new models from Roku, Google, and Fire TV.