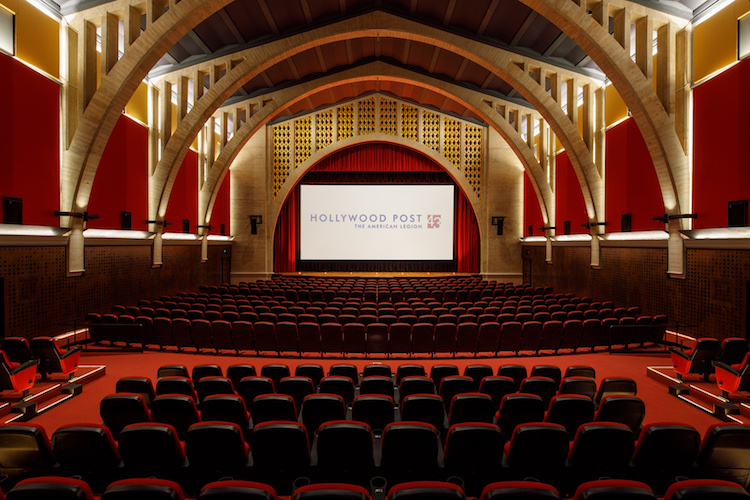 Founded in 1919 by First World War veterans working in the motion picture industry, the American Legion’s Post 43 became a Hollywood icon, with members including Clark Gable, Charlton Heston, Mickey Rooney, Ronald Reagan, and more. In recent years membership of both Post 43 and the Legion in general has declined, but a major project to update the post’s auditorium is putting it back at the center of the Los Angeles community. Alcons Audio auditioned and was chosen for the starring role.

Given its location on Highland Avenue, Hollywood, it’s unsurprising that movies have always played a key role in the life of Post 43. As veteran Bill Steele – Post 43 member and the upgrade’s project manager – says, it has always been “that much more showbiz” than any other American Legion post. Built of reinforced concrete in the Art Deco style, the Post’s memorial clubhouse features a central auditorium where various meetings and events take place as well as, in the past, movies being shown.

Several years ago, Post Commander Fernando Rivero not only saw the opportunity to restore the faded grandeur of the auditorium, but to transform it into a state-of-the-art, 500-seat movie theater, which would re-establish Post 43’s role as an important part of the local community.

“Fernando understood how it was a gem that just needed polishing. It had great potential for it to be a rental facility and a cultural venue, to bring the public in to see this amazing theatre we have,” Steele said. “The plan was to modernize it as a technically-advanced cinema, but to retain the ability to host dances, meetings and live music, and with everything done in the context of its history and that honored its architecture.”

Ambitiously, on the cinema side the desire was also to make it suitable for digital, 70mm, 35mm, and even 16mm film showings.

One of the first things Steele did was to look into an appropriate audio system. “It’s a very demanding audience in Hollywood, because they’ve heard it all,” he said. “Early on we decided not to install Dolby Atmos, because we didn’t want to destroy the architecture of the room. But we really wanted the best possible sound, a high-end system that would go above and beyond all others.

“Before we started, the audio system was a large mono speaker and an old horn PA system, like in a prison yard. It was really antiquated,” Steele added. “But everything that had been part of the movie system had all long been stripped out. The room really was just a shell.”

A major challenge was how to deliver high-quality sound for every perceived use in a large, very reverberant space, where the plan was to highlight the art deco architecture by taking it back to its original concrete. But, unknown at the time to the Post 43 membership, Steele is an audiophile and a long-time fan of the open, transparent sound of ribbon drivers.

His introduction to Alcons Audio was at the annual International Cinema Technology Association (ICTA) seminar in LA, where Alcons’ David Rahn was giving a talk about the company’s pro-ribbon systems.

“I didn’t know that there was a ribbon system for the cinema market and so I was really intrigued how Alcons had overcome the limitations of past designs,” Steele said. “To be honest, I was a little wary because previous systems hadn’t had the power handling, they didn’t have the required ‘oomph’. I wanted to hear a demonstration, so David brought over some Alcons pro-ribbon nearfield monitors and, without any acoustic treatment in the room, they sounded amazing straight out of the box. I brought people from our cinema committee in and they were really impressed.

“The long reverb times in the room have always been a problem, so it needed a system that would minimize unwanted reflections,” he continued. “David’s demo showed that the Alcons pro-ribbon system would really help, because the speakers are so directional. Along with the dynamics, transparency and power handling, frankly it blew everyone away.”

With it needing to also be suitable for live recitals, corporate events, meetings, and more, the chosen audio system needed to deliver high-end PA functionality as well as exceptional movie sound. Using a mono array as a demonstrator, Rahm proved that Alcons checked that box as well. “I set the bar pretty high for what we wanted and Alcons fulfilled all our criteria, with a fair bit in reserve,” Steele said. “We listened to a lot of systems, but Alcons was the only one that gave me no reason at all not to choose it.”

In the meantime, Peter Grueneisen of LA-based nonzero architecture – a company renowned for its high-end acoustic spaces – was brought in to help the restoration of the architecture, at the same time as taming the acoustics.

“We worked with Arup at the start to model the space, which helped us to determine the required treatment,” Grueneisen said. “The first issue was to refine the reverb, but we also had to face the inherent problem of multipurpose spaces – that the acoustic requirements are different for movies and live events. For movies you really want a flat acoustic, but for live events you want that extra ‘liveness’.

“We thought about variable acoustics but, from the Arup model, the results didn’t seem sufficient to justify the cost,” Grueneisen added. “In the end we chose fixed acoustic treatment, which is tilted toward movies but which has enough liveness for concerts and presentations.”

After 90 years of paint had been stripped back to bare concrete, wall panels and ceiling treatment were added, followed by a new baffle wall on stage for the Alcons system, as well as perforated wood panels around the lower walls, bespoke CNC-machined in acoustic patterns depicting different movies.

“An entire year was spent building the infrastructure, to make sure we had the best playing field for the speaker system,” Grueneisen added. “It included completely rebuilding the ancient air conditioning system, installing a new one in the plenum space below the auditorium, and sealing it to ensure there was no resonance from it or the banquet space below that. Everything was done to keep the acoustics as neutral as possible.

“The fact that Alcons pro-ribbon systems are so focused was a huge help. We didn’t have to worry about sound splatter across the entire space, we knew that all the energy would be focused on the audience. It meant that it all fell into place very well. For a space that is so acoustically challenging, there were no major problems.”

Designed to meet the requirements of all current and future (digital) cinema sound formats, the CR4 features three RBN401 pro-ribbon HF driver arrays, quad 6.5-inch midrange and double 15-inch woofers. By implementing line-source technology throughout the system (an industry first), the normal -6dB step reduction of SPL coverage from front to rear is reduced. This “proximity” effect dramatically improves the experience for the audience further away from the screen, while the precise projection pattern also prevents unwanted ceiling reflections.

The HF section has a 2400W peak power input, offering a dynamic range of 1:16 with up to 90 percent less distortion from 1kHz to beyond 20kHz, delivering the kind of audio quality that Steele knew a pro-ribbon system could provide. Alcons Signal Integrity Sensing (SIS) pre-wiring also significantly increases response accuracy, further reducing distortion.

Another industry first is the shallow 13.7-inch (35cm) enclosure, which means only a minimum of space behind the screen is required, while the patented Real-90 horizontal dispersion widens the stereo experience for the audience seated at the far left and right of the auditorium. 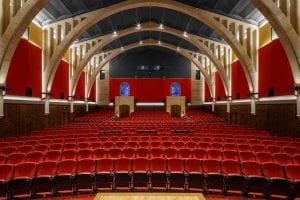 Rear view of the theater

“The Alcons pro-ribbon solution overcomes so many limitations of other cinema systems. There is something very special about being in a movie theater and being hit with high levels of undistorted sound. Very few systems can do that and I’m really excited about it,” Steele said. “It means no ear fatigue for the listener, and we’re also going to have tremendous headroom. The potential is phenomenal.

“In addition, the CR4s give us five channels behind the screen for showing older formats, which most multiplexes won’t spend the money to have. We wanted to reinvent the space as a really high-end movie theater and performance space. Alcons delivers that without question. Frankly the system was impossible to say no to.”

Levi Joos, proprietor of Stay On Screen, was equally excited about the Alcons solution. “When Bill suggested using Alcons, I was very impressed with the pro-ribbon technology, and the awards that it had been winning in Europe,” he says. “From an installation perspective, it was helpful that it didn’t need all the power and wiring down by the stage. The support from Alcons was also very good, which we really appreciated.”

Steele agreed, saying, “Alcons’ customer service was really top notch. It was much more than just a sale to them, they went way above and beyond what was expected, doing a lot of work to make sure everything was exactly right.”

With the first public event at Post 43’s refurbished hall taking place on August 29 – with Los Angeles Mayor Eric Garcetti, in attendance – Steele was very optimistic about the long-term starring role that the Alcons pro-ribbon system will play in putting this once-iconic location back on the map.

“We have made a huge commitment to the community and I’m absolutely confident that, with Alcons, we made the right decision,” he said. “I don’t think I’ve ever heard a cinema sound system that is as undistorted and non-fatiguing. It is very relaxing to listen to, even at high decibel levels. The vocal intelligibility is superb, with human voices sounding very natural, and I’m able to pick up details, microdynamics, in the soundtrack that I haven’t heard before in other systems.

“As a result, with the right soundtrack, you can really become quite immersed in a three-dimensional soundscape. It truly fulfills the promise of ‘surround sound’ and demonstrates how thrilling and exciting cinema sound can be with the right source material. On top of all that, it is also extremely well made, with tremendous attention to detail. With all of these positive qualities, Alcons offers exceptional value for money.”

“I’m really happy that we have one of the best-sounding rooms in town. It’s clean, intelligible and it has a lot of headroom,” Joos added. “I’m proud of the fact that for the next 20 years people will come to Post 43 to enjoy movies with the very best sound.”