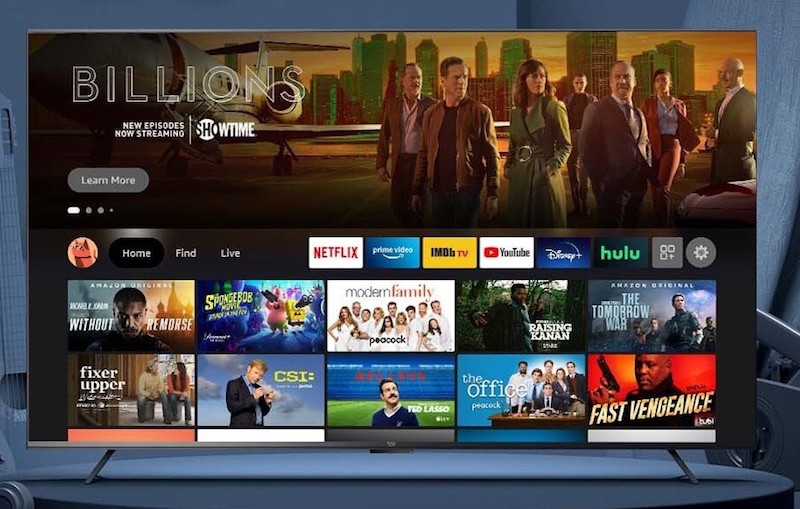 As if Amazon needed a bigger presence in our lives. Now the online retail giant is getting into the TV manufacturing business, too, with Amazon-branded Fire TV sets.

“Alexa, where can I buy an Amazon-branded Fire TV set?”

Depending on which research you read in any given month, the race as to who is the largest selling external streaming device varies between Roku and Amazon’s Fire TV products. Given that Roku’s sales are mostly in the U.S. and Amazon’s are global, the “who is bigger” is always subject to some discussion and analysis. That said, there is no question that despite the market strength of proprietary smart TV systems such as Samsung’s Tizen, LG’s WebOS, and Vizio’s SmartCast, on one hand, and the Android/Google TV sets from Sony, TCL, and an increasing number of projectors from the likes of Epson and others, Roku TVs have the largest share of TVs with non-captive operating systems.

However, Roku and the other brand’s dominance will soon face an imposing competitor. Amazon has just announced that they will soon be offering Amazon-branded Fire TV sets available from Amazon and Best Buy to complement the current Fire TV powered models from Toshiba and Best Buy’s Insignia brand. In addition, Pioneer will also be joining the ranks of sets powered by Fire TV and Toshiba will expand their existing line of Fire TV sets.

The Amazon-branded Fire TV sets will encompass two model ranges. The first is the “Omni Series,” which will bring hands-free Alexa control and a host of audio and video features across a wide range of sizes. The second range are “4-Series” models, which are aimed at the more budget conscious consumer.

Starting with the Fire TV Omni series, there is a range of models from 43 inches up to 75 inches, all of which are 4K and offer HDR10 and HLG. The 65-inch and 75-inch models also will add Dolby Vision. There are three HDMI 2.0 inputs and one more with HDMI 2.1 for the eARC feature.

Clearly there are numerous brands and models with a broader range of video features, but as one might expect the focus with these Amazon-branded Fire TV sets is on the integration of the Fire TV OS. A key part of that is the Alexa integration both for voice search and control for content along with the control of Alexa devices.

Being a device with a screen rather than just a smart speaker, there is “Live View Picture-in-Picture” to show images from a Ring doorbell without interrupting what you are viewing. Later this year, the UI will be updated to show a smart home dashboard to make it easier to check the status of and to control Alexa-enabled devices.

Even better, following the lead of other products, such as the new TCL models with Google TV that offer video calling with the connection of a compatible webcam, you will be able to use Alexa Calling without the Amazon-branded Fire TV sets remote controls. Even better, Zoom video calling is expected later this year for the Omni series models.

Of course, content selection is at the core of a video display, and these Amazon-branded Fire TV sets certainly step up that game. There are voice search recommendation options galore, including more carefully targeted search results.

An exclusive arriving this fall will be a “Play Something” search option for Netflix and an “X-Ray” feature for Prime Video content that provides extended information about a movie or program.

For TikTok fans, you will be able to stream videos on the big screen, rather than huddling around a mobile device.

For sound, the Omni series models will let the user connect to Echo Studio for Dolby Atmos sound and with other Echo speakers for immersive sound. Another feature of the Omni models is a built in far-field mic so that you don’t need to pick up the remote for voice search or when doing video calls.

For the price conscious viewer, the 4-Series models have voice control only via the remote and drop the Dolby Vision and Video Calling features. However, they are built on the same Fire TV OS and are priced at $369.99 for the 43-inch model, $469.99 for the 50-inch model, and $519.99 for the 55-inch model.

All of the new Amazon Fire TV sets will be released on October 27. As an interesting side note, Amazon will offer security updates for at least four years after sets are last available for sale on Amazon. This is a comfort factor commitment not seen from other competing brands.

Rounding out the new products will be a new Fire TV Stick Max. This 4K capable streamer builds on the performance of the current Fire TV Stick models with a processor said to be 40-percent more powerful. That will enable it to easily enable pass through of Dolby Atmos, HDR10, HDR-10+, and Dolby Vision content.

On the technical side, there is now 2GB of memory supporting the 1.8GHz CPU and a 740MHz GPU. The Wi-Fi is also updated to Wi-Fi 6, the first Fire TV product with that. Pricing is $54.99 with availability on October 7.

Most interesting is the return of the Pioneer brand name to video products with a pair of models. These sets are far from the high-end capabilities of the old Pioneer Elite plasma sets, but they do offer an interesting mid-point for a Fire TV-equipped set that seems to sit halfway between the two Amazon-branded Fire TV sets.

On one hand, there are only three, rather than four HDMI inputs, none of which are HDMI 2.1/eARC. Similar to the 4-Series models, these 4K sets have voice control via the remote, rather than through a built-in mic, and there is no video calling. On the other hand, both models do include Dolby Vision.

The 43-inch model is available now at $369.99 and the 50-inch model is shown as “Coming Soon” with a list price of $469.99. It will be very interesting to see how new models from a once storied brand do in today’s more commodity-based TV market.

Last, but not least, Amazon and Best Buy previewed three new Toshiba TV sets powered by Fire TV. Toshiba is already a mainstay for Fire TV, as along with Best Buy’s Insignia house brand they are among the 80 Fire TV-powered models that the consumer electronics giant already offers in the U.S. and Canada.

With availability not set until next Spring, these models will compete at a higher level than either the Pioneer or initial Amazon-branded sets. Higher end features for the 55-, 65-, and 75-inch models will include the four-mic array for hands-free voice control and both local dimming and motion processing. We expect more information closer to the 2022 launch time.

Taken together, these product announcements clearly point to Amazon’s desire to have Fire TV OS sets take a back seat to no one. Smart TV is clearly driving the market regardless of which interface and operating system is used. Along with competition that should lead to better values for consumers, this will incentivize the TV brands to offer even more innovative features.