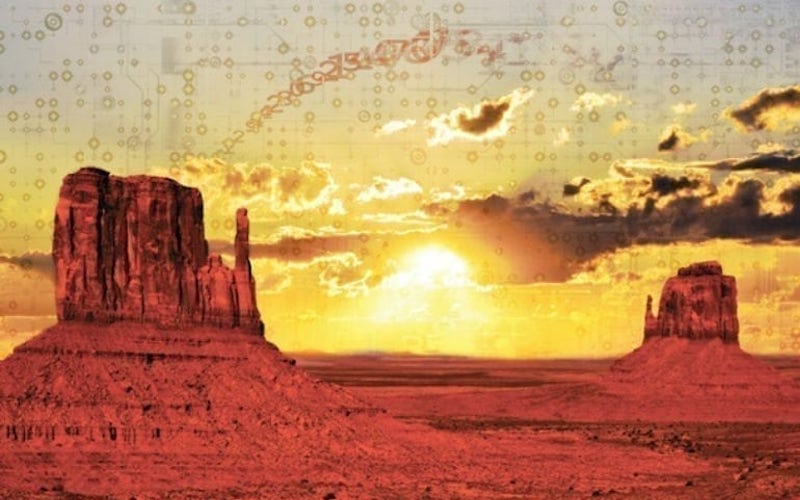 Home of the Grand Canyon, Arizona is known for its extreme heat and desert climate. However, the temperature isn’t the only thing rising in the Copper State. The state’s tech community has been making large strides over the past couple of years, transforming Arizona into the perfect place for any app developer who doesn’t mind applying a liberal amount of sunblock.

For instance, between job growth forecast to double the average among cities in the U.S. and a 188% increase in tech jobs over the past year, Phoenix looks to become known just as much for its tech community as its multitude of resorts.

One major reason for Phoenix’s recent tech boom is the complete revamp of the city’s Warehouse District. Within two square miles of the area, 60 tech startups currently operate inside Galvanize’s technology campus. This is reflective of the city’s tech boom as, according to Mayor Greg Stanton, the number of tech companies operating in the downtown area has almost quadrupled over a five-year period.

In addition to Phoenix, several other Arizona communities are experiencing a heat wave of new enterprise. Building off of its innovative history, Flagstaff has become the home of exciting breakthroughs in medical technology, while Sierra Vista tackles cybersecurity through state-of-the-art STEM programs. Not to be outdone, the city of Mesa has drawn a lot of attention as a haven for aerospace and aviation companies. Lastly, companies such as The Touchpoint Solution out of Scottsdale are making headlines for their role in fostering a culture of entrepreneurship.

Thus, while located hundreds of miles away from Silicon Valley, Arizona has successfully created its own tech community by bringing major talent to the desert. In this Tech Zone, we’re going to highlight the companies and communities that are proving that the Arizona tech scene is no mirage.

How Greater Phoenix Came to be The Connected Place

Starting in the 1980s, major corporations such as Intel and Motorola established critical operations centers in Greater Phoenix, sparking the beginning of the first generation of hardware technology companies that saw the value of doing business there. 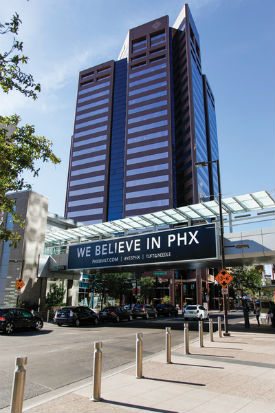 What resulted was an industry base of legacy companies, such as Freescale (now NXP), ON Semiconductor, and Microchip, which allowed for new innovation and startup activity. This second generation of tech in Greater Phoenix saw the formation of homegrown companies like Infusionsoft and WebPT, which deliberately chose to start and scale their businesses in market and have seen tremendous growth and success over the years.

National publications ranging from The New York Times to USA Today have reported on the influx of technology companies expanding to metro Phoenix, whether from Silicon Valley or New York City. However, this trend is not new. It is the result of decades of intentional efforts to build a landscape that allows these companies to thrive.

In addition to the dedicated infrastructure and creation of pro-business policies, the communities in Greater Phoenix have worked to provide residents and visitors amenities and features that offer unique experiences. Bike share programs have popped up all over the region, the music scene is hotter than ever with the Lost Lake Festival in the fall, and the craft beer, coffee, and dining scene is reflective of – if not better than – what you would expect to find in a major metro.

Behind the scenes, another community was building too. An ecosystem for startups and entrepreneurs to collaborate, share helpful tips on funding, build business plans, or even get legal advice. The #yesPHX movement connected entrepreneurs and the ecosystem to provide a support group for companies to bounce ideas off one another and encourage new companies as they exit. Taking a step further, the StartupAZ Foundation is paying it forward and dedicating equity in support of advancing high potential startups.

All of this has provided a foundation for the third generation of tech companies – those expanding from other markets. In the last few years, metro Phoenix has seen expansions from up-and-coming tech companies such as Yelp, Apple, Weebly, Gainsight, and DoubleDutch. The draw to the market is more than a lower-cost option to expand operations; it’s a destination where both business and employees can thrive. 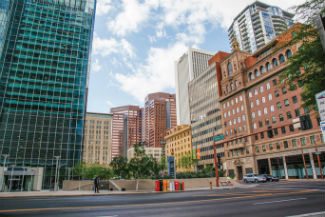 However, there is an underswell of companies in Greater Phoenix drawing attention for their work in the Internet of Things (IoT) and sensor-enabled technology. What has since culminated, is the development of a new movement to highlight this growing activity. Through The Connected Place, the Greater Phoenix Economic Council has built a new industry identity campaign to broadcast the density of companies operating in the region – specifically autonomous vehicles, wearable devices, industrial automation, and cybersecurity.

As if coming full circle, the Intel campus in Chandler, Arizona is responsible for developing Intel’s latest technology and is home to the Internet of Things Group. Companies such as Uber and Waymo are testing innovative technologies that will change the way we get from A to B. Researchers at Arizona State University are testing wearable devices for our troops to communicate with each other in combat. Ingenu has developed the technology for machines to talk with each other. Honeywell Communications has developed technology to keep your home safe. And all of this can be safeguarded thanks to cybersecurity companies like the Kudelski Group.

Recently dubbed “The Connected Place,” Greater Phoenix does more than promote the exciting work happening in the market around IoT and sensors. It’s creating a reference point to identify this center of technological advancement, a place where companies are changing how we live and the way we do business.

Flagstaff, The City with an Innovative Past and Present

While Flagstaff is known around the world as the gateway to the Grand Canyon, the city’s accomplishments stretch far beyond its connection to one of the Seven Wonders of the World. For more than a century, Flagstaff has been leading discoveries in science and technology that have turned its scenic community into a hub of innovation. 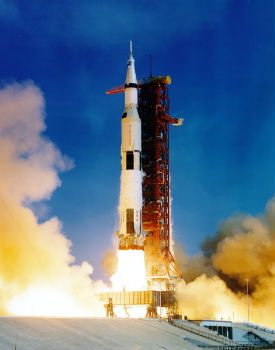 From the time Flagstaff scientists discovered Pluto in 1930, the landmark research occurring at Lowell Observatory put Flagstaff on the map as a leading center for advancements in astronomy and astrogeology. The city’s history of innovation reached a defining moment in the early 1960s when Flagstaff became the headquarters for all field training and research and development associated with manned missions to the Moon. The world celebrated the U.S.’s achievements in space exploration on July 20, 1969, as Neil Armstrong took his first step on the Moon, and Flagstaff took its place in history as the astronomical think tank that made this historic event possible. This effort eventually evolved into what is now the Astrogeology unit of the U.S. Geological Survey (USGS). And today the USGS is very involved in the Mars landings that have taken place the past few years.

As the hub of business and commerce for all of northern Arizona, Flagstaff is the driving force behind the region’s economy. “Flagstaff has rapidly growing, robust, and sophisticated bioscience and computing sectors,” says John Stigmon, president, and CEO of ECONA. “These are becoming the major industry sectors for our region.”

The city also supports a strong employment base in medical device manufacturing as the headquarters for industry leaders W.L. Gore & Associates Medical Products Division and Machine Solutions. There is also a strong research and development base in the field of bioscience. Companies like TGen North focus on pathogen genomic research that includes pneumonia, sepsis, valley fever, influenza, and tuberculosis. Additionally, Senestech, Flagstaff’s first publicly traded company, is changing the world with its humane approach to animal fertility control technology. 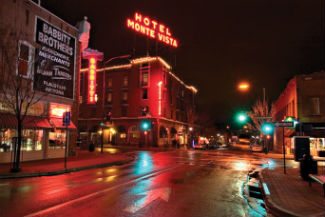 Another factor behind this city’s entrepreneurial success is the Flagstaff Business Accelerator operated by NACET, whose emerging companies include Poba Medical, which focuses on thermoplastic balloon design and development, device and pilot manufacturing, and the production of catheter devices. Another innovative company is Aneuvas, which has developed a neurovascular device aimed at treating aneurysms and will begin clinical trials soon.

Flagstaff is also home to Northern Arizona University (NAU) where students and faculty focus on translational research – specifically cybersecurity, chip design, software, and bioengineering in human and device interface. Over the past five years, NAU has added over 300,000 square feet of new research facility space.

Today, modern-day researchers, scientists, and explorers continue to build upon Flagstaff’s early successes. From medical devices and digital products to healthcare and biosciences, the city has broadened fields of research and opened the doors for greater diversification of business and industry. And while its community has evolved over the years from a pioneer settlement to a metropolis of over 90,000 people in the region, the intention remains the same – to improve the lives of others through the groundbreaking discoveries that will continue to fuel its culture of inspired innovation for years to come.

Aerospace and aviation companies from all over the country are flocking to Mesa, ready to take advantage of what the city has to offer. In a state that hosts 1,200 aerospace companies with over 52,000 employees, Mesa stands out, as the best and brightest in the aerospace industry continue to expand their operations there. 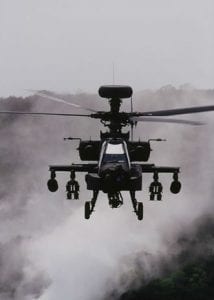 A notable contribution to Mesa’s aerospace industry is GECO Incorporated. Founded in 1995, GECO boasts a clientele that includes Boeing and the U.S. Army. The company’s recent expansion is focused specifically on software development for Unmanned Aircraft System (UAS) controllers. Another expansion is planned for late 2017 that would triple the size of the current facility. The new facility will be used for engineering, design, and software and hardware development, in addition to manufacturing and assembly. These expansions will add around 100 jobs in the coming years.

One of the more exciting developments for Mesa was an announcement from Constant Aviation and Arizona Governor Doug Ducey that the company will be establishing a new operation at the Phoenix-Mesa Gateway Airport – a major economic win for Mesa, adding 200 jobs at an average wage of $60,000/year. Constant Aviation is a full-service maintenance, repair, and overhaul (MRO) operation with a nationwide network. When the facility opens in late 2017, it will contain 74,486 square feet of space, with approximately 50,000 square feet of hangar space optimized for MRO. 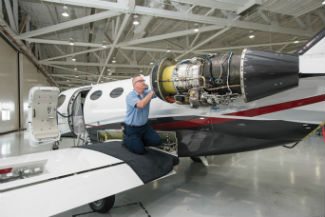 There are many factors that make a city prime for the aerospace industry. In Mesa’s case, the “Phoenix-Mesa Gateway Airport and the City of Mesa [are] incredible partners to work with,” according to Lee Benson, former president and CEO of Able Aerospace Services. Additionally, aerospace companies are able to find all of the personnel they need. This is largely due to Mesa’s abundance of STEM programs. “The Mesa Public Schools Cooperative Education Program and Arizona State University internship program are essential parts of GECO’s business,” GECO CEO and President Jennifer Graves said. While a healthy partnership with the city and a large employment pool may be obvious benefits, there are other aspects as well that make Mesa great for the industry. For example, Mesa has ideal and consistent weather conditions for test flights. And Arizona’s low cost of living, as well as its recreational appeal, make it easy to convince employees to make the move.

Mesa has proved itself as one of the major aerospace and aviation hubs in the country as companies continue to move and expand there. As Governor Ducey said in regards to the industry, “Arizona’s excellent quality of life, friendly business climate, available pool of talented employees, and lean regulatory environment continue to make it the location of choice for key players in the aviation industry.”