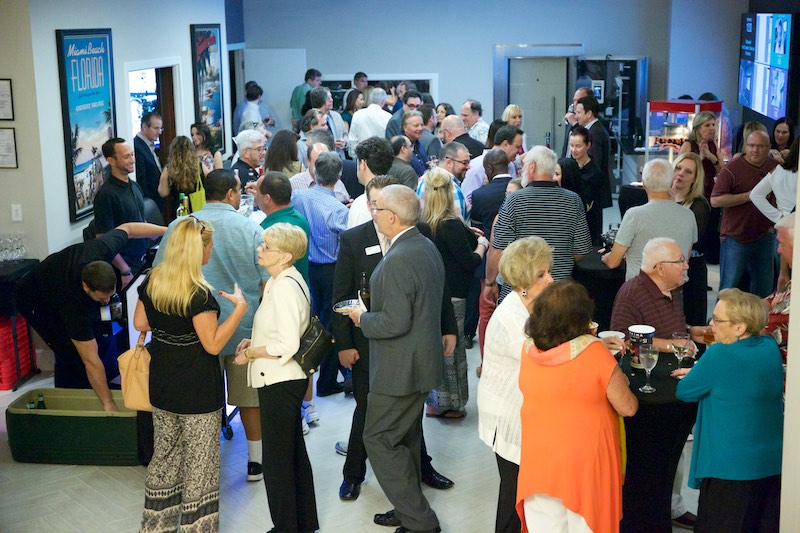 Jeff Galea, CEO and founder of Boca Theater and Automation Inc. (BTA) in Boca Raton, FL, says he is “painfully aware” of the issues that South Florida deals with regarding power quality, so when he learned of the Rosewater Residential Energy Hub, he was the first to sign up for one. Galea installed one of the first Hubs in his custom integration showroom in 2015.

“When I set out to build BTA’s Design Center [pictured above], I was determined to create an infrastructure capable of supporting sensitive electronic devices that would not suffer from the usual power issues that inevitably plague important demonstrations turning them into excuses and reboots,” Galea explained. “Not only do we host our own on-premise data center and require reliable electronic systems for our staff, but we build customer systems on-site and are responsible for them while they are in our possession.”

With all of the events that Galea was planning to host, along with daily operations, he simply could not risk a repeat of what he experienced in his previous leased facilities.

“I was designing for the long game,” he noted, “and I was willing to make an investment that would serve us well into the future.”

Galea says that he saw the Hub as the first product in an important category capable of solving critical problems for his company, new clients, and existing clients. “

It provides 100-percent clean power on a large scale,” he said. “I knew my clients were struggling with power issues and there was no other solution even close to RoseWater in terms of surge protectionand clean power delivery with zero transfer time,let alone the ability to integrate a renewableenergy source.”

Galea designed his facility for both critical and non-critical loads with RoseWater power delivered to color coded “clean power” outlets. His goals were to eliminate power quality issues in his new facility on day-one, provide battery backup to critical loads, and integrate solar energy capable of powering all critical loads both for energy savings and long-term grid outages.

“The frequency of semi-brief power outages in South Florida made it imperative that we design protections into our infrastructure from day-one,” Galea said. “I desperately needed a large-scale system that would support our mission critical operation – ideally one which was scalable, supportable, and ultimately repeatable.”

Having a background in Electrical Engineering, Galea naturally researched the idea of building and delivering large-scale power conditioning and UPS capabilities to his operation and ultimately to his client base.

“I spent a fair amount of time researching and designing a system large enough to handle my needs, but I didn’t feel it would be scalable or repeatable without a huge investment, even if I compromised on renewables,” he said. “In the end, I came to the conclusion that this was a product category that needed a huge amount of resources and continuing R&D to address growing market demand in South Florida and the rest of the U.S., let alone marine and island-based regions.”

After sharing his discoveries with Rosewater founder Joe Piccirilli, they came up with a plan to integrate the RoseWater Hub into his facility so that BTA could be an R&D test bed.

“Joe understood the power issues and the large-scale production problems really well, and he brought a team of highly capable engineers to my facility to guarantee success,” Galea said.

After four years with the Hub in his Design Center, Galea says that “Everything just works. The Hub gives our customers and our company a sense of preparedness and security during electrical storms and sunny days alike.”

Since Galea hosts many events at his facility, he says he does not have to worry about glitches that would occur in front of customers. He added that unexpected issues do not happen with the Hub.

As a professional in the field of AV, Galea believes the top three requirements for a successful project are to appropriately manage heat, power, and terminations.

“If these three critical components are addressed at the very beginning of a project, then random issues and early failures will simply not be a problem,” he explained. “While there are solid solutions available to mitigate heat buildup and provide validated and certified terminations, delivering clean power is not so easy. Many times, the power conditioner, power strip, or rack mounted UPS are the single point of failure.”

Galea pointed out that “AV never sleeps” and that issues are generally reported during high-use periods such as evenings, weekends, holidays, and during parties. This means that issues tend to come up at the least comfortable time for both clients and staff and are typically critical in nature.

“While heat build-up and termination issues are generally solved up front and work well for long periods of time, power issues are random, and no amount of preparation can fully eliminate them…until now that is!” Galea concluded.

Boca Theater & Automation just won an industry award for a job in which they used the RoseWater Hub. Since Galea believes that “the three cornerstones of any successful project in South Florida include clean power, proper management of heat, and ANSI/TIA-certified copper and fiber terminations,” the RoseWater Hub was just what the doctor ordered.

The award-winning project included a flexible and fault-tolerant main equipment closet (MEC) to service a 20,000 square-foot home, a mission critical business, and a world-class home theater.

Galea has worked with the people at RoseWater for so many years that he knows just about everyone on the team. Very few maintenance matters have come up, and those that did were urgently resolved by the RoseWater team.

“I enjoy talking to the RoseWater team about new projects,” Galea said. “Our team at Boca Theater and Automation feel as if RoseWater is a part of our home team. I really compliment RoseWater’s engineering team. They are responsive, dependable, and thoughtful. I couldn’t ask more from a partner.”

The main thing Galea had to say about RoseWater Hub’s installation execution was that the preparation was excellent. He said that he designed the new building’s power distribution infrastructure and determined where it would be located. RoseWater sent a floor template so that he could work out the precise areas and pre-drill necessary holes.

When the RoseWater deployment team arrived, they found there was a glitch in the way the unit was to get into the building. The team rescheduled for the next day and handled all the logistics. The rest of the installation went like clockwork. Galea said it was “like watching a NASA control room scene.” The unit, by the way, continues to power the facility to this day.

“What I expected from the Hub was simple and carefree reliability. That’s what I have and now that I have lived with it for years, I can’t imagine life without it.”