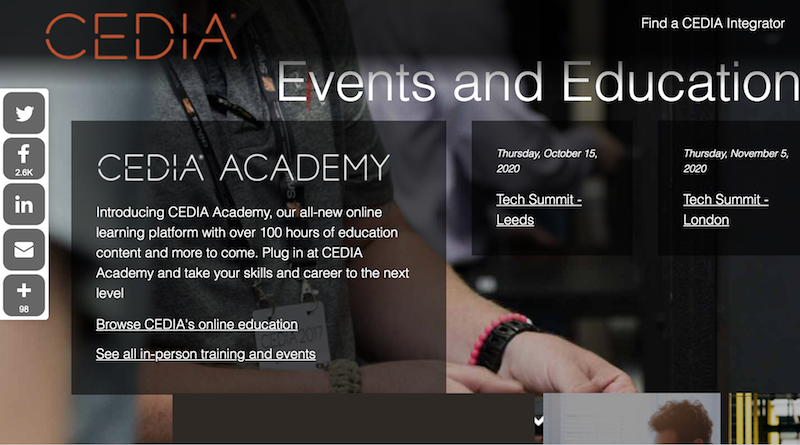 As the new CEDIA website was being updated – including the new CEDIA Academy education platform – another project has been progressing: the revamping of CEDIA Certification. With the assistance of the CEDIA Certification Commission and the Technician Job Task Analysis (JTA) task force, David Whitney, the association’s director of certification, is seeing the results of a months-long process. “The first thing we did was ensure we had the right volunteers involved,” Whitney said.

Whitney and those volunteers then looked carefully at the actual work that was being performed in the field – and how technology had advanced since the last certification update.

“Every few years, it’s critical that we go back and look at what jobs there are and how we define them,” Whitney said.

The decision was made to start reverse-engineering those certification requirements at the entry level. “We wanted to first make certain that the best practices for those coming into the industry were very clear,” Whitney added

That work – including reviews of more than 1,000 job descriptions and a survey of those in the field – yielded the new CEDIA Certified Cabling and Infrastructure Technician (CIT) and CEDIA Certified Integrated System Technician (IST) Certifications.

Another critical aspect of the new CEDIA certification development: ANSI (American National Standards Institute) accreditation, specifically the ISO/IEC 17204 conformity standard. As CEDIA Certification Commission Chairman Dennis Erskine noted, “We’ve heard a common thread for many years, namely, ‘What’s the true value of CEDIA Certification?’ When somebody sits down with an architect, a home builder, an interior designer, or any allied trade, and they tell that person, ‘I hold a CEDIA certification,’ what does that mean to them? In many cases, those other tradespeople hadn’t heard of CEDIA, much less CEDIA Certification – but now, having the same body that recognizes their trade recognizing ours, that’s a new level of credibility.”

Achieving that accreditation – especially for a global workforce – is no small task. “I thought I was busy when I was Chairman of the CEDIA Board,” Erskine said. “This is a brand-new level. There’s an incredible amount of work involved, and time spent developing policies and procedures.” That work includes (and is certainly not limited to) creating policy manuals that are audited again against ANSI requirements, the development of committees to review and update standards and ethics, and, of course, creating the certification exam.

Creating the exams for these certifications comes with their own set of challenges. First and foremost, there must be an absolute firewall between CEDIA’s Education and Certification departments – the association can’t have its instructors “teaching to the test.” The next challenge is building an exam that’s not impossible to pass, but that isn’t terribly easy, either.

“We beta-test the exam with an army of volunteers,” Whitney said. The Certification team establishes a baseline of knowledge that can be applied to any technician on the globe (another detailed and lengthy process) and tries to hit a “sweet spot” of difficulty. “Obviously, if you’ve got a 90-plus-percent pass rate, you’ve made the exam entirely too easy,” Whitney explained.

“The organization is actually growing up and becoming a force to be reckoned with,” Erskine added. “The other thing that is important to add is that this is the result of long two years of board discussions about setting these goals and objectives.” To do that, Erskine said, “We had to define ‘What is our industry?’ And it became very simple. Any place a family would spend a night is our turf. That could be a hotel room. It could be a yacht. It could be an airplane.

“But most importantly, it’s the family home.”