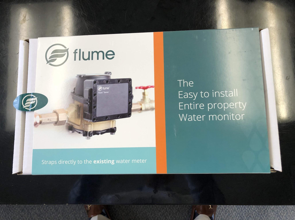 The folks at Flume sent me one of their smart water monitors to test out. Unlike most of its competitors, Flume installs by strapping onto the water meter versus cutting pipes. Needless to say, this concept intrigued me, and I couldn’t wait to see if it would work as promised. 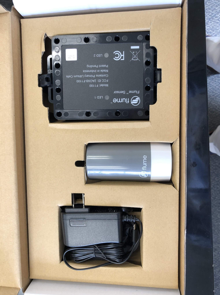 I wanted to understand how Flume installs without a plumber. “It works by reading the magnet in your water meter that moves as you use water, then transmitting that data via radio frequency to the Flume Bridge,” explained Flume’s Joanna Birns. I think Flume’s approach here is very clever and simple. Definitely the kind of thing where you wonder why someone hadn’t thought of this before.

The Flume comes in unassuming cardboard packaging and opens up easily revealing the Water Sensor, Bridge, quick start guide and even includes a set of latex gloves for working with dirty water meters. 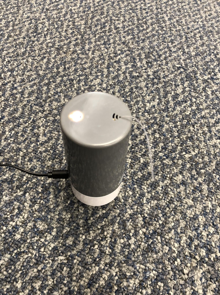 I had a couple of false starts getting the Flume Bridge online. Flume’s app uses a method to pair where its local SSID scans for Wi-Fi networks and clones the password. Flume didn’t like our office’s Ubiquiti network but worked fine with an eero network at another site. Throughout the process their support folks were fantastic through an included chat feature inside the Flume app.

After getting the Flume Bridge online, the app prompted me to install the water sensor. The wizard was very helpful in identifying where my water meter lived. I’d never opened a water meter cover before, and the included latex gloves definitely came in handy. In less than one minute I’d documented to make/model of the meter and strapped the sensor around the side of the brass housing. The app continued along, prompting me to run a stream of water from a hose or sink. I turned on the hose and less than a minute later the app splashed a “Congrats!” screen on my iPhone. The app then automatically configured its leak rule designed to catch common offenders like leaky toilets, broken irrigation heads and running faucets. 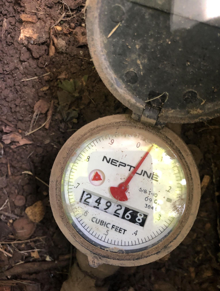 Since installing the Flume, I’ve become a little paranoid about water usage. I never realized how much we were using! Our irrigation system alone uses over 600 gallons of water each time it runs. It’s hard to justify that amount of water usage when it’s staring me in the face vs. getting the water bill each month and blindly paying it. Flume is bent on arming their customers with knowledge so they can fix leaks and ultimately conserve water. There aren’t many pieces of technology that can claim a high cool factor while being good for the bottom line and planet at the same time.

I lived with Flume for over a week and can confidently say it’s completely changed my perspective on water usage. It would be nice to see Flume integrate with other home technology systems to deliver their metrics on a single dashboard. I’m also intrigued about Flume as another layer of occupancy sensing (I’m thinking security and independent living scenarios). I’m looking forward to seeing how Flume does over the next few years as they continue to spread their wings through partnerships with local municipalities.