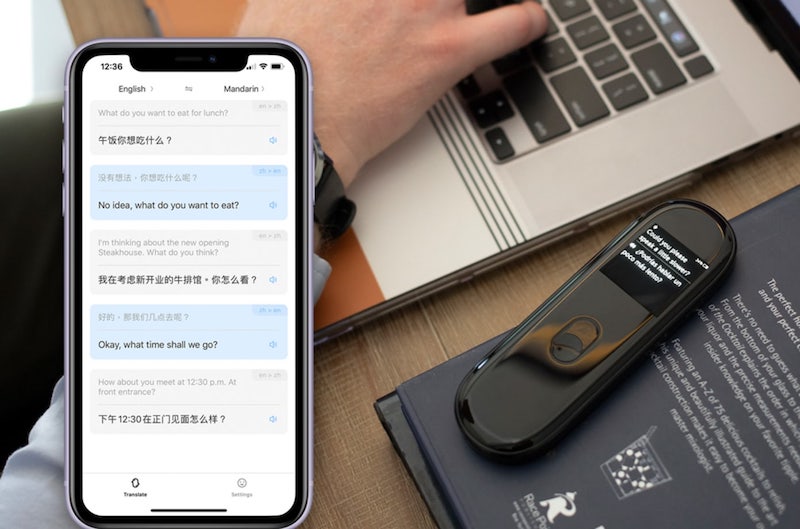 I’ve had to learn more computer programming languages than I can count over the years but, for some reason, I’ve never been overly successful at learning a new spoken language. And, as can be attested by the professor who taught my freshman English class in college, I’ve only mastered English with limited success.

During my years of international business travel this wasn’t a major liability. I spent time in overseas on various projects, and there was always enough English spoken for me to be able to successfully communicate with people. The more people get off the beaten path when traveling, however, the higher the probability they will encounter situations where English isn’t spoken.

The idea of a device that can universally translate between different languages has been a part of science fiction for many years, including The Hitchhikers Guide to the Galaxy, Doctor Who, Star Trek, and many others. Today, the CheetahTALK Plus Translator comes as close as I’ve seen to fulfilling this dream.

The original Cheetah CM Translator was released on Indiegogo in 2019 by CheetahTALK. After a successful campaign, it is available today from Amazon and through the CheetahTALK online store.

Other attributes of the Cheetah CM Translator:

I had an opportunity to try the new CheetahTALK Plus Translator that is being introduced through Indiegogo. CheetahTALK has made several improvements over the original Cheetah CM model:

Hands On with the CheetahTALK Plus Translator

I received a pre-production unit to work with for this article. The CheetahTALK Plus Translator is approximately 5 x 1.5 x 3/8 inches. It is sleek looking and fits easily, and comfortably, in your hand.

Setup was very simple. After fully charging the unit with the supplied USB cable, I used the QR code in the quick start guide to install the app on my smart phone. After providing permission for the app to use Bluetooth, I was able to connect the device to my phone by simply pressing and holding the up/down button on the front of the unit. Next, the unit prompted me to connect it to my Wi-Fi network, and it went through the process of downloading a firmware update. After the update was installed, the CheetahTALK Plus Translator was ready to use.

Working with pre-production hardware can always be a bit of a challenge. When I first turned on the CheetahTalk Plus Translator, the on-screen messages were all in Chinese. However, by simply swiping to the right on the display, I was able to get to what appeared to be to a settings screen. There was a globe icon next to some Chinese characters and when I selected that, it allowed me to select English from a long list of different languages. All the on-screen messages were instantly displayed in English and the problem was solved. This isn’t an issue I would expect that buyers of production units would encounter. However, it is good to know how to change the on-screen language in case, for example, you pick it up after your child was playing with it and you suddenly find you can’t read the screen anymore.

When the button is released, the CheetahTALK Plus Translator will very quickly translate what was spoken. The translation will be played over the device’s speaker and the text of what was spoken will be displayed in both languages on the screen.

For testing, I installed the Chinese & English language pack. It was quickly downloaded to my smart phone and required 150 MB of storage.

The CheetahTALK Plus Translator handled translating general conversations with ease. It was very fast, and after a short period of time it became very natural to work with. The display of the conversation on the screen in both languages is one of the best features of the CheetahTALK Plus translator. With most translators you can only assume that the translator properly interpreted what you said and translated it into another language. With the CheetahTALK Plus, a quick glance at the display allows you to completely validate that the device interpreted your speech correctly, which could otherwise lead to significant issues. My lawyer friend mentioned that she has seen a reality TV show where a person marries someone from another country that doesn’t speak English. Incorrect translations between the couple have led to problems between them that would otherwise have been avoided.

The CheetahTALK Plus translator did have some translation issues in two situations. First, it seemed to struggle to properly interpret what was being spoken to it when in a noisy room with multiple people speaking at once. It had trouble differentiating one person’s voice from another to focus on the person speaking to it. In a quieter environment, this wasn’t an issue.

Second, it couldn’t always understand technical jargon. A physician friend of mine tried to speak to the CheetahTALK translator as if he was giving medical orders (in English) to a Spanish-speaking nurse. In these cases, the device wasn’t always able to properly understand the sentence structure of what was being said to properly translate it. Again, being able to review what the device heard on the screen avoided a potential issue. Rewording the sentence usually resolved the problem.

CheetahTALK Plus vs. Translation Apps from Google and Apple

The Business Case for the CheetahTALK Plus Translator

According to The Motley Fool, the top 10 industries with the most immigrant workers are:

In all these cases, a translation tool like the CheetahTALK Plus Translator can improve communications between business managers and new immigrants that may not be fluent in English.

According to the 2018 census there are approximately 18 million people in the U.S. that speak Spanish but don’t speak English fluently. The CheetahTALK Plus Translator can be a valuable tool for better integrating these people into broader society and provide them with more job opportunities. I know people in the construction industry who have commiserated to me that they can’t hire Spanish speaking workers because they don’t personally speak Spanish and couldn’t properly manage them. The CheetahTALK Plus Translator can be a bridge in the business world to an untapped population of people who don’t speak English.

There are also situations where English speaking and non-English speaking people need to interact in the business world. For example, smart homes technology today isn’t just being added by homeowners to existing homes; it is being built in during the construction of new homes. Builders understand that homeowners want smart home technology and that they can charge a premium for a home that includes it.

During the construction process, smart home integrators have to work with different “trades” that are involved in building homes, including electricians, HVAC installers, dry wall installers, painters, and others. Problems can arise when some of these people have limited ability to speak English or may not speak English at all. The CheetahTALK Plus Translator can be a valuable tool for allowing people who speak different languages to communicate better in a business setting.

While I found that the CheetahTALK Plus Translator was an excellent product, there are some areas where I think it could be improved.

Overall, the CheetahTALK plus Translator is an easy-to-use tool. While it is ideal for people traveling to a foreign country, it can be useful in many more situations.

Currently the number of offline language packs is very limited. The CheetahTALK Plus Translator will become an even better tool when the availability of language packs is expanded. This will alleviate people from having to worry about how they will be able to communicate if there isn’t a reliable internet connection.