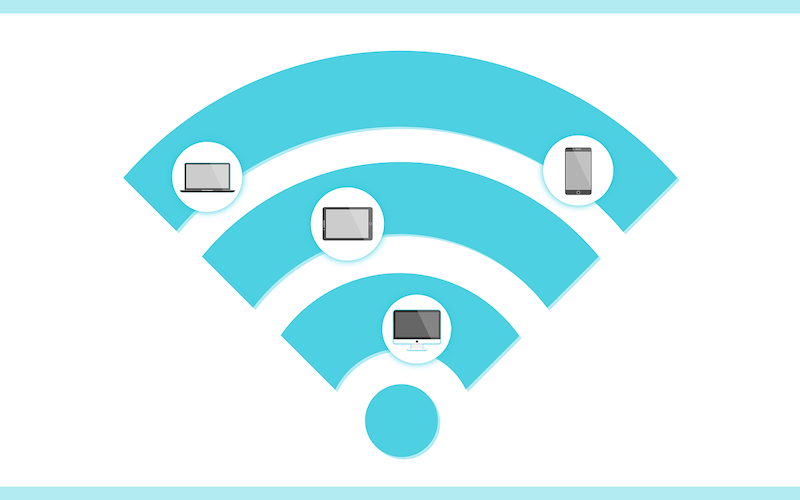 Image by 200 Degrees from Pixabay

If you want to make your home smarter, the first step is to choose a platform for connecting your smart devices. The choices are simple, but the decision may not be.

The simplest and least expensive approach is to use Wi-Fi, a point-to-point wireless technology that consists of a router connected directly to a modem, along with a series of satellite nodes or modules placed around your home to provide complete coverage. The router shares data and enables all the devices on your network to communicate with each other, typically using a 2.4 GHz radio frequency (5 GHz for older routers). You are probably already using Wi-Fi to provide access to the internet and streaming television.

The other option is to set up a hub to control your devices. For those who choose this option, Z-Wave and Zigbee are the dominant protocols and control most of the market. Both Z-Wave and Zigbee operate as mesh networks in which all nodes are interconnected and work together to route data efficiently. Mesh networks self-configure, distributing workloads dynamically. Their greatest advantage is that as you add more devices, your connection actually becomes stronger.

For most people, Wi-Fi is sufficient. You can add devices to what you already have at a low cost without buying any additional equipment.

However, if you want a truly smart ecosystem that can control your home’s temperature, lighting, security, audio, video and more, a hub may be necessary. While Wi-Fi can connect, at most, a dozen or so devices into a network, Z-Wave and Zigbee can each connect more devices than you’re likely to ever need.

Zigbee can handle as many as 65,000 nodes, while Z-Wave can handle 232 nodes. A node is a connecting point (or “touch point,” since it’s wireless). Connections to smart devices, bridges, and switches are all nodes, so the number of nodes needed can add up.

Z-Wave and Zigbee have limitations, however. If you choose Zigbee, there are significant range limits. For Zigbee to function, all devices must be within a range of about 35 feet. Z-Wave has a range of 100 meters (over 300 feet), while Wi-Fi’s range is about 150 feet (although range extenders can increase that number significantly). In addition, when Z-Wave or Zigbee is used, all devices in your network must be compatible with your chosen platform.

Wi-Fi is a communication standard. It’s based on technology that is continuously improving. Companies throughout the industry are constantly introducing new products designed for WiFi use.

Z-Wave is an open protocol created by Zensys, purchase by Sigma Designs in 2018, and now owned by Silicon Labs. Z-Wave offers both forward and backward compatibility, meaning that it’s compatible with all Z-Wave devices, including those no longer on the market. Silicon Labs plans to keep Z-Wave compatible with products that have not been launched yet by Z-Wave Alliance members – ie. Z-Wave will always be backward and forward compatible with any Z-Wave product in the future.

All Z-Wave devices must pass technical and market certification before they receive the certified stamp of approval. All certified devices feature the Z-Wave logo on their box, letting the consumer know the device in question will work with their Z-Wave smart home hub and other Z-Wave devices in their smart home network.

Zigbee compliance is more limited, as all devices must be certified compliant by the Zigbee Alliance, an association that includes promoters (e.g., Amazon and Comcast); participants, who are developing compliant products; and adopters, who receive access to Zigbee standards and specifications. Gaining certification from a standardization board is an added expense and takes time, so some manufacturers avoid it.

It’s possible to connect devices that are not compatible to your hub but doing so will require additional hardware and working around the compatibility issue can be difficult and frustrating.

A hub provides a common connection point for all devices in a network. It’s a central location for monitoring and managing all your electronic devices, so you can check and adjust everything according to your needs.

Cost is an important factor to consumers when deciding on a protocol to run and control their smart home. With Wi-Fi, everything runs through your router, so there’s no need to buy a separate hub or any other equipment. A hub can be relatively inexpensive, typically costing $50 to $150 (although the more functionality you’re looking for, the more you’re going to pay).

You may have to purchase a higher quality router than the one provided by your internet service provider. In addition, Wi-Fi uses more power than either Z-Wave or Zigbee. All devices in your Wi-Fi network will need an ongoing supply of power or strong batteries (although many manufacturers of Wi-Fi devices have put growing emphasis on increasing battery life).

Z-Wave is a low-power technology and Zigbee uses even less power. Both will use less power than Wi-Fi, and your batteries will generally last longer.

The more devices you connect to your Wi-Fi router, the slower and more crowded your connection will become. Most devices send infrequent commands that use little bandwidth, but some activities require significant bandwidth and can slow your Wi-Fi down. Conversely, with a mesh network (like Z-Wave or Zigbee) the more devices you add, the stronger your connection becomes, which improves speed and reduces the latency of commands.

If you already have Wi-Fi, you can keep your network intact and create a separate hub for any new devices, but you’ll need to be certain that they don’t interfere with each other.

Z-Wave and Wi-Fi operate on different frequencies, so your Z-Wave hub won’t affect your Wi-Fi network, regardless of how many devices you have on it. One advantage of Z-Wave is operation in the sub-gigahertz radio spectrum, which means your Z-Wave smart home devices will never interfere with your Wi-Fi devices.

WiFi, Z-Wave, and Zigbee are all well-established and continue to evolve. Wi-Fi has been available since 1997. Z-Wave was introduced in 2001 and has been continuously developed specifically for the residential smart home market. Zigbee became standardized in 2004.

Analyst firm Gartner predicts that products and services based on the Internet of Things (IoT) will generate $300 billion revenue by 2020, with sales of 26 billion devices. Given that home automation is a rapidly growing market, it’s unlikely that Wi-Fi, Z-Wave, or Zigbee will become unavailable anytime soon.

New protocols are being introduced, but they will have to have competitive advantages to capture significant market share. However, the IoT is still in its early stages and a significant breakthrough could produce a new market leader.

So which protocol should you use? It’s up to the consumer but a good recommendation is to weigh the pros and cons of range, compatibility, speed, security, cost, connectivity, and possible interference as outlined above and decide which solution is right for you.