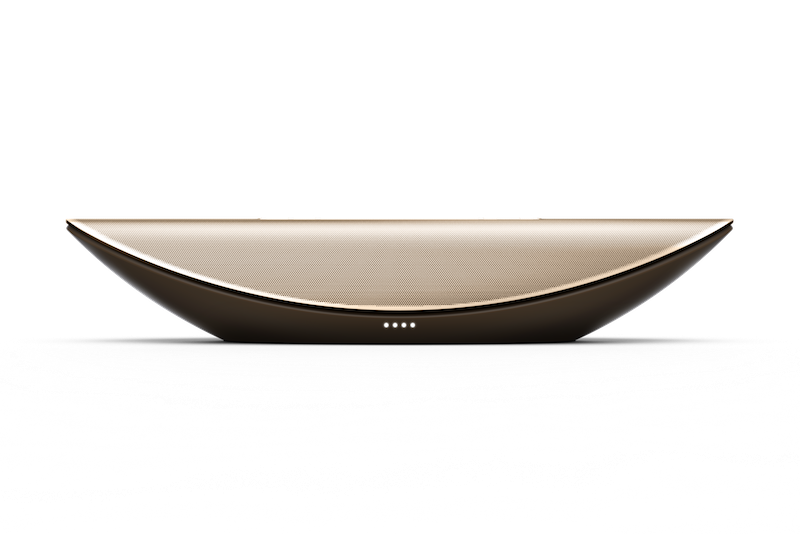 Right out of the box, the Cleer Crescent smart audio speaker blew me away with its solidly built crescent shape, all-metal control panel, stainless steel mesh grille and rubberized foundation.

At its widest, the speaker is 26 inches across the top and about 13 inches at the narrowest location its base, so it’s not tiny, but it also does not dominate the room.

The speaker’s champagne color, which is currently the only finish option, is elegant, unique, and neutral enough to blend into most rooms.

My first thought was, “This is a sculpture that happens to play music.”

Cleer Crescent looked great, obviously, but how complicated would it be to set up be and, most important, how good would it sound? 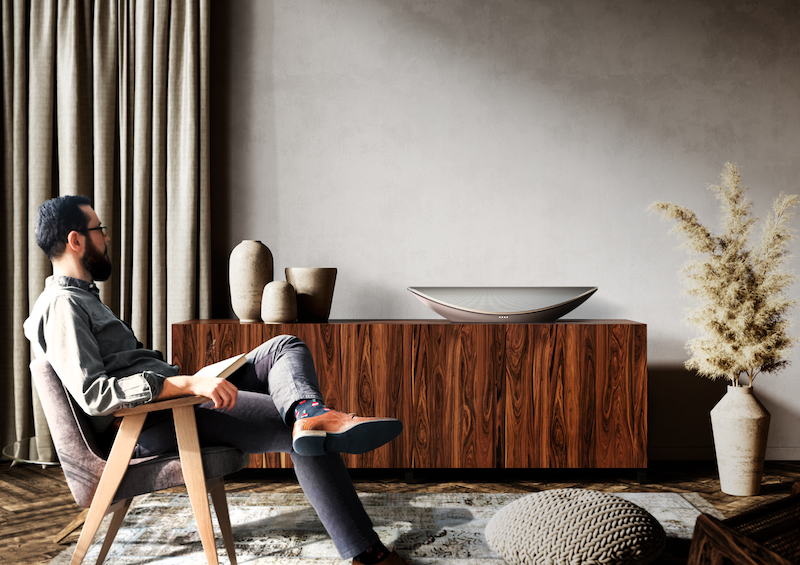 Cleer Crescent is not a “portable” speaker, so there is no battery to charge, just an AC power cable and power adapter to connect and plug in the wall. Once connected, Crescent powered on automatically and the four LED indicator lights on the front of the speaker lit up.

Related: Roam is the Little Brother That My Sonos Move Speaker Always Wanted

Although the Crescent is a Bluetooth speaker, its user manual recommends the installation the Google Home app on a smart phone to link the speaker to your Wi-Fi network and to enable voice control. While every device these days has its own app, for some reason the fact that I would need to re-new my “relationship” with Google Home to get the most out of my Crescent speaker came as an unwelcome surprise.

There was once a time when Google Home and Amazon Alexa co-existed in my home. I’m not a huge fan of either service, but it was quickly clear that Alexa’s development had such a head start over Google Home that there was no reason to keep both devices connected. Then my family doubled down on Alexa, creating a multi-room doorbell alert and paging system throughout the house. Now, thanks to Cleer, I would be re-introducing Google Home, and I worried that, like before, she just wouldn’t be as helpful as Alexa. I was wrong. Right out of the gate, Google Home proved that it had come a long way in two years (or more) since I last used the app.

I was curious why Cleer picked Google Home over Alexa, so that’s the first thing I asked Cleer’s Vice President of Marketing, Aaron Levine, in a follow-up call. He reminded me that his relatively young company already offers Alexa-integrated speakers in its small line of speakers, but for Crescent’s price ($699 MSRP), Google Home offered feature differentiation from other competitors in its price range. There was also the issue of retailers not especially liking the idea of selling an Alexa product, which directly supported a potential competitor in Amazon.

Levine also noted that Google Home was the best option for Crescent’s linear speaker array, with the app’s wide variety of streaming content as well as better implementation of Cleer’s software.

Getting It Up and Running

Once the app was installed and Wi-Fi connected, I said, “Hey Google, play Taylor Swift, Evermore album,” and Google replied, “Playing Taylor Swift Evermore on Spotify,” and that beautiful first track, “Willow,” began to fill the room. It sounded glorious, like the audio equivalent of a beautiful sunrise (Oops. I got a little carried away loosely quoting lyrics from the album.)

The audio performance was warm, rich, and full, sounding like a much larger speaker.

Crescent also enables playback from Chromecast, AirPlay 2, and Bluetooth, as well as an external playback device via an AUX, optical audio, or Ethernet cable.

During playback, it is easy to locate the volume up and volume down buttons, which are separated by the play/pause button in the middle of the control panel on top of the speaker. By pressing the mic on/off button, you can mute or unmute the built-in microphone. A mic LED light will indicate that the microphone is muted.

In addition to the unique industrial design, build quality, and audio performance of Crescent, I really enjoyed toggling through the three available audio modes that were created within the speaker’s software. By pressing the audio mode button on the control panel, an LED indicates each audio mode with a different color. For immersive stereo music, the blue LED represents Stereo Widening Mode, which is described in the user manual as a “well-defined, wide stereo soundstage that expands well beyond the speaker’s physical placement. 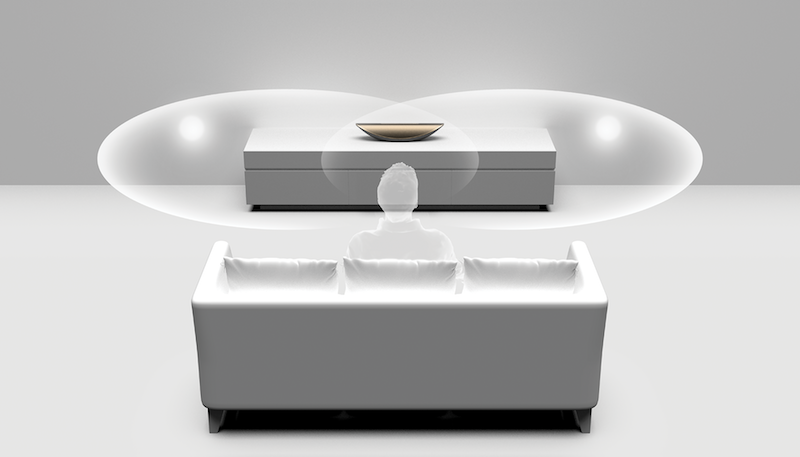 The red LED is for TV/movies or gaming. I asked Levine if this was a soundbar mode, but he clarified that without an HDMI input on the Crescent speaker, lip sync delays could occur from a TV or movie and that there were no adjustments available to fix them. Instead, he explained, 3D Mode is for people who enjoy streaming their music from YouTube or other music services on their TV. In this mode, Crescent surrounds the listener in three-dimensional, high-definition audio regardless of wall locations or reflected acoustics. 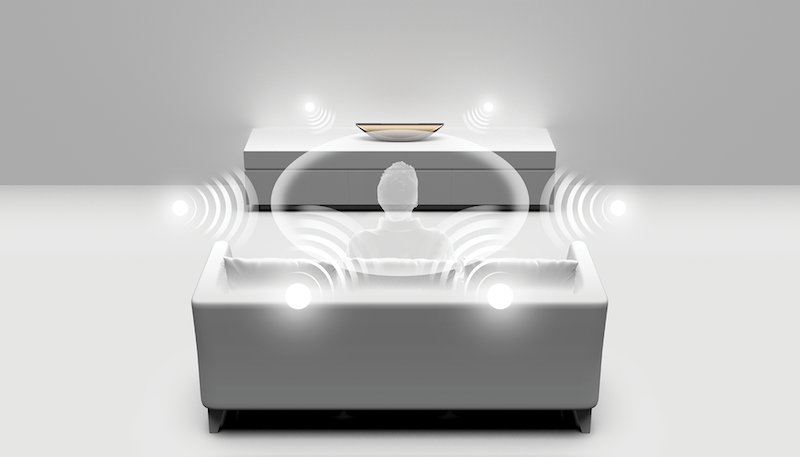 My personal favorite audio mode on Crescent is Room Fill Mode (a green LED), which was designed for party or casual listening. It is described as “for occasions with multiple listeners… [featuring] an ultra-wide sweet spot that engages listeners equally in every corner of the room.”

In this mode, the room is filled in a way that while may not fool your ears into believing they’re surrounded by speakers, definitely opens up and envelopes the space effectively. 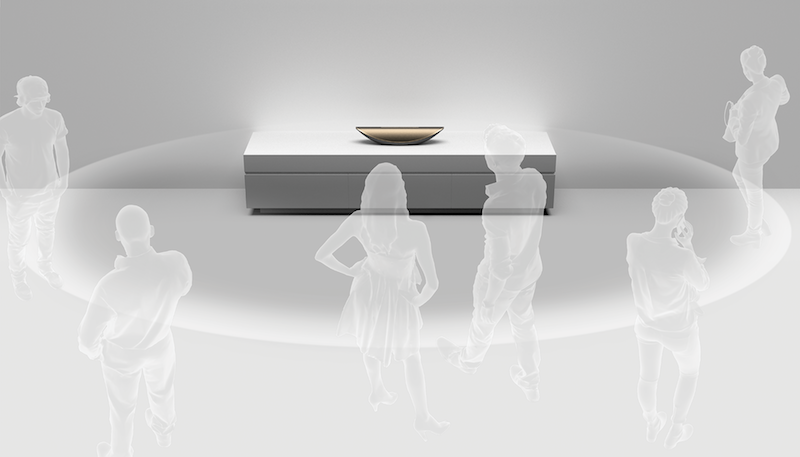 Aesthetics are only part of the reason that Crescent is shaped like a crescent. Inside the speaker is an eight-speaker linear array featuring 40mm full-range drivers. Cleer built the speaker in an array because they wanted to create a compact integrated speaker that would perform like a larger 2-channel or more traditional speaker. By building the linear array and putting some beam-forming technology into it, they were able to get the speakers inside to work in conjunction and to provide a more expansive linear sound that you wouldn’t be able to get if you had just two or four speakers. 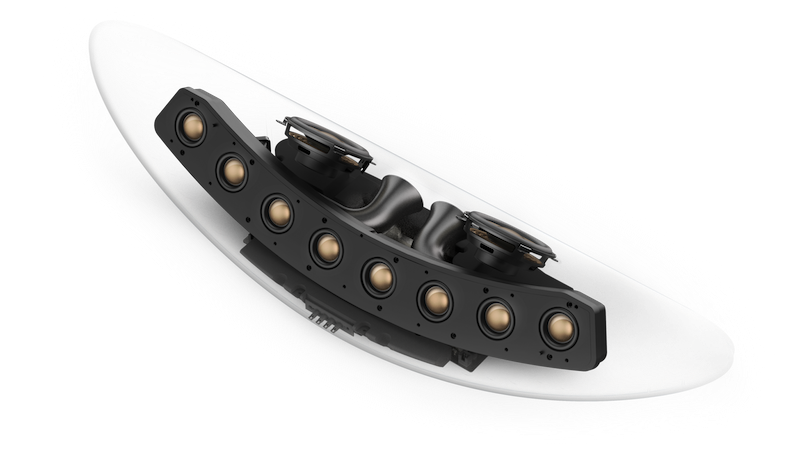 According to Levine, the crescent shape was chosen to achieve the proper width while also being aesthetically pleasing enough that it didn’t look like a soundbar. The shape, which features a reinforced glass substructure, enabled Crescent to be “sonically pure” because all eight speakers operate simultaneously when powering up.

The exterior is built from a single stainless-steel bent rail that is handmade at Cleer’s factory. The top control panel is made from aluminum, adding to the speaker’s rigidity and higher end appearance.

The goal behind the design of Cleer Crescent, according the Levine, was to simplify the listening experience and provide a new engaging way to listen. The company, he said, wanted to create a speaker with a voice assistant that’s “absolutely stunning to look at where everybody in the house is going to be happy that you have a speaker out on display.”

That’s exactly what happened in my house. My wife saw the speaker and said, “That can go in my office!”

Not so fast, Karen…