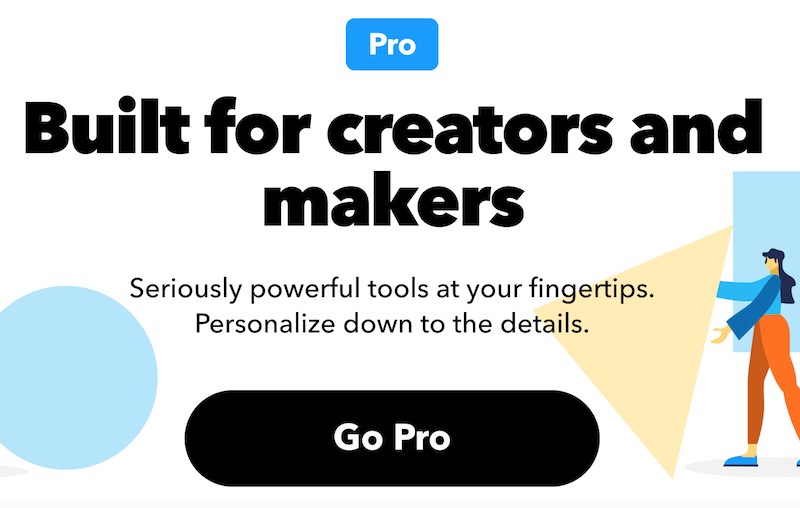 Wednesday, October 7, is the deadline IFTTT set for users of their service to sign up for IFTTT Pro https://ifttt.com/pro and leverage a “set your own price” payment plan. Users who don’t sign up and have created more than three applets will have their excess applets “archived.”

Initially, IFTTT only committed to honor the price people chose for one year. However, after listening to online criticism from users, IFTTT founder, Linden Tibbets, came back with a compromise where people who signed up for IFTTT Pro using the “set your own price” payment plan would keep that payment plan forever.

The minimum price you can set is $1.99 a month, or $23.88 per year. According to IFTTT, they have more than 20-million users worldwide. If IFTTT is successful at signing up half of these users for IFTTT Pro – at the minimum payment of $1.99 per month – this still equates to a revenue stream of almost 240 million dollars per year.

I believe every company has the right to make a profit. Unfortunately, in the software development world, where the open source community has tried to create an environment of openness, collaboration, and freedom, I believe IFTTT’s strategy is going to be detrimental to the smart home industry. It has taken the step of putting manufacturer’s APIs (Application Programming Interfaces – if you are not familiar with this term you can find a definition on Wikipedia here) behind a pay wall.

I believe the price of IFTTT Pro will be a significant barrier for people who don’t currently have any experience with smart home technology and want to begin the journey of turning their existing home into a smart home.

Starting October 8, someone who just wants to get started with IFTTT will be faced with paying $120 per year just to integrate, for example, their first few inexpensive light switches and a smart thermostat with their Ring Alarm or Alexa smart speaker. That price may be a high enough barrier of entry to scare people away. If it does scare people away, this is going to be bad for the industry as a whole.

To its credit, IFTTT has created a system where manufacturers of smart home products could hide the complexity of their API from consumers and allow people without programming skills to easily integrate the smart products that they bought into a smart home ecosystem. This broadened the appeal for smart home products and eliminated the cost for a manufacturer of having to document, publish, and provide consumer support for their API. Manufacturers only had to pay IFTTT a fee for publishing their service.

A long list of manufacturers has chosen to publish their API’s through IFTTT. Some well-known examples are:

Some of the above companies have both created an IFTTT service and published an API for use by developers to integrate their products with smart home platforms. Others, like iRobot and Wyze, for example, only allow control of their products through IFTTT.

I don’t mean to pick on Wyze. They have been a leader in breaking down price barriers in smart homes. The original Wyze Cam and Cam Pan, selling today at only $20 and $30 respectively, significantly undercut the competition when they were released. Wyze has done this again with their new $30 video doorbell. However, starting October 8, one day after IFTTT’s deadline for existing users to signup for IFTTT Pro, how price competitive are these products if a homeowner has to pay IFTTT $120 per year to integrate them into their smart home? Similarly, will people with smart homes continue to purchase iRobot vacuums when Neato offers both IFTTT integration and a published API for their connected vacuums?

The above can be contrasted with the path that Rachio, a leading manufacturer of smart irrigation controllers, has taken. Rachio has not only created an IFTTT service but has an easy-to-use public API. This API has been leveraged to directly integrate their irrigation controllers with a wide range of smart home processors/hubs, including:

IFTTT’s transition to a paid service still provides Rachio users with plenty of choices for the integration of their irrigation controller with a smart home processor/hub, without added fees.

IFTTT has said that their free service includes the ability for users to leverage an unlimited number of applets created by manufacturers. Unfortunately, my experience has been that manufacturers have created few, if any, applets that integrate their products with smart home processors/hubs. This will force every user with a smart home processor/hub in their home to sign up for IFTTT Pro.

Linden Tibbets wants manufacturers to step and create more applets. This would increase people’s ability to leverage their APIs without having to step up to IFTTT Pro. Unfortunately, that isn’t where we are today. If IFTTT is successful at getting manufacturers to create more applets, that may help new IFTTT users in the future, but it won’t help people through this transition period, and most smart home owners will be forced to subscribe to IFTTT Pro.

To help today’s users, what I believe is needed is an expansion of IFTTT’s free tier, where a smart home owner can have unlimited applets that:

I believe a free plan that encompassed the above would:

I’m sure that some people wouldn’t even be happy with the plan I have outlined because it limits access to some services, such as Google docs. However, I think it is a reasonable line in the sand to separate smart home product manufacturers’ APIs from advanced service offered by IFTTT that should be tiered with IFTTT Pro.

IFTTT’s move to extend “pay what you want pricing” for people that signup for IFTTT Pro into perpetuity shows they are listening to their users and have some flexibility in their plans for IFTTT Pro. Hopefully they will continue to listen, take the needs of the smart home community into account, and find a mechanism that provides the smart home community with access to their devices without incurring a financial burden.