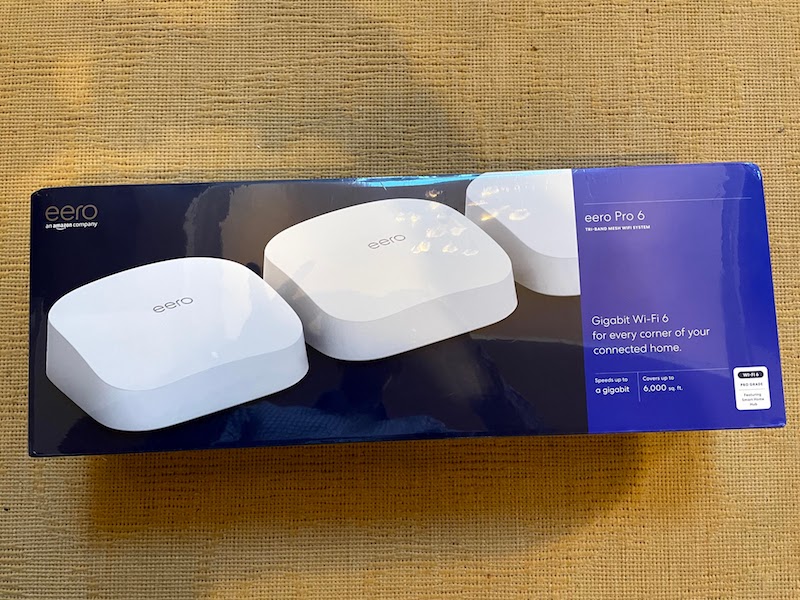 The folks at eero sent me their new eero Pro 6 mesh system to try out last month. This is the first new product since their recent acquisition by Amazon so I was doubly interested to see how this new release would stack up against my circa 2017 eero Pro installation.

The eero Pro 6 3 pack comes in an attractive hinged cardboard box, opening to reveal the sleek mesh eeros. The new units are much larger than their predecessors and feel substantial and solid in your hand.

Because I already had the eero app and an existing network installed, I was interested to see how they were going to handle the upgrade. I’ve come to expect simple and easy installation with eero, and this upgrade process didn’t disappoint.

The eero app asked me if I wanted to add or replace a unit. I picked an eero in a bedroom and followed along. In no time at all, the eero app removed the old unit and added the new one. So far so good.

I continued along until I needed to upgrade what eero calls the “gateway” unit. This is the “brain” of the eero network and usually hardwired to the router or modem. In this case, I have the gateway eero bridged (only handling Wi-Fi versus both routing and Wi-Fi) because our FiOS network needs a proprietary router. This last replacement went seamlessly.

The new units were running a lot hotter than the previous eero Pro units, which I later found out is considered normal by the manufacturer. I uninstalled an eero Beacon, which had been covering an outdoor area, after eero assured me that the three they sent would cover what four units were handling before. I was skeptical of this claim but did as they asked for the purposes of this review.

After running a few speed tests, I was impressed with the results. In many cases, there was a doubling between the previous eero Pro units and the new Pro 6 system.

The new system runs on Wi-Fi 6, which claims download speeds of up to 1 Gbps as long as you have a Wi-Fi 6-capable device. My own results were pretty dramatic.

I ran the same speed test on an older eero Pro unit versus the new eero Pro 6 with a Wi-Fi 6-capable iPhone 12. The download speeds were more than two times faster with the new system (379 MBPS versus 170 MBPS). Very impressive.

Following the initial installation, I left the units alone for 24 hours and asked my family for feedback. Complaints immediately began pouring in. My wife and kids reported “glitching.” I normally take their feedback with a grain of salt since the slightest headwinds are usually enough to foment insurrection. In this case, however, I witnessed the issues for myself. We were in the middle of watching YouTube TV when the Wi-Fi cut out, and all the eero lights turned red.

The hardwired connections were all fine because I tested to make sure. It was late enough where we all went to bed, but the next morning I woke up to a dead Wi-Fi network.

I played around with the gateway eero, power cycled it, and everything came back online. One thing I noticed was the automatic updating feature hadn’t run properly. I wondered if the default firmware version I had may have had some bugs in it. I tried running the update manually, and it managed to upgrade all of the eero Pro 6 units except the gateway.

At the urging of eero support, I swapped this unit with one of the other upgraded eeros and tried again. This time it worked but things took a little longer since the network has to be reprovisioned each time the gateway changes.

After the new update to eeroOS 6.0.2, things seemed to settle down with the reliability I’ve come to expect from eero returning along with domestic peace and quiet.

I’ve had the opportunity to install a few more eero Pro 6 networks since this initial review and I can share the eeroOS 6.0.0 firmware flakiness isn’t isolated (or at least not for me). As soon as the update runs and brings the eeroOS version up to 6.0.2 or better, all is well. I’m not sure why it happened, and eero support was not forthcoming about any other users experiencing the same thing (why does technical support always makes you feel like you’re the only one?).

The new eero Pro 6 was “in like a lion, out like a lamb” for me. Some like to complain about pricing (the eero Pro 6 three-pack is $599). I wonder aloud what these folks are comparing the $599 to? Something that doesn’t work? That price is pennies to pay for the peace of mind that eero delivers.

Wi-Fi used to be something that we had issues with in our home. We may have 99 problems now, but eero sure ain’t one. I would highly recommend buying the new eero Pro 6 gear and make sure you update them before rendering final judgment.