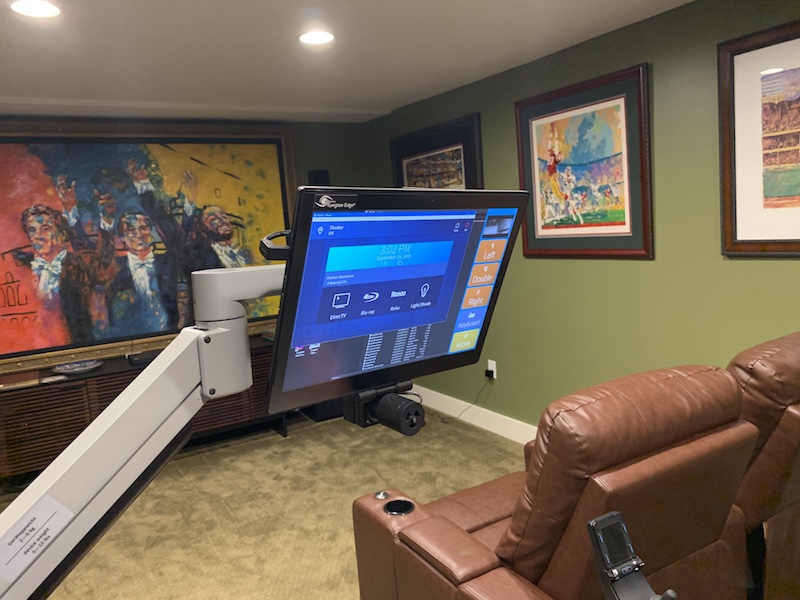 Gramophone, a Baltimore, MD-based technology integrator, will stop at nothing to help a client have a better quality of life.

The company, a member of the Home Technology Specialists of America, was approached about three years ago by a long-time client who was looking to update and upgrade their home theater. Gramophone began working on plans for the project, but it was interrupted and put on hold when the client had to leave the area for a work-related assignment in another part of the country – an assignment that would last two years.

Requirements Changed in an Unpredictable Way

By the time this client returned the Baltimore area, however, his situation had changed dramatically as evidenced by the fact that he showed up to Gramophone in a wheelchair. While away on assignment, the client received a devastating and life-changing diagnosis of amyotrophic lateral sclerosis (ALS), a disease more commonly known as Lou Gehrig’s disease. ALS is a progressive neurodegenerative disease that results in an ongoing loss of muscular control. Still, even in the face of this dire diagnosis, the client sought to move forward with the home theater project, but with changes to accommodate his new situation.

The limitations that ALS imposed on the client were daunting…and they rendered standard system control interfaces useless.

“It was really upsetting to me when the client showed up for our first appointment after he had returned from his assignment – entering our showroom in a wheelchair,” said Gramophone Experience Manager (and project manager on this installation) John Paranilam. “Basically, his disease had progressed to the point where he had no control of his muscles from the neck down.”

The client’s new set of circumstances were so severe that the project seemed daunting. His client’s loss of muscular control meant that Paranilam had to get creative at finding alternative control interface solutions. The first thing he considered was to move to voice control via Amazon Alexa.

“At the time, it seemed that the best solution was to use Amazon Alexa control. So we did a really nice Dolby Atmos theater with an amazing screen and projector with the system controlled by Alexa,” Paranilam said. “But he was kind of limited with this setup – there were just certain things he wanted to do that the Alexa system didn’t allow him to do on his own.”

So it was back to the drawing board. Working with the client over the next 18 months or so, Paranilam began researching alternatives. It was then that the client, who had understandably conducted significant research into ALS, suggested eye tracking. The team at Gramophone had not heard of any systems incorporating an eye tracking control solution in a sophisticated residential AV installation. However, four potential suppliers of eye tracking solutions were identified and Paranilam began reaching out to each of these companies to figure out if there was any type of available system interface.

It turned out to be a long slog for the Gramophone project manager. As is often the case, he struggled to get return calls from these companies and was getting quite frustrated. Finally, one company – Eyegaze – returned his call and discussions ensued to figure out how best to proceed. In a way, this situation turned out for the best, for although Eyegaze was the only one to return his call, this was the option that appeared to offer the most capabilities with the minimum amount of software and programming required to implement.

“It was basically a ‘Windows’ program on top of a Microsoft Surface Pro,” Paranilam said, pointing out the relative simplicity of the overall design.

Paranilam’s level of concern increased when multiple people told him that Eyegaze technology could not be integrated because the systems were not compatible. On at least three separate occasions, other software suppliers and even one of the sales team at Eyegaze said that what Gramophone wanted their eye tracking system to do…could not be done.

Again, Paranilam was undeterred. After hours on the phone in an in-depth back-and-forth with the Eyegaze technical staff, they finally collectively came to the conclusion that this system just might work.

The Eyegaze solution is conceptually a keyboard replacement which allows the user to use his eye to select and click a key or button on a visual menu. “Your eye kind of acts like a mouse, and your gaze is the click,” Paranilam explained. “The Eyegaze solution is mostly used for texting or email. It was never conceived as a system control solution.”

The company’s technical support staff, in consultation with the Gramophone team, felt that their system would work to activate control. But Gramophone’s Crestron programmer Dan Sanzone had to come up with a custom screen to make it work. After studying the system and learning more about the Gramophone’s system design plan, Sanzone confidently told Paranilam, “Based on what you’re telling me, it’s going to be pretty straightforward for us to get that done. I can do it.”

What Sanzone designed was a fairly standard Crestron graphical control screen to be shown on a tablet with a camera that scans the eye and is the primary control interface. The client uses his eye to select an item on the tablet screen –say a source button – and then by intensifying his gaze on his selection the system interprets that as a click. Though the programming behind it is relatively sophisticated, the system is simple for the client to operate.

“The client has full control,” Paranilam said. “He can scroll through his Amazon Music catalog, or browse for his favorite Netflix movie and then select and launch it…all without any intervention by his human helper.”

When the system was deployed, tested, and then turned over to the client, Paranilam stayed for a couple of hours after the rest of his team left to make sure the client was comfortable with using the system. Up to this point, the Gramophone project manager had been intensely task focused to get this system designed, installed, and operable. Now…it was done.

It was at this point when the client’s helper took him aside and told Paranilam with some emotion, “You’ve just changed his life.” And that’s when it hit Paranilam…this system will literally improve the quality of his client’s life…

In the end, Paranilam says the system works even better than he could have imagined. Now in daily use by the client for more than two weeks, the client is reliably controlling the entire system with his eye, and entirely by himself. Exactly what his goal had been from the beginning.

Up to now, there was nothing in Gramophone’s standard system design toolkit that could accommodate such a unique client need. Only through doggedly researching alternatives, then deeply researching competing eye tracking solutions, and turning to the company’s internal software programmers, could Gramophone meet the specific need of this particular customer.

This is What ‘Custom’ is All About

“I am so incredibly proud of the entire Gramophone team,” said Gramophone CEO Andrew Davis. “While this particular situation is not one we commonly encounter, it presented us with a unique opportunity to offer this client something he richly deserved, a full Gramophone experience with a system designed and delivered to improve his quality of life. It was an honor to be entrusted by this valued customer to create this life-enhancing solution for him.”

It was a sentiment echoed by Jon Robbins, executive director of Home Technology Specialists of America (HTSA), the home technology consortium.

“Gramophone is one of the founding members of HTSA and this story clearly demonstrates how they represent the finest of what custom integration is all about,” Robbins said. “On behalf of the entire organization, I offer our hearty congratulations on a job well done…and on not just meeting the needs of a client, but truly touching the soul of a human being in need.”