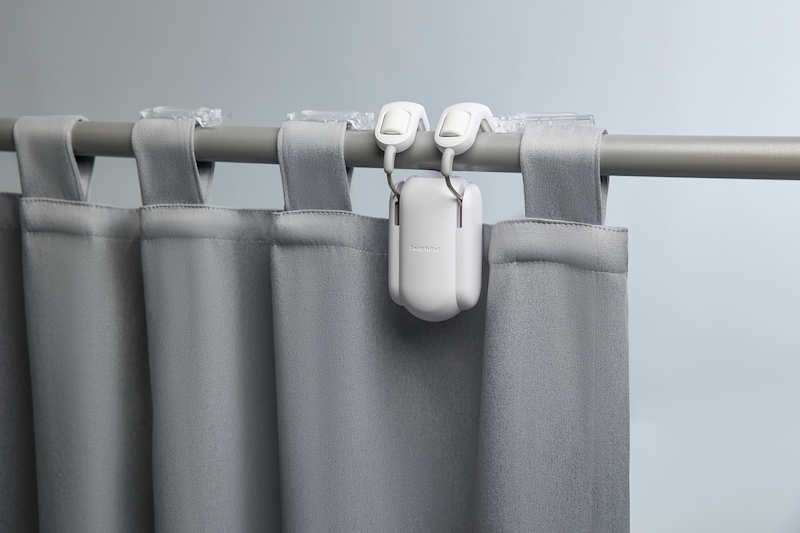 The new SwitchBot Curtain Rod 2 is a 2022 reddot design award winner and improves on the original SwitchBot Curtain’s ability to work with curtains mounted on a curtain rod through a redesign of the mechanism that clamps the motor assembly to the curtain rod. 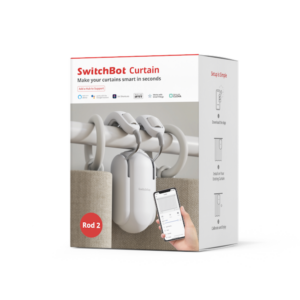 For those that aren’t familiar with SwitchBot and their products, the SwitchBot Bot is a small, inexpensive actuator that can be used to press a button and transform a dumb device into a smart device. The original SwitchBot Curtain is a small robot that mounts onto a curtain rod, or curtain track, and turns almost any curtain into a smart, motorized curtain. Both devices communicate over Bluetooth and can be operated locally by using the SwitchBot app on a smart phone or the SwitchBot Remote.

SwitchBot also offers the SwitchBot Mini that integrates these products with a homeowner’s WiFi network and the SwitchBot cloud. It allows them to be controlled remotely using the SwitchBot app, integrated with other cloud connected SwitchBot products, via Amazon Alexa or Google Assistant, and through Siri Shortcuts or IFTTT. It integrates through other smart home platforms, such as SmartThings, through community developed drivers that utilize the SwitchBot Cloud API (application programming interface). For instance, I developed a free Crestron-SwitchBot driver that utilizes the API. That driver can be found here.

The original SwitchBot Curtain was compatible with a wide range of curtain mounting solutions including curtain rods, U rails, and I rails.

However, there were situations where the original SwitchBot Curtain didn’t meet customer expectations, such as on telescoping curtain rods. So, SwitchBot set out to improve the product.

The SwitchBot Curtain Rod 2 is compatible with curtain rods that are between 15mm and 40mm in diameter (.59 in. – 1.57 in.) and grommet, back tab, tab top, and ring top mounted curtains. SwitchBot still manufactures the original SwitchBot Curtain for people who have curtains mounted to U rails or I rails. 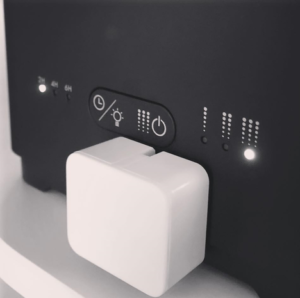 Hands on with the SwitchBot Curtain Rod 2

I tried the SwitchBot Curtain Rod 2 with tab top and grommet curtains mounted on a 1-1/4-inch wooden curtain rod. As I said above, installation is very easy.

The first thing to do before installing your SwitchBot Curtain Rod 2 is to charge its internal battery. A USB cable is included in the box for this. According to SwitchBot, it takes 6.5 hours for the device to be fully charged.

Next, if this is your first SwitchBot product, then you will need to go through the process of installing the SwitchBot app on your smart phone, or tablet, and creating an account. SwitchBot offers apps for both iOS and Android devices. 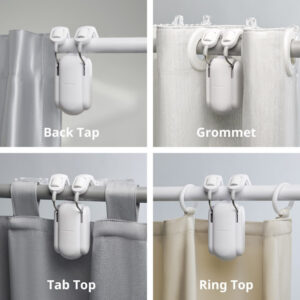 Once the app is set up, you start by simply pressing the “+” button in the upper right corner of the screen to add a new device. You then choose the SwitchBot device that you want to install from the list displayed on the screen. In this case I chose “Curtain.”

To connect your smart phone tablet to the SwitchBot Curtain Rod 2 over Bluetooth, you press and hold down the button on the device for two seconds, until the device’s LED starts blinking. Then, you press the “Next” button on the screen.

Once the connection is made to the SwitchBot Curtain Rod 2, you will be asked to name the device and select what room in your home the curtain is located. If you have just installed the app, then you may not have set up any rooms yet. If that is the case, you can go back and set some up later and then associate this SwitchBot Curtain Rod 2 with a specific room by editing its settings.

Next, you specify what kind of curtain rod you have (U-Rail, Rod, or I-Rail). In this case I chose that I had a rod. Now you indicate whether you have the original SwitchBot Curtain or the Curtain Rod 2.

At this point, the instructions are customized based on your prior selections. Because I said that I had a curtain rod, the next step was to choose whether I was had grommet, ring top, tab top, or back tab curtains. For curtains with grommets, SwitchBot requires that plastic clips be attached to each grommet. These clips are interconnected with plastic ball-chain. For tab top and tab back curtains, there are plastic clips that must be attached to the first three curtain tabs. All of these adapters are included in the box.

How to install SwitchBot Curtain Rod 2 on Grommet Curtains

How to install SwitchBot Curtain Rod 2 on Ring Top Curtains

How to install SwitchBot Curtain Rod 2 on Tab Top Curtains

How to install SwitchBot Curtain Rod 2 on Back Tab Curtains

SwitchBot offers a number of options for automating the operation of your curtains. First, you can simply set up a schedule of when you would like your curtains to open/close. You choose the time you want this action to take place, whether this is a one time event or on what days of the week you want it to be repeated, the exact position you want the shade moved to between 0% and 100%, and whether you want the motor to operate in Performance Mode or Silent Mode. Performance and Silent modes offer the homeowner a choice between speed and noise level. More on this later.

The SwitchBot Curtain Rod 2 includes a light sensor that faces outward toward the window where the curtain is installed. The operation of the curtain can be automated based on the light level being measured by the device. For example, you can choose to open a curtain when the sun comes up and close it when the sun goes down. A graph of light levels, measured by the light sensor over time, are displayed so you can choose a specific light level that will trigger the action. For example, for privacy you can choose to close your curtain at dusk versus when it has become fully dark outside.  This option is currently listed in the app as being in “Beta.”

You can also set a delay before the curtain is opened or closed. This is useful as a timer. For example, if your houseplants appear to need more light, you can open your curtain and then create a delay to close it later in the day. This would allow your plants time to get some needed sunlight and then close the curtain so your home doesn’t heat up too much from the solar gain of the sun shining in through the window.

You can open/close your curtain using Google Assistant, Amazon Alexa, Siri Shortcuts, and IFTTT. For example, you can simply say “Alexa, open, or close, [name you assigned your SwitchBot Curtain Rod 2]. There is no need to include the very annoying “Ask SwitchBot to…”

You can integrate the operation of your curtains with other cloud-connected SwitchBot devices. For example, you can use a SwitchBot Meter that measures the temperature and humidity in a room to close a curtain if it gets too warm in the room. This is very easy to setup by simply creating a scene in the SwitchBot app that is triggered when the temperature is above a specific value. The scene then closes the curtain.

Scenes are very useful for triggering multiple SwitchBot devices with a single trigger. For example, a scene could be created that closes all the curtains in your home that are automated with SwitchBot Curtains and SwitchBot Curtain Rod 2s when you leave your home. That scene could also trigger a SwitchBot Bot to press the arm away button on an older security system that doesn’t provide for smart home integration and turn off appliances plugged into SwitchBot Plug Minis. Scenes can be manually executed through the SwitchBot app or by speaking a voice command to an integrated smart speaker. They can also be triggered at a scheduled date/time.

SwitchBot makes a few other products that work with the SwitchBot Curtain Rod 2. 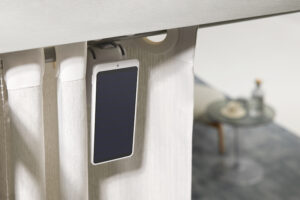 Impressions and Suggestions for Improvement

However, the SwitchBot Curtain Bot 2 isn’t perfect, and there aspects of the product that people need to be aware of as well as ways it could be improved.

Second, unlike a cord operated curtain track, when the SwitchBot Curtain Rod 2 closes a curtain, it isn’t operating against the outside edge of the curtain. Instead, it is pushing against the second point where the curtain attaches to the curtain rod. Because of this, when the curtain is fully opened by the SwitchBot Curtain Rod 2, the exposed area of the window isn’t as wide as it would be with a cord operated curtain track that pulls against the outside attachment point of the curtain. This probably isn’t a problem on larger windows but could be an issue on smaller ones, especially if the window is covered by center-open, double-sided, curtains. This was much more of an issue with the tab top curtain I tested than a grommet curtain because the plastic adapter included in the box for the grommet curtain held the folds of the curtain fairly close together.

I also found that the combination of plastic clips and ball-chain required for a grommet curtain wasn’t very aesthetically pleasing. I don’t know what the solution of this could be except to redesign the clips so the ball chain is hidden on the window side of the curtain.  On the other hand, the plastic clips needed for tab top and back tab curtains were almost invisible, and no adapters are required for ring-top curtains.

The SwitchBot Curtain Rod 2 provides two different operating modes — performance mode and silent mode. Silent mode is supposed to move the curtain at a slower speed and produce less noise. However, I found little, if any, difference between the two modes. The SwitchBot Curtain Rod 2 is reasonably quiet but not silent. It produces about the same amount of noise as other mid-priced, motorized window covering products that I’ve worked with before. But, the promise of Silent Mode is the ability to operate the curtains in a bedroom without disturbing someone who is sleeping. SwitchBot simply needs to improve Silent Mode, so it fulfills this promise.

In prior articles I’ve discussed the value of automating window coverings in a home for:

If SwitchBot would offer people some better thought out combo packs and volume discounts so they could save money but purchasing products to automate multiple curtains, it would help people incorporate the above benefits into their smart homes with the SwitchBot Curtain Rod 2.

Check Out – SwitchBot Review: An Easy (and Cheap) Way to Smarten Up Your Home