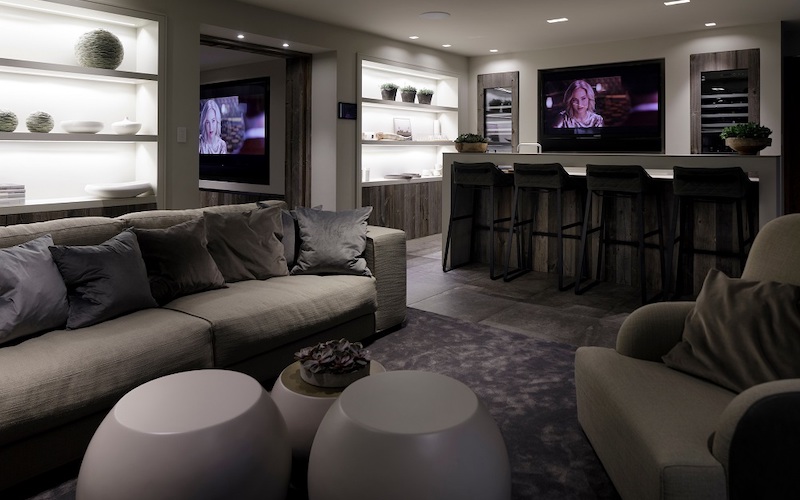 The client was renovating and expanding their family residence and wanted a complete building automation system, incorporating all AV, lighting, curtains/blinds, security, access, and climate function to maximize their enjoyment of the home.

A Crestron CP3 processor provides the backbone to the home system, integrating all the different components while offering enough programming versatility to enable the system to be tailored to the client’s individual requirements. All the elements of the home are accessed through on-wall Crestron touch panels or through an iPhone or iPad app. For convenience, all have the same user interface. There are also Crestron handheld controllers in the rooms containing TVs and Lutron keypads across the residence for the lights and window treatments.

High on the agenda was a comprehensive AV system to fulfill the needs of the family and their guests (they entertain friends regularly). A multiroom AV system has been created using a Crestron DigitalMedia system for 4K video distribution and a 14-zone Crestron Sonnex system for sound. The family’s media sources can be enjoyed throughout the property, both inside and out.

For music, the integrators chose an Autonomic Mirage Media Server, which stores and plays the owner’s music collection along with online streaming services and radio via TuneIn. The device also acts as an Apple Airplay receiver so that guests can connect their iPhone to play their own music. The house also contains three Sky Q boxes, an Apple TV, and an Amazon Fire; offering a good range of viewing choices.

A combination of Bowers & Wilkins and Triad speakers produce high-quality sound in all the living areas, and Sony Active soundbars provide greater audio definition and atmosphere wherever there is a TV. In the formal lounge area, a 55-inch 4K Sony TV has been discreetly fitted to a lift and swivel Future Automation wall mount which, at the touch of a button, raises it from a built-in bookcase and rotates it to a pre-defined angle.

Intuitive Homes and Ultamation have implemented a custom “room linking” feature so that when the owner is entertaining, he has the ability to group specific areas into one single zone, while simultaneously being able to control volume and equalization in individual zones. This means, for example, that if the guests move rooms or choose to go outside, he can add or drop areas. Another inventive aspect of the system is a “follow me” button, which enables music or video to seamlessly move between zones. 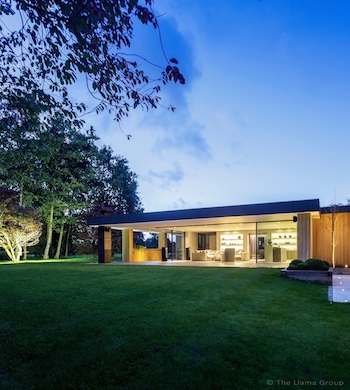 The lighting scheme, which comprises 96 circuits, along with the curtains and blinds, is integrated through a Lutron HomeWorks QS System. Selected rooms have been set up with a “morning” scene whereby the blinds are raised twenty minutes before the alarm goes off and the lights gradually fade up to coincide with the alarm sounding. Conversely, a sleep timer can be initiated, which gradually fades down the lights and TV or music volume over the final 10 minutes before the specified time.

All the bedrooms have a “bedtime” button which will turn everything off except for other bedrooms and their en-suites. This function is also activated by part of the integrated Texecom alarm system. Likewise, when the last person in the house leaves, they can turn everything off using a “house off” button by the two main exits, or by setting the alarm. On arrival to an empty house, a “home” button or an alarm unset command triggers a lighting pathway to the kitchen area.

At sunset, the system automatically checks the lighting status in each room and, if the lights are on, triggers an “evening” scene for that area. For energy efficiency, all the equipment and lighting in a room can be turned off if it is unoccupied for a specified period of time.

Entry and security have also been improved with the introduction of home integration. A BPT access system has been fitted at the main gate which rings the Crestron panels to alert the occupants that there is a visitor. At this point, if audio is in use, the volume will be temporarily lowered and the video distribution system will pause and switch briefly to CCTV. The panels allow two-way communication and can be used to open or close the gate. If the panels are unanswered, the iOS devices will ring so that the family know they have a caller, even when they are not at home.

For peace of mind, the 16 CCTV streams can be viewed individually through the touch panels and Apple devices.

“A Gamechanger for Me and My Clients”