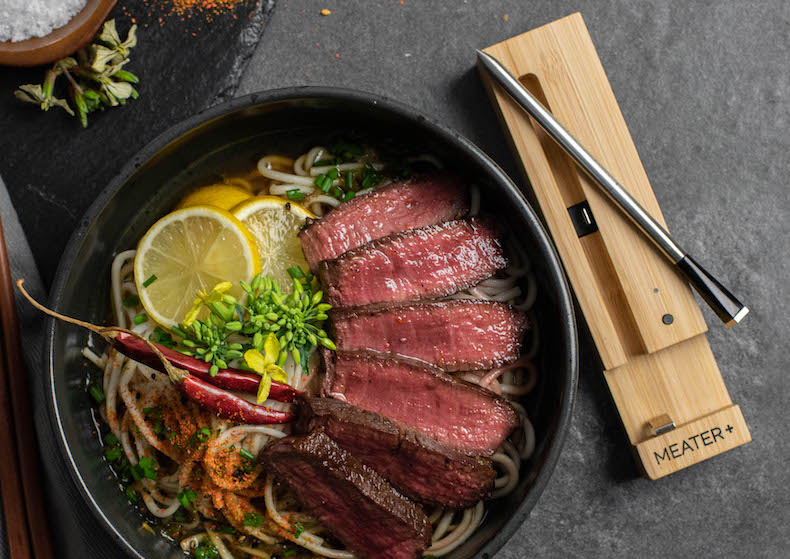 A cooking thermometer is an effective tool for improving your cooking game. First and foremost, undercooking proteins can be a safety issue. Just because it looks properly cooked doesn’t mean it is. Undercooking proteins can fail to kill bacteria and sicken you, your family, and the friends you have invited over for dinner. The U.S. Department of Agriculture has plenty of information on their website here, including recommended safe cooking temperatures.

In addition to food safety, a cooking thermometer takes the guess work out of cooking. There are people that swear they can perfectly judge the doneness of a steak by pressing on it with their finger. Maybe they can and maybe they can’t. But for the rest of us mere mortals, a cooking thermometer is the solution to perfectly cooked steak on the grill, a brisket in the smoker, or even a turkey in the oven for Thanksgiving.

A second type of food thermometer is inserted into the food before you start cooking and continuously monitors the temperature throughout the cooking process. These thermometers either have a cable that connects to a display unit/base station or the connection is made wirelessly.

Several years ago I purchased a Weber iGrill Mini thermometer. It consists of a temperature probe that is connected by a wire to a small base station. The wire is covered with a stainless-steel braid for protection. The base station connects to a smart phone over Bluetooth, and the iGrill smart phone app allows you to monitor the cooking process. The iGrill worked well with one exception; the smart phone had to remain very close to the iGrill’s base station or the connection would drop. This was very frustrating when cooking for guests, as I had to remain right by my grill to assure the food wouldn’t be overcooked.

I was always on the lookout for something that would remove the problem of being handcuffed to my grill while cooking. When I was given the opportunity to try the Meater+ I jumped at it.

The Meater+ by Apption Labs is a true wireless meat thermometer that allows you to monitor the cooking temperature of your food from wherever you want. The temperature probe is inserted into the meat, and it connects wirelessly using Bluetooth, with circuitry in the wooden storage case that the Meater+ is packaged in. The case is both a Bluetooth repeater and charges the temperature probe when it isn’t in use.

Using a second phone, the first phone connects to the Meater case over Bluetooth and the second phone, which you will carry with you to monitor the cooking process, connects to the first phone over Wi-Fi. According to the people at Apption Labs, this will typically extend the range an additional 105 feet. Finally, if you use the Meater cloud service, you can extend connectivity to anywhere you can use your smart phone.

In addition to monitoring the cooking process with a smart phone, the Meater Alexa skill, coupled with the Meater cloud, allows you to ask Meater+ for the temperature, for an estimate of how long before your food is cooked, and more.

Hands-On with the Meater+

The first time you use the Meater smart phone app, it walks you through all the relevant information you need to know to use the Meater+. This includes making sure you’ve enabled notifications and that you’ve fully charged the temperature probe.

The app will also explain that a pushbutton on the case is used to determine if the internal AAA battery needs to be replaced. The battery is used to both power the Bluetooth repeater in the case during use and to charge the temperature probe when it is being stored in the case. An LED on the case signals green if the battery is OK, red if it is weak, and simply won’t light if the battery is dead. During use, the LED also flashes green if the probe is wirelessly connected to the case and flashes red if it disconnects.

The Meater+ doesn’t just monitor the internal temperature of your food. It also includes a second sensor that monitors the temperature of your oven, grill, or smoker. This is an added bonus that can help create the perfect meal. When you are trying to cook something “low and slow” you don’t want the temperature accidentally climbing too high, which could leave you with a tough piece of meat.

Meater+ offers both a complete guided cooking experience as well as the ability to perform a “custom cook.” Because cooking a steak is a multi-step process it is a good example of how the Meater+ guided cooking function can walk you through the process.

Meater+ is best used to reverse sear a steak. Reverse searing involves cooking the steak until the internal temperature reaches the desired level of doneness, resting the steak, and then searing the outside of the steak at very high temperature to develop the Maillard reaction that creates such great flavor. Using a reverse sear makes sense with the Meater+ because it can be damaged by very high heat (the ambient temperature sensor has a limit of 527 degrees Fahrenheit). So, if you seared the steak first, as many people do, you would have to insert the Meater+ after the searing process, which would require handling a hot steak

With a reverse sear, you start by inserting the Meater+ into your uncooked steak. Next use the Meater app to select the type of meat you are cooking and your desired level of doneness. Then place the steak onto the side of your grill setup to provide indirect heat (you could also put it in the oven or a smoker). Using the internal temperature of the meat and the temperature of the air in the grill, the Meater+ will calculate an estimate of the amount of time to cook the steak. At this point you can walk away and do whatever else you need to prepare your meal because five minutes before the steak should be removed from the grill, the Meater app will send you a notification.

When the cooking process is completed, a second notification is sent to your smart phone, Meater recommends that you then place the steak on a wire rack for resting. During the resting process the internal temperature of the meat will continue to rise a few more degrees to the final cooking temperature before it starts to cool. The cooling process causes internal changes in the steak that keeps the juices from all flowing out when you cut the steak for serving.

Normally you would eat the steak when the Meater app notifies you that the resting process (five minutes for a steak) is complete. However, for a reverse sear Meater recommends that you let the steak rest until the internal temperature is 20 degrees below the final cooking temperature (135 degrees Fahrenheit for medium rare). When the internal temperature of the steak has dropped to 115 degrees, remove the Meater+, place the steak on the hot side of your grill for one minute per side (remember to sear the edges too), and serve.

After trying both searing techniques for cooking a steak, I can report that either one will produce a perfectly cooked steak. And, both techniques have their disadvantages and advantages. The reverse searing process allows you to place the Meater+ thermometer at the beginning of the cooking process. If, however, you sear the steak first, then you have to wait until after the searing is complete before inserting the Meater+ or you risk damaging the ambient temperature sensor.

With either searing method, if you follow the Meater app’s guided cooking function and use the Meater+ to monitor the internal temperature of your steak, you are pretty much guaranteed to cook the steak perfectly every time.

Another good place to obtain information about the Meater temperature probe is the Meater web site. Some of the information on the web site includes video instruction on how to use the Meater+ thermometer, including how to setup guided cooking and a selection of instructional cooking videos including how to reverse sear a steak, making oven baked salmon, cooking a whole roasted chicken, smoking a pork butt, and more.

Meater sells two other versions of the Meater temperature probe:

Areas for Improvement for the Meater+

The Meater+ is an excellent product, but there are a couple of ways I think it could be improved.

The Meater+, with its dual temperature sensors, is a very good tool for the home chef. The offers a true guided cooking experience that makes it very easy to use. The extended range offered by the Meater+, compared to the Original Meater, makes it much easier to cook and entertain at the same time.

Some people will miss that there isn’t a way to check the internal temperature of your meat without using the app with either the Meater+ or the Original Meater. However, the fact that it sends notifications both five minutes before as well as when your food is ready makes sure that you don’t run the risk of overcooking your dinner.