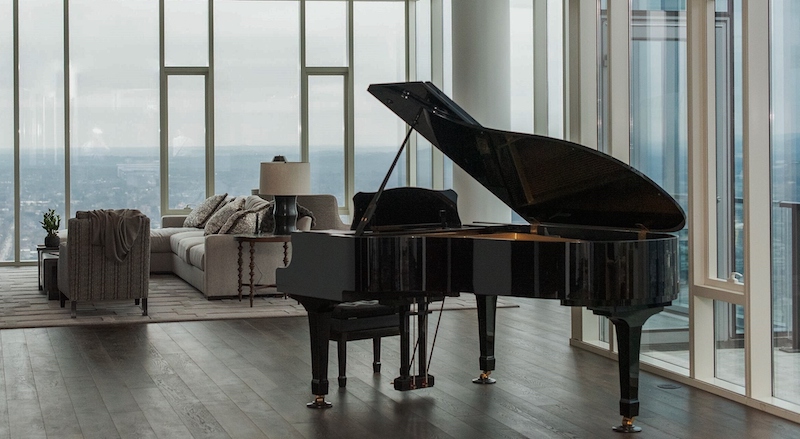 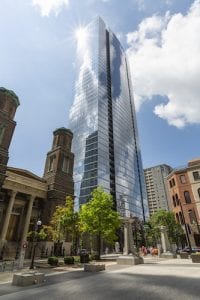 The exterior of 505Church in Nashville

Pro AV Engineering (PAVE LLC) is a Nashville-based technology integration form that was founded in 2003. When developer Tony Giarratana and his team reached out about creating a show home in one of four 45th-floor penthouses within a luxury high rise apartment building in downtown Nashville called The 505, the PAVE team, along with general contractor Trace Ventures, responded with a creative design solution for a state-of-the-art smart audio/video system featuring architectural and custom speakers from James Loudspeaker.

The interior designer in charge of the 4500-square-foot penthouse project was already familiar with James Loudspeaker as a supplier of premium décor-friendly architectural entertainment products, so when PAVE suggested James Loudspeaker Small Aperture series speakers and a custom sound bar for the 85-inch Sony TV, everyone was in agreement about how to achieve best performance while maintaining the clean, modern design ethic of this penthouse project. 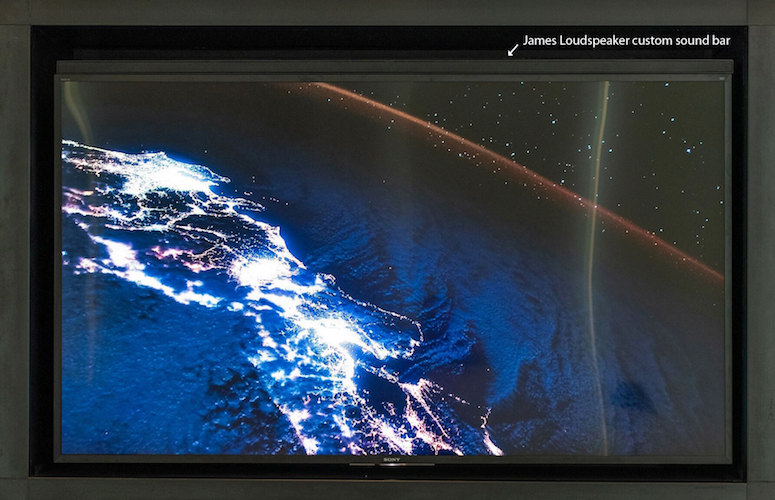 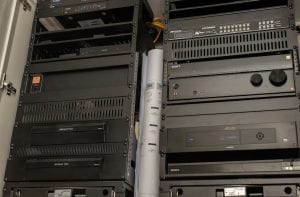 James Loudspeaker accommodated this challenge by custom building a sound bar with a staggeringly compact 1.5-inch height. This is achieved by constructing an L-shaped aluminum enclosure, with the extended rear section of the enclosure accommodating six forward-firing 3-inch woofers and four 2-inch midrange drivers.

The sound from the woofers and mids emit through the narrow 1.5-inch section of the bar, which is all that is visible from the front. The four three-quarter-inch tweeters are housed just behind the 1.5-inch tall grille. This custom LCR sound bar, finished in black to match the Sony TV, showcases the magic of James Loudspeaker engineering and enables integrators to provide clients with the performance they desire without impeding décor. 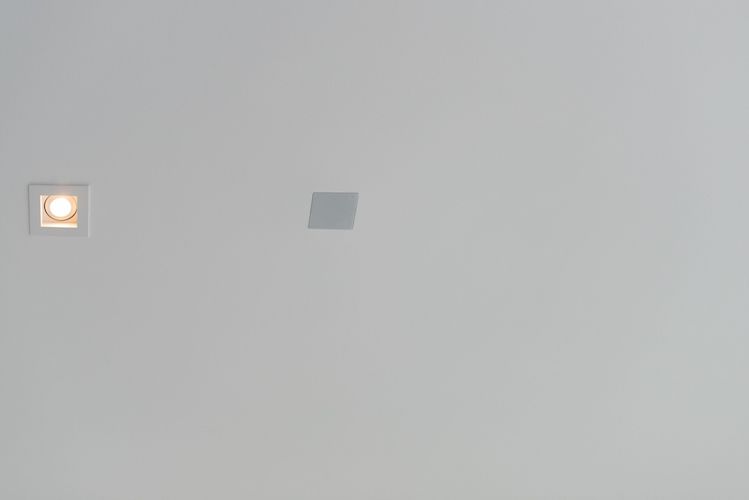 A James Loudspeaker Small Aperture loudspeaker nestled in the ceiling with an LED fixture.

The sound bar, mounted discreetly to the top of the display using custom brackets also designed by James Loudspeaker, is barely visible in the furniture and looks like part of the TV. The living room also features Small Aperture in-ceiling speakers for the surround channels and a Small Aperture in-ceiling subwoofer, generating stunning 7.1 playback from a nearly invisible speaker system that aesthetically matches the LED light fixtures used throughout the space. 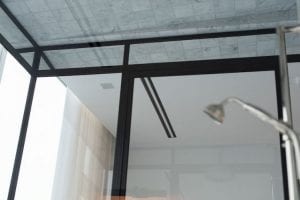 The whole-house entertainment speakers are all James Loudspeaker Small Aperture through the eight zones. The model 63SA-7HO delivers full frequency response with wide dispersion into any room along with extended and detailed bass, eliminating the need for dedicated subwoofers in each zone. Because of their aircraft-grade aluminum enclosure and aluminum driver array, Small Aperture speakers are also ideal for humid environments, such as the master bathroom. The James Loudspeaker Small Aperture speakers play through a tiny 3-inch grille designed to match the elegant square-style LED lighting fixtures. 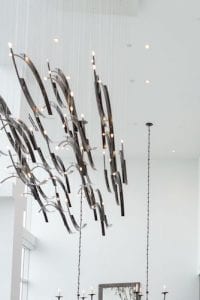 The entire living space within the penthouse features premium entertainment available on demand in each zone. The living room theater system is the only zone that required a subwoofer, and the PAVE team selected a James Loudspeaker Small Aperture (101SA-6) architectural subwoofer mounted to studs in the ceiling. The 101SA-6 features an all-aluminum bandpass enclosure housing a 10-inch woofer mated to an elegant, compact 4-inch grille. The subwoofer is powered by a James Loudspeaker M1000 1000-watt subwoofer amplifier with DSP capability for perfect room calibration. The subwoofer amplifier, surround receiver and smart home electronics are housed in an equipment rack tucked out of sight in the laundry room.

The PAVE team selected a Savant control system for the penthouse, giving residents a highly intuitive user experience when they access their smart home and whole-house entertainment features. Savant IP Audio manages the distribution of music throughout the eight zones, providing robust amplifier power for all of the James Loudspeaker architectural speakers. Savant Music delivers a nearly limitless choice of streaming content, all effortlessly accessed using Savant’s Pro Remote (REM-1000) or one of six dedicated 8-inch touch panels as well as an array of iPhones and iPads running the system. 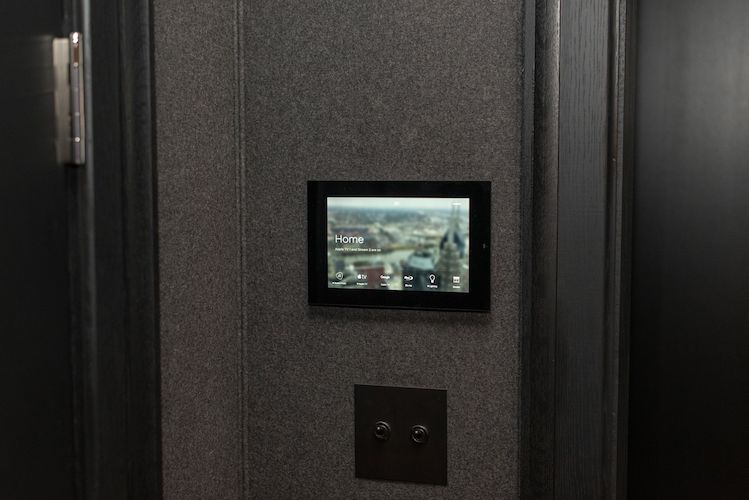 The Savant system also controls four zones of climate with remote sensors, 64-zones of lighting, 60 automated shades, an access control system and more throughout the residence. These technologies are monitored 24/7 using Savant’s SCM (Central Management) system. The entertainment system also features two Apple TVs and a Blu-ray player, with content coming in to the space over Google Fiber.

“James Loudspeaker is a valuable solutions provider for any technology integrator, because when only a custom solution will get the job done, they come through every time,” explained PAVE’s Frank Stafford. “The performance and build quality of the James Loudspeaker sound bar and Small Aperture speakers is second to none; we are thrilled to work with them particularly for discerning clients such as the 505.” 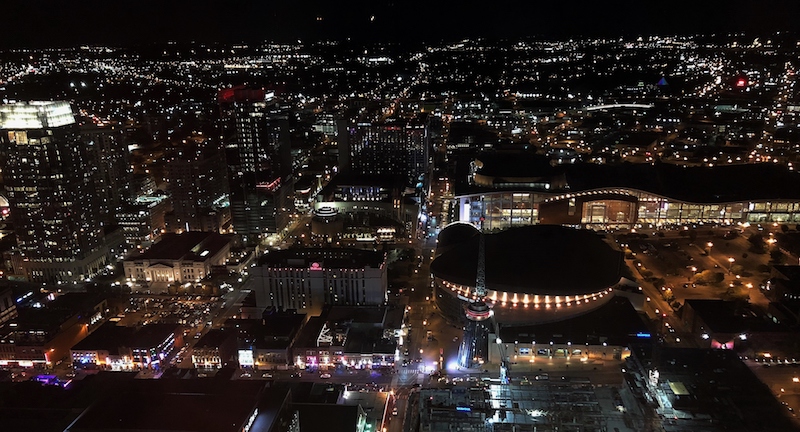 The nighttime view of Nashville, TN, from the 505 penthouse.