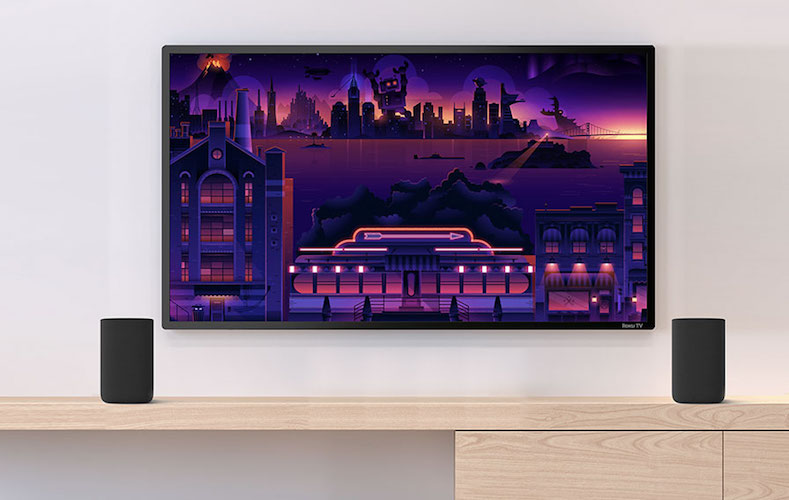 In recent years, soundbars have become a go-to solution for enhancing TV sound where a a surround-sound receiver-based system just won’t work. Connect the audio path to the TV, and you’re good to go. Unfortunately, even they are not always the answer. Particularly with the latest ultra-thin flat panel sets that often sit too low to where they are set down, or when a set is wall-mounted, even a sound bar won’t work.

What to do when you want bookshelf-sized speakers with good audio and an easy connection? One answer for you might be the Roku TV Wireless Speakers. I’ve been living with a pair of them, provided by Roku, for quite a few months, and it’s time to let you in on the secret.

Sitting less than eight inches high and just shy of five inches deep and wide, they can sit beside the TV or easily wall mounted by even the most tool-shy DIY’er. We’ve all heard, and heard of, “wireless speakers,” but these Roku models take that definition to the next step.

Before going into the details of how that works, two important notes are in order. First, as with most “wireless” products, they do connect to the source without wires. However, each of the two speakers does need to be plugged into a standard power outlet. Second, and more importantly, the unique nature of these speakers means that they will only work with Roku TVs. Don’t let that be a deterrent. There are now close to a dozen Roku TV brands offering hundreds of models in all sizes and feature package levels.

However, I’m afraid that the Speakers will NOT work with a standard Roku external streaming device; it must be used with a Roku TV. For the purposes of this review, TCL was kind enough to provide me with a Roku TV to use with the speakers. For those not familiar with TCL, it is a growing power in the TV market. In fact, it is high enough in the sales rankings that the brand often outsells many of the “legacy” TV companies and often places in the top four TV brands in the U.S. TCL uses Roku as the user interface and smart TV system for every TV that they sell, from an inexpensive 28-inch model to a 75-inch set with all the bells and whistles, including QLED, Dolby Vision, and Dolby Atmos. An 8K model from TCL powered by Roku is even on the way.

With those formalities aside, how does all of this work and how does it sound? The answers are easy, and quite well. Setup is simple. Plug in the individual speakers’ AC cords, click through a few menu items to pair the speakers, and you are up and running.

With all control coming through the Roku TV there is no need for a separate remote or second UI, as is often the case with an AVR or soundbar. The audio control options are minimal, but one quickly sees that simplicity is the whole idea here. An example of the Roku/TV integration is the ability to have closed captions appear when the audio is muted.

Of course, all of this doesn’t mean a thing if the sound isn’t good. Hear this: it IS good. Each speaker is a two-way/dual-channel powered (0.75-inch tweeter and 3.5-inch mid/low frequency driver) design. When put to the listening test, they produced more than sufficient, room-filling, loudness with no distortion. Again, with the caveat that this is a two-channel system with no processing or virtualization, the imaging was spot on. In fact, when playing some of the content created in Dolby Atmos, as available in the “Dolby” app on the TCL Roku TV, one obviously didn’t get the fully immersive sound field of a multi-channel system, but for an average sized room the result was very pleasing.

As a comparison, the previous system in the test room was a pair of slightly larger two-way bookshelf speakers from a well-known brand that were fed by a 100wpc AVR. The Roku Speakers sounded as good, or even better on all accounts. Both systems would benefit from a subwoofer, but for all but the deepest bass requirements you won’t miss it.

Looking at the conceit of the Roku Wireless Speakers, it is natural to envision them for us with video content. However, they have another function that in some regards makes the price worthwhile. Using the capability of the TCL TV, one can pair a Bluetooth source such as a phone or tablet for personal music content beyond the music-oriented apps of the TV. As an added bonus, included with the speakers is not only the standard, vertically oriented, Roku Voice Remote, but also a unique “Touch Tabletop Remote.”

Its square, flat, shape is optimized for audio playback by eliminating the direct access controls for streaming video services. As the name implies, that lets if sit on a table so that you don’t need to pick it up to use it. There is also both a mic for issuing voice commands and speaker to play messages confirming back the command’s results. A very clever addition.

Using content from my phone, I put the speakers through their paces with rock, hip-hop, classical, jazz and popular music, all with great results. Two of my favorite tracks for testing Bluetooth speakers is “Organized: LL Star Tribute to the (Hammond) B-3 Organ” and John Coltrane’s classic “A Love Supreme.” With those and others, the performance was as good as many connected speakers at or even above the price here. (OK, but remember that you do need to have the Roku TV, as well.)

When I first encountered the Roku Wireless Speakers I too needed a bit of convincing to be convinced. After using them for an extended period of time using almost every type of video and audio content, I have to admit that, yes, I’m convinced. The total package of wireless connectivity, ease of use for video and music, and the Bluetooth streaming capability makes this a natural addition to the TV. At a retail price of $199, it is well in line with many soundbars and is a great value.

Anything it doesn’t have or do that I would like to see from the Roku Wireless Speakers? Until my last article (posted here) I was going to say that an optional, wireless, subwoofer would be nice, particularly for use with larger sized screens for bigger rooms. The folks at Roku must be reading my mind, as the Roku Wireless Subwoofer, announced this week to accompany with new Roku Smart Soundbar will also work with the Speakers. With that wish granted, anything else? A tribute to the price and performance is that it would be great if there was a way to use the Roku Wireless Speakers with the non-Roku TV sets in the house that are connected to external Roku streaming devices or dongles. Hey, Roku! Are you listening?