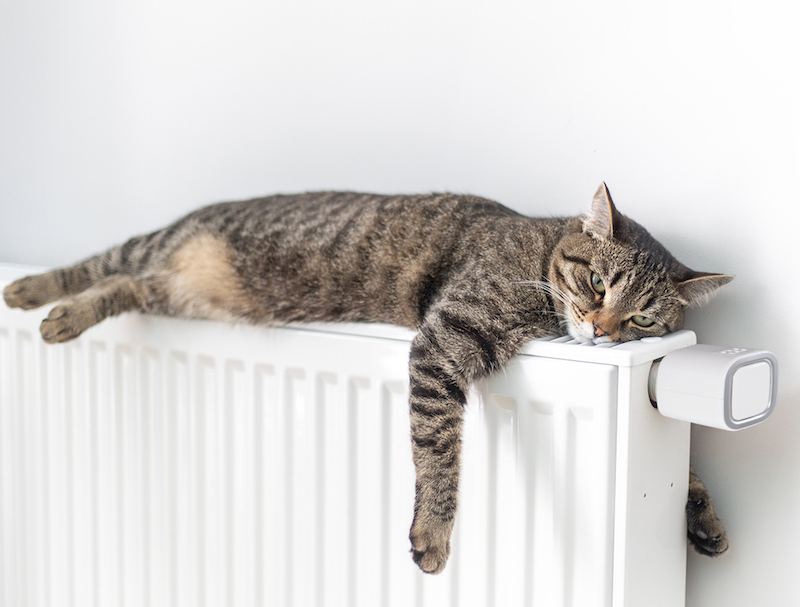 The Shelly TRV is a new addition to Allterco’s evolving home automation brand that promises to open up smart home technology to many homeowners whose houses are heated with radiators.

Radiators have been used to heat homes since the 1880s and continue to be used in new home construction today. In fact, according to the U.S. Department of Energy, “Hot-water radiators are one of the most common heat distribution systems in newer homes, second only to forced-air systems.”

Radiators operate by piping hot water or steam from a central boiler to the radiator. The downside of this system is the challenge of integrating it with smart home technology to better manage energy use in the home. Older systems typically used a centralized thermostat that would trigger the boiler to feed steam or hot water to all the radiators in the home.

There was no ability to create any zoning so the heat could be set back in unoccupied portions of the home. It was also difficult to regulate temperatures in different rooms of a home. Some rooms in a home might be uncomfortably warm while other rooms were uncomfortably cool.

More modern radiators, or older radiators that have been adapted to use them, can be outfitted with individual thermostats that allow steam/hot water to flow to the radiator when the temperature in the room where the radiator is located falls below a predetermined set point. However, even these new radiator thermostats aren’t designed to be integrated into a smart home.

The Shelly TRV is a smart radiator thermostatic valve controller that is compatible with a wide range of radiator valves (a full compatibility list is available here.) It is battery operated and is very energy efficient. Based on a five-month heating season, the Shelly TRV will operate for two years before the internal battery will require recharging.

Shelly built a wide range of features into the TRV, including detailed scheduling profiles that can switch between different schedules for workdays at home, workdays in the office, weekends, vacations, etc.

Integration with other Shelly devices enables the creation of custom scenes or to, for example, set back a boiler when no Shelly TRVs in the home are calling for heat. This can save even more energy along with money on a homeowner’s utility bill.

A child lock feature is included that can optionally disable the use of the physical buttons on the Shelly TRV so a child can’t change the thermostat’s set point.

Shelly includes integration with a wide range of smart home processors/hubs, including Amazon Alexa, Google Home, Smart Things, Home Assistant, and Hubitat, as well as with professional smart home systems such as Crestron (using the Shelly driver I’ve written and published on my GitHub) and Control4 (using the driver developed by Chowmain). They also have a published API and support for the MQTT protocol and an OASIS standard messaging protocol for IoT devices.

Working with the Shelly TRV

While I didn’t have a radiator to test the Shelly TRV with, I was able to connect a Shelly TRV, which was supplied to me by Shelly to evaluate for this article and for development of the Crestron-Shelly driver, to a radiator control valve where it could operate as if it was installed on an actual radiator.

The Shelly TRV is designed to fit most radiator valves, but it also comes with three adapters to increase the range of valves with which it will work. Shelly is developing some additional adapters that will allow the TRV to work with almost any radiator.

Once connected to the homeowner’s network, the Shelly TRV, like other Shelly IoT devices, can both be operated and configured using either the Shelly app or the device’s built-in web interface. The Shelly app also allows a homeowner create scenes for automatic control of cloud connected Shelly devices at predefined hours or based on other parameters like temperature, humidity, light, etc.

The Shelly TRV also includes physical buttons to raise/lower the built-in thermostat’s set point. There is a small display that shows the current temperature and the set point as it is being adjusted. As mentioned above, these buttons can be disabled using the Shelly TRV’s child lock feature.

Shelly takes a unique approach to scheduling with the Shelly TRV. A schedule can consist of up to five unique profiles and each profile can consist of up to 20 temperature changes at different times during the day. So, for example, a homeowner could define a profile for work days at the office where the temperature in the home warms from a night time set back when the homeowners alarm clock is scheduled to go off, cools when they are scheduled to leave for their commute to work, warms up again when they are scheduled to arrive home, and finally cools down when they go to bed. Other schedule profiles could be created for workdays at home, weekends, when a homeowner is away on vacation, and more. Scheduling can also be disabled in which case the Shelly TRV can simply keep the room heated to a specified set point.

If a set point is manually entered when a schedule is running, the new set point will override the schedule until the next time a temperature change is defined in the schedule. This can be very useful if, for instance, a homeowner gets up at different times on different days. For example, if an Alexa device is used as a bedside alarm clock then an IFTTT trigger could be used to warm the house up from its nighttime set back when the alarm clock goes off. Then the schedule profile can take back over later in the day to perform regular changes in temperature in the home.

While Shelly IoT devices can be connected to the Shelly cloud, they also include the ability to be fully controlled using http commands sent directly from another device on the homeowner’s network and operate independently of the internet. This ability assures that Shelly devices, including the Shelly TRV, don’t become dumb during an Internet, or cloud service, outage.

The Shelly TRV is going to open up smart home technology to many homeowners whose houses are heated with radiators. This is especially true for people who own older homes. These people can now take advantage of the energy savings and convenience offered by smart home technology.