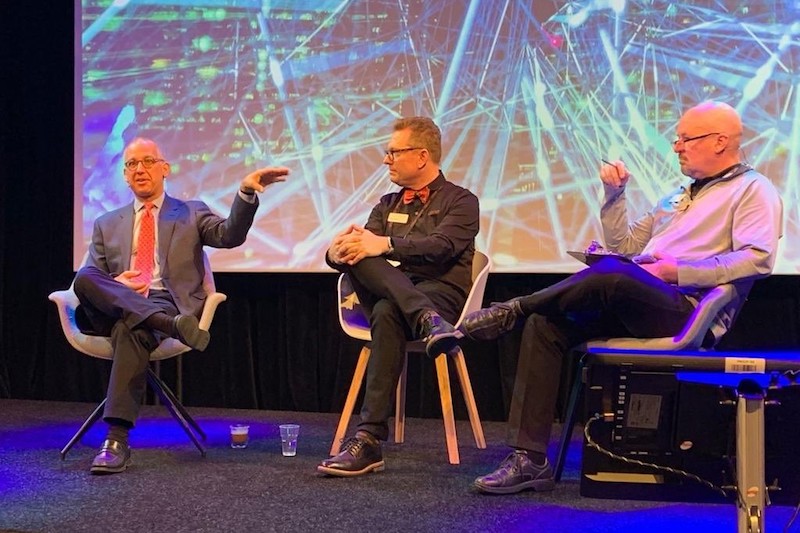 The choices are overwhelming: streams, services, devices – the range of available content is staggering, and the ability of the average consumer to sort it all out is likely past its limits. Geoff Meads (Presto AV) and John Penney (who’s been a strategy officer for some of the biggest names in content delivery) understand the challenges here, and they both see a terrific opportunity.

In a class – well, more of an open discussion – titled, “The Future of Entertainment: Content, Distribution, and the Consumer,” presented at ISE 2020, Meads and Penney ticked off the issues for a attendees who hailed from around the globe: Michigan, Cyprus, Belgium, and so on.

Moderator Walt Zerbe summed up the issue simply: “I’m a Star Trek fan, and there’s a new Picard series. It’s only on CBS all Access. I don’t have that.” Does he want that service – really? For how long? “Suddenly, my life was a bit more complicated.” A minor inconvenience for a single show, to be sure; but one that’s repeated – even multiplied – seemingly on a daily basis.

“Remember the days when you’d walk into a client’s home and they’d have five, six, seven remotes sitting on the coffee table? One for every device, every cable box?” Meads said. “It feels like we’re back to that place in some way.”

Compounding that issue, for example, is the fact that TV manufacturers – facing ever narrowing margins – want to build ecosystems that manage your entire experience. The consumer, meanwhile, faced with a dizzying array of options and hardware, has difficulty sorting it all out. The average user likely can’t even differentiate between 1080p and 4K content. “If someone owns a 4K TV,” Meads said, “they think they’re watching nothing but 4K content.”

“If you brought a client on to the floor of a show like ISE, they’d swear we were all speaking Klingon,” he added.

Penney is quick to note that there’s another wrinkle in all of this. There’s a sameness to the bulk of Big Hollywood productions, and that’s by design. “We see remakes because they’re safe bets. Every few years the studios can make a new Spiderman movie with better special effects.” The economics here are staggering: It costs Disney $200 million to make, and the another $200 million to market a film (and that’s part of the reason that merchandising is key).

“Movie production is a ‘barbell’ industry,” Penney said. “Productions are either extremely costly or very cheap. Lower-cost productions don’t need to go into a theater – they can be marketed directly to the consumer.” Couple that with the way people consume content (made possible by all of our dazzling gadgetry), and you’ve created a recipe for the demise of “broadcasting” as we know it. “The idea used to be ‘one speaking to many’,” Meads said, “and now we have many speaking to many.”

The upside for an integrator lies in their knowledge and expertise when it comes to what’s delivered where, and in what format.

“If one thinks about perhaps rearranging their workforce, for example, so that a single employee is expert in this field, think about what resource that person becomes,” Penney mused.

Penney’s bullish on the idea of the technology integrator as a “content concierge,” an idea that’s been echoed in CEDIA podcasts by Michael Heiss and Rich Green.

“There are people who are willing to pay top dollar to get the content to the family in as frictionless a manner as possible,” said Green in an interview. “Imagine an RMR proposition that provides a consultant – you – monthly or quarterly, curating the best experience, one that’s tailored to that home.”

And all this content (and its attendant devices) isn’t going away anytime soon. “The future will be the same,” Penney said, “only more so.”