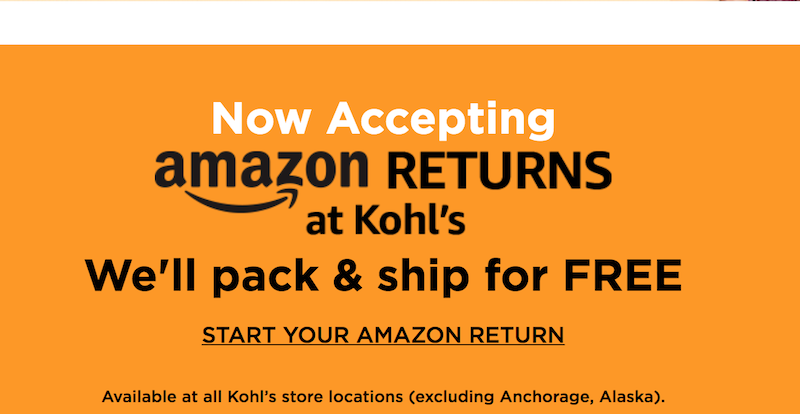 For my July birthday, I had asked for some fancy new kitchen utensils for my newly remodeled kitchen. My 12-year-old daughter worked with my husband to get me a set using our Amazon account.  After a few days of enjoying my gift, a second of the same set showed up on my doorstep by mistake. Oops!

I have not returned many items to Amazon and was dreading the process. As I clicked through the site, there was an option to return to my local Kohls store. Interesting, I thought, but why not? No box or bag to find, no line at the post office, no printing a tag and making sure my printer had ink.

The next day my two girls and I piled in the car to run errands, including our stop to Kohls, a store I had not set foot in for over a year. As I walked in the main doors, there was a bright orange kiosk with a friendly young man who scanned the bar code I provided as we chatted about the convenience. The entire interaction took less than five minutes.

Then, he handed me a discount code for 25-percent off. That’s when my kids reminded me that we need to start school shopping. Well played Kohls and Amazon. Well played.

On our tight errand schedule, we ended up spending most of our time inside the retail store with the girls thrilled to try on backpacks and, not surprisingly, we walked out with a bag full of merchandise. “Did you find everything you were looking for?” asked the sales lady upon checkout. “As I was not looking for anything, I will go with yes,” I chimed.

In today’s world of bankrupt retail stores, I cannot help but think this a brilliant ploy on behalf of the two companies.

Kohls’ CEO Michelle Gass calls this the “single biggest initiative” of the year as they roll this convenience out to over 1,100 stores across the country. The retailer will pack, label, and ship the returns for free, and that makes life a bit easier, who does not want that?

There is no doubt the internet continues to change our shopping habits. Last year my tech integration company decided to move to an appointment-only business for this reason.

According to the New York Times, less than halfway through April of this year, American retailers had announced plans to shut 5,994 stores during the year, exceeding the 5,854 announced in all of 2018. This past June, Payless closed its last remaining U.S. stores and according to USA Today, UBS analysts said 75,000 more stores would need to be shuttered by 2026, if e-commerce penetration rises to 25 percent from its current level of 16.

So, what is a retailer to do? Be creative. This partnership goes a long way to make the return easier for Amazon while getting people in the door at Kohls. There is no doubt that we, the buyer, still have the desire to touch and try on clothing, shoes, and the like. With so many of our favorite stores closing their doors, this has become a difficult task.

Perhaps next we will see the ability for a store to know you are on the way, and they can prepare a dressing room using your algorithm of your past purchases. Or will we see a space with multiple stores from which to choose your outfit? Whatever it is, I expect to see more partnerships like this one, and I look forward to it!