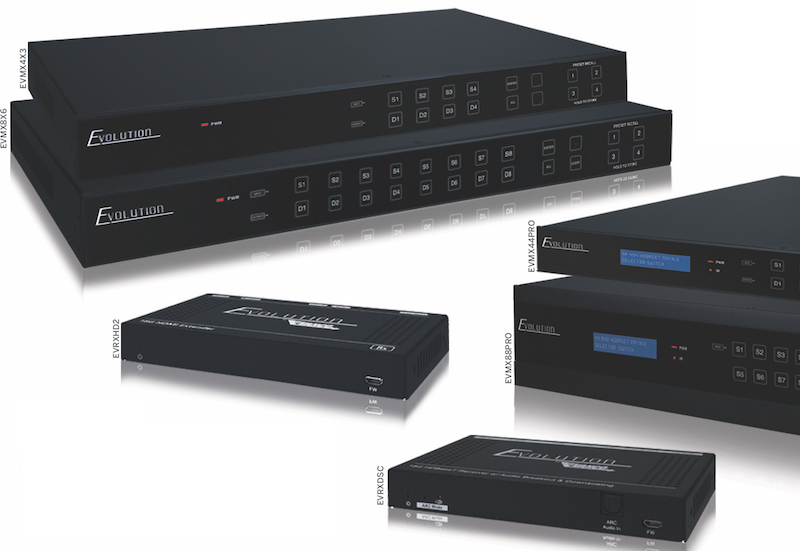 The line of matrices includes four new models all featuring 4K@60Hz, 4:4:4, and HDR. A variety of distribution products work together to support various functions and price points, a benefit to distributors and dealers alike who are seeking targeted, handpicked, and curated products for 4K installations.

The Evolution EVMX4X3 expands on previous matrix switch models with the capability of four HDMI sources to be distributed to up to four displays simultaneously, with three of the outputs over Cat6 using HDBaseT transmission and one output over HDMI with analog and digital audio outputs

The Evolution EVMX44PRO increases the total number of outputs and offers the ability to send any HDMI audio input or ARC to up to four zones using digital optical outputs. It allows four HDMI sources to be distributed to up to four displays simultaneously, with mirrored HDMI outputs for a total of eight outputs.

The Evolution EVMX8X6 offers eight HDMI sources to be distributed to up to eight displays simultaneously, with six of the outputs over Cat6 using HDBaseT transmission and two outputs over HDMI with analog and digital audio outputs.

The Evolution EVMX88PRO offers the most significant distribution options out of the entire line. It allows eight HDMI sources to be distributed to up to eight displays simultaneously, with mirrored HDMI outputs for a total of 16 outputs. The EVMX88PRO also features the ability to send any HDMI audio input or ARC to up to eight zones using digital optical outputs.

Also new to the Evolution line is a new series of Evolution 4K HDR HDBaseT Receivers, consisting of two models, that can be mixed and matched with compatible Evolution matrix units, resulting in a flexible and modular matrix switching system for any application.

The Evolution EVRXHD2 receiver with POC and bi-directional IR, allows extension of 4K@60Hz, 4:4:4 Chroma Subsampling, and HDR up to 131ft/40m and 1080p up to 230ft/70m over a single Cat6 cable. PoC (Power over Cable) allows the EVRXHD2 to be powered over Cat6 from the matrix unit. For projects that need more options for audio, control, and scaling ability, the EVRXDSC receiver has all the same features as the EVRXHD2 plus more, including RS-232 pass-through, ARC, audio extraction, and downscaling.

“As we looked into developing the next series of Evolution matrix switches and receivers, we were determined to provide a line for full 4K AV distribution that accommodated ARC, audio routing, and scaling for more complex residential or commercial applications,” said Brandon White, director of product development, Vanco International. “With the release of this new line, there is no need to pay more for features that will go unused, and the updated matrix programs, providing the installer with the flexibility to tailor to the needs and budgets of their projects as needed for their customers.”