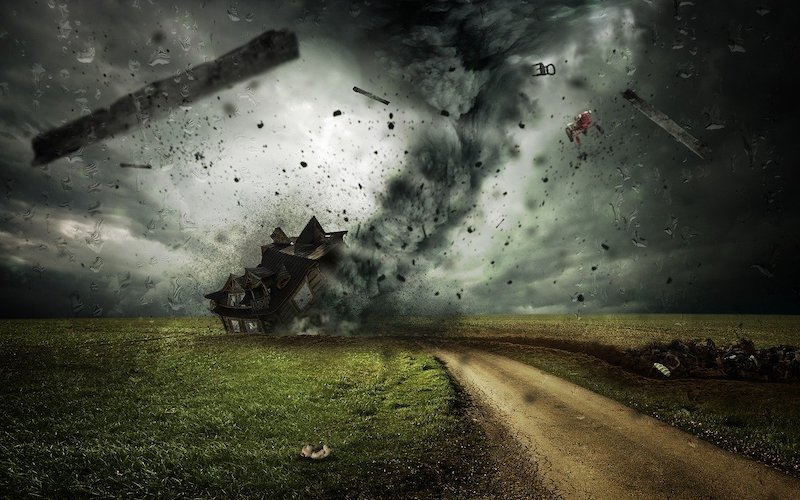 Image by Jonny Lindner from Pixabay

Natural disasters and small-scale personal emergencies are equal-opportunity destroyers. Tornadoes and hurricanes, for example, don’t care who or what you are as long as you’re in their path of mayhem and misery. Nor does a cellphone battery that dies as you’re making a life-saving 911 call.

Here’s more cheerful information regarding disasters: the U.S. Department of Homeland Security (DHS) would like you to know that, “After an emergency, you may need to survive on your own for several days. Being prepared means having your own food, water, and other supplies to last for at least 72 hours.” (Oh, joy…)

Big catastrophes and local emergencies typically happen with little-to-no warning. That’s why the DHS, FEMA, Red Cross, and just about every other organization that deals with such situations recommend putting together a basic disaster supply kit containing the essential items that you may need in the event of an emergency. While there’s no way to prepare for every eventuality, here’s a list of some high-tech (and some not-so-high-tech) gear to consider calmly getting your hands on today so you’ll be prepared if things get crazy tomorrow.

After packing food, water, a first aid kit, and a manual can opener, drop a cellphone charger and a backup battery in your kit. Keeping your smartphone charged will be absolutely essential, because even if you can’t get a signal strong enough to make a call, you can still use apps (assuming you’ve previously downloaded them) from FEMA, the Red Cross, and others for first aid advice and other survival information.

Although it may be tempting, don’t assume you’ll be able to rely on your phone as a flashlight or to receive Wireless Emergency Alerts (WEA) from the National Weather Service (NWS) or your local, state, or federal government agencies. Instead, follow the DHS recommendation that your disaster kit includes a separate flashlight (with extra batteries) and a battery-powered or hand-crank NOAA Weather Radio with tone alert.

Of course, not all flashlights are created equal. The JumpSmart ($159.95), for example, combines a 330 Lumen flashlight, a 37,000 mWh jump starter (powerful enough to jump start 8-cylinder, 5.0L gas or 2.0L diesel engines), and a 2.4A output for charging USB devices together and encases it all in a hefty, anodized-aluminum, cylindrical casing. The 495-foot reach flashlight includes high, low, SOS, and strobe modes; and the detachable Smart Jumper Cables have audible alarms and visual safety indicator lights that warn if you’re making improper or dangerous connections—something that can easily happen in stressful survival situations.

Kaito Electronics’ KA500 ($49.95) won’t jumpstart your car, but this portable radio will keep you alerted to severe weather conditions in the area with its built-in NOAA Alert function. The KA500 can also receive broadcasts from AM, FM, short wave, and seven pre-programmed NOAA weather stations. It includes a five-LED flashlight/reading lamp and a USB port for charging other devices. The built-in Ni-MH battery pack can be recharged using the unit’s dynamo hand crank, a standard USB charger, or the unit’s 180-degree adjustable solar panel. The KA500 can also be powered by three AA batteries or an optional AC adapter.

The DHS recommends that your disaster supplies kit includes at least one gallon of water per person per day for at least three days to be used for drinking and sanitation – but that’s a bare minimum. Unfortunately, until somebody invents a powdered alternative, liquid water is bulky, heavy, and cumbersome to transport, especially if you’re traveling or with a group. The Platypus GravityWorks 2.0L Complete Kit ($99.95) is a pump-free, ultralight system that can filter up to 1.5 liters of water a minute. That’s enough filtered water, the company estimates, for up to four people “on backpacking, hiking, and backcountry trips.” (That’s one way to keep your sanity during a disaster. Tell yourself it’s a spur-of-the-moment camping trip…)

After filtration, you can kill any gut-busting stuff that might remain with the help of the Steripen Ultra UV water purifier ($109.95). Steripen says that the easily carried handheld device emits ultraviolet (UV-C) light rays that can “safely purify clear water by destroying 99.9 percent of protozoa (including Giardia and Cryptosporidia), bacteria, and even viruses.” The small OLED screen on the front of the Steripen Ultra UV even lights up with a smile to let you know the water is safe to drink. The built-in UV lamp is designed for up to 8,000 treatments, and the Steripen Ultra internal lithium battery can be recharged from any standard USB power source.

At first glance, it’s doubtful something called a “smart mug” would find its way onto anyone’s list of useful survival tech gear. Yet, although the Cauldryn Fyre Mobile 2.0 Smart Mug ($149.99) looks like a souped-up insulated travel tumbler with its built-in LCD screen that displays the internal temperature and up/down adjustment buttons, it’s actually a mobile, modular, personal survival kitchen. The basic unit includes a rechargeable battery and a removable (for easy cleaning) heating element that can keep the Cauldryn Fyre Mobile 2.0’s contents anywhere between room temperature and boiling for up to 20 hours. The company says the smart mug’s ideal uses include: “Keep coffee hot, brew coffee and tea, cook freeze-dried food, sterilize water, charge devices, heat soup, boil water.” The optional Cauldryn Blender Attachment ($39.99) is strong enough to crush ice (if you’re lucky enough to find any). An optional Vehicle Base ($9.99) lets you recharge the Fyre Mobile 2.0 from a 12-volt outlet.

LOKSAK’s aLOKSAK flexible, re-sealable storage bags (starting at $8.49 for a 2-pack of 3×6-inch bags) offer 100 percent protection of the contents – including firearms or electronics like phones, tablets, and flash drives – from water (depths of up to 200 ft), dust, humidity, sand, snow, and most other things Mother Nature can throw at them. Even more impressive, touchscreen devices work while contained in aLOKSAK bags, including making and receiving cellphone calls. LOKSAK’s OPSAK bags (starting at $9.49 for a 2-pack of 7×7-inch bags) are similar, except they’re specially designed for food storage and preparation in less-than-ideal situations. Each re-sealable OPSAK bag is made from BPA-free, FDA- and NSF-approved food-safe materials and can withstand direct heat up to 170 degrees (F). That means you can pour boiling water straight into an OPSAK bag to rehydrate food or make hot beverages. In additional to being washable, they’re odor-proof—so food stored in an OPSAK bag won’t attract wildlife (or, in a seriously apocalyptic scenario, other humans). They can also be used to transport body waste (diapers, for example, or worse…) without the accompanying stench or possibility of spreading disease.

Make Sure You Can Still Cook

You can take your survival cooking to the next level with BioLite’s CampStove 2 Bundle ($239.95). In addition to letting you grill, boil, and cook using sticks, wood scraps, pellets, pinecones, or other biomass as fuel, the CampStove 2 can generate 3W of electricity from the heat of the fire to charge devices in real-time or store the energy in the unit’s onboard 2600mAh backup battery. The included KettlePot can boil one liter of water in less than five minutes, and the Grilltop fits up to four hamburgers (or other, um, meat patties…). The company’s Energy Bundle+ ($439.65) includes everything in the CampStove 2 Bundle and adds a five-watt solar panel with a built-in 2200mAh storage battery, and an extensive multifunctional lighting package incorporating a dimmable flashlight, a lantern, packable overhead lighting, and a 4400mAh rechargeable battery pack.

As long as the sun is shining, you don’t have to pick up sticks or find other fuel to cook with the GoSun Go Portable Solar Cooker. Using two parabolic reflectors, the Go concentrates energy from the sun on an evacuated glass tube containing a slide-out stainless-steel cooking tray. It’s so efficient at capturing and retaining heat that the Go can boil water or cook “most meals” in 20-30 minutes. In full sunlight, the Go can reach temperatures up to 550 degrees (F); but GoSun says the Go will cook without blazing sunshine as long as “you can see a defined shadow.” By the end of the year, GoSun expects to be shipping the GoSun Chill + Flex ($949.00) package.

The Chill is a 40-liter capacity, battery-powered, portable fridge that can maintain its internal temperature anywhere from -4 to 68 degrees (F). The Chill’s built-in 144WH PowerBank can also be used to charge phones and laptops. The unique Flex is a folding table with a solar panel integrated into one half of the table’s surface. The configuration is incredibly clever because while the solar panel is charging the Chill, the other half of the Flex’s top surface can be used to prepare food. At the same time, the Flex can provide a nice bit of shade for the Chill, making it even more efficient.

No disaster supplies kit is complete without some method of starting a fire, be it a waterproof container of matches, a magnesium fire starter kit, or a primitive bow drill fire starting kit (not recommended, by the way, unless you plan on freezing to death). Ultimate Survival Technologies (UST) suggests packing one of the company’s TekFire Charge Fuel-Free Lighter. Unlike traditional lighters, it doesn’t require butane fuel, nor does it need adjustments for altitude. The electronic design is flameless and windproof, while the internal 3000mAh lithium-ion battery can also be used to charge other devices. The lighter includes a ParaTinder Utility Cord that initially functions as a wrist lanyard but can be unwound to
access a special, easy-to-ignite tinder thread woven inside.

The primary focus of the survival tech gear listed so far is to keep you alive during an emergency. After the disaster, assuming civilization hasn’t collapsed, you’re going to want to begin putting your previous life back together again. With that in mind, both FEMA and the CFPB (Consumer Financial Protection Bureau) recommend that you save essential family documents – such as copies of insurance policies, personal identification, and bank account records – either electronically or in a waterproof, portable container.

You could save electronic copies on your phone and back them up using a cloud storage service provider, but what if your phone gets destroyed and the cloud service is affected by the same disaster? You might also want to keep copies of those vital files on one of Corsair’s Flash Survivor Stealth USB 3.0 flash drives. Available in storage capacities up to 256 GB ($64.99), these super-tough flash drives include an anodized, aircraft-grade aluminum housing that’s waterproof to 200 meters and is both vibration- and shock-resistant up to 40Gs, providing what the company calls “adventure-proof data transport” capability.

Ideally, you’ll never be forced to rely on any of these devices to keep yourself and your loved ones alive during a long-term emergency. Having one or more of them on hand, though, is a good insurance policy in case Mother Nature gets out of hand. And, unlike with most insurance policies, you might find yourself using some of these devices – especially if you’re the outdoorsy type – a couple of times a year.