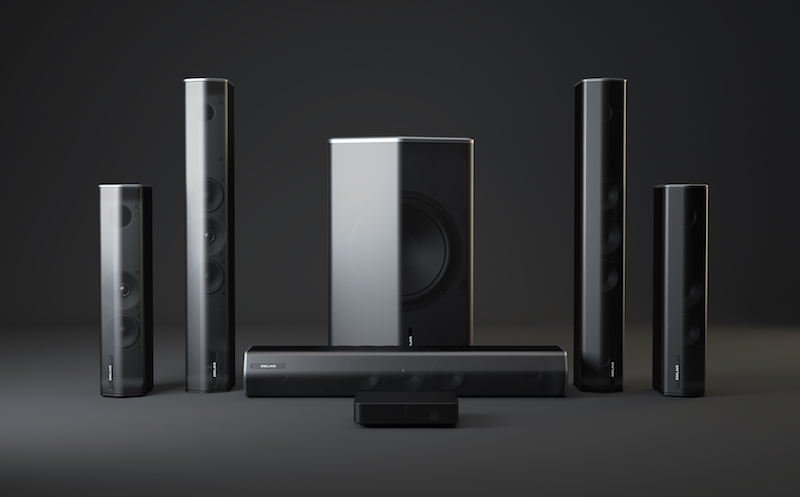 It goes without saying that the entertainment landscape has changed quite a bit over the past few years. While some of us in the old guard are still clinging to multiple source devices for our day-to-day entertainment – disc players, satellite boxes, dedicated media streamers, etc. – most folks are perfectly content with the incredible wealth of content available from nothing more than the apps built into their smart TVs. And it makes sense that many of those people just don’t see much benefit in hooking up an AV receiver or preamp and running speaker wires all over the place in the quest for an elevated sound experience, especially given how good soundbars have gotten as of late.

But now there’s a better sound solution aimed directly at those people. One that offers genuine surround sound rather than surround sound-ish digital signal processing. One that’s, quite frankly, barely more difficult to install and configure, and just as easy to control, as the most basic of soundbars. That solution? Enclave Audio’s $1,649.98, 5.1-channel, THX-certified CineHome PRO CineHub Edition wireless speaker system.

The CineHome PRO system comes packed in one reasonably manageable box that’s quite a bit bulkier than the packaging for most soundbars, but with good reason. Contained within the packaging is five satellite speakers (front left, right, and center, as well as two surround speakers and a subwoofer), all individually wrapped in protective cloth. And if you opt for the CineHub Edition, that little connectivity hub is cradled right on top, making it the first thing you encounter when you slice the tape on the top of the box.

The CineHub, by the way, is going to be a necessity for most people, since it serves not only as home base for all of the speakers (the system relies on WiSA wireless technology to remove speaker cables from the equation), but also the point of connectivity for the rest of a complete AV system. All told, CineHub includes one HDMI eARC connection, one optical digital connection, an auxiliary 3.5mm audio input, and a Bluetooth 5.0 wireless antenna.

Also, at the top of the box is a little package containing a quick start guide, a more in-depth instruction manual, and enough power cords to connect the entire system.  Digging deeper into the box, each of the main speakers is individually labeled, so there’s no real confusion about which is the front left and which is the rear surround.

Setting up and configuring the CineHome PRO CineHub Edition system is easy, although not necessarily intuitive the first time around. In other words, the quick-start guide is pretty essential even if you know how to set up a full component home theater system. The first step is to place all of the speakers, and the documentation included in the packaging gives some very helpful advice on that front. Each speaker also includes keyholes, should you want to wall-mount them. Since the speakers’ ports are on the front instead of the rear, wall-mounting doesn’t significantly impact sonic performance, in my experience.

Once the speakers are in place, either on the wall or on shelving or your credenza, you power on all of the speakers, then connect the hub to power. From there, everything is done from within the Enclave Remote mobile app. The app runs you through some basic distance and delay calibration for each speaker in the system, and provides white noise (which you turn on and off by simply tapping on each speaker) so you can use an SPL meter to get the balance dialed in.

There are some limitations in terms of speaker setup, mostly the fact that distances can only be set to one-foot precision, which may mean that those in smaller rooms won’t be able to adjust delays perfectly. The subwoofer also lacks some basic controls, like variable phase settings, which may make it difficult to perfectly integrate the sub with the satellite speakers. Of course, given that the system is self-contained, there’s no need for some other common settings, such as crossovers.

Given the lack of phase settings, you may find that you need to tinker with the positioning of the sub or subs (the system can accommodate up to four) just to make sure there aren’t any audible gaps between the top end of the sub’s output and the bottom end of the main speakers’ output. But other than that, there’s really not much else to mention in terms of setup. Simply connect the HDMI/eARC port of the CineHub to the equivalent port on your TV, make sure your TV is outputting bitstream audio instead of PCM if that’s an option, add the CineHub to the list of Bluetooth connected devices on your smartphone or other portable media player, and you’re done.

Yes, But How Does It Sound?

Perhaps the most surprising thing about the CineHome PRO CineHub Edition system isn’t its WiSA wireless connectivity, its simple setup, or its relatively economical sticker price. It’s the fact that, when you get right down to it, the system sounds pretty great. Not “great for a wireless system.” Not “great as a soundbar substitute.” Simply great, full stop.

When you get right down to it, this system sounds like a component surround sound home theater system. I spent a good bit of timing digging through my Vudu movie library via the app built into my smart TV and couldn’t really find any movies that the Enclave system struggled to deliver with excellent impact. Everything from Spider-Man: Into the Spider-Verse to The Fate of the Furious came through with shocking authority, wonderful clarity, excellent soundstage and imaging, and dialogue intelligibility on par with dedicated center speakers that’ll set you back more than half of what this entire system costs.

Spider-Man: Into the Spider-Verse has this peculiar mixing quirk whereby the opening narration by Peter Parker is spread across the entire front soundstage instead of merely the center channel. The Enclave system replicates that perfectly. The film also has a lot of wonderfully deep bass, which I expected the Enclave subwoofer to struggle with (and indeed, I would have forgiven if it if did). The system manages to crank out some deliciously deep and impactful bass all the way down to the neighborhood of 25 Hz, though, far deeper than you’d get from almost any sub packed in with a soundbar. It’s true, you may hear some resonance in the 100 Hz range, depending on where the sub is located and the overall frequency balance of what you’re currently listening to, but that’s a pretty nitpicking observation.

While we’re picking nits, you also could fault the speakers for not having perfectly flat frequency response, as there’s some recessing in the upper bass/lower midrange, and a bit of a peak in the upper midrange. And things get a bit wibbly-wobbly from 10kHz or so on up. Off-axis performance doesn’t roll off quite as gracefully as I’ve heard with better passive speakers in this price range, either. But it’s telling that I’m inclined to compare these active, wireless speakers to better passive, standalone speakers in their price class, instead of roughly equivalent soundbar systems.

And even making that comparison, I think the Enclave system still shines bright. So much so that if I didn’t have to use my bedroom as a revolving door test bed for AV receivers, I would be more than happy to simply plug this system in and be done with component sound systems in that room altogether.

Is it in danger of replacing the fully decked out, 12,800-watt, $30,000 component sound system in my main media room? No, it’s not. But then again, it isn’t intended to. Perhaps the best thing I can say about the Enclave Audio CineHome PRO CineHub Edition system s that it makes legitimate surround sound viable for people who simply don’t want to fuss with preamps and amps and all manner of other black boxes, not to mention additional remote controls. The Enclave system operates perfectly fine with your TV’s remote, meaning that all you really need to do with the companion mobile app after setup is switch to the Bluetooth input when you want to rock some wireless tunes.

Speaking of tunes, I was also rather surprised by the CineHome PRO system’s performance with two-channel music. Dig deep into the setup menus of the app and you’ll find settings for Dolby Pro Logic II, which engages when you feed the system a two-channel signal. You have your choice of Movie, Music, or Auto. Back up the home page of the app, though, and there’s another setting, dubbed Party Mode, that’s similar to the All Channel Stereo mode you’ll find on most AV receivers.

Honestly, though, when listening to music, I found myself preferring just straight-up stereo. Since the front left and right speakers aren’t locked in one cabinet the way they are with a soundbar, you can spread them out and enjoy a wonderfully wide soundstage that benefits music even more than movies, in my opinion.

The system is also capable of positively peeling the face right off your skull if you’re not careful with the volume controls. At one point, while cranking a playlist including George Michael’s “Freedom! ‘90” and Sly & the Family Stone’s “Dance to the Music,” I found my ears giving out long before the Enclave system showed signs of strain (except, again, a little bit of resonance in the subwoofer).

Of course, not everyone has an up-to-date smart TV, so those who rely on something like a Roku Stick plugged into the back of their display may need to check and make sure the TV will output 5.1 audio from connected HDMI sources. Not all do. Many TVs downmix any incoming audio signal to two-channel before passing it along via ARC. The Enclave system will still apply Dolby processing to bring this two-channel audio into the surround sound domain, but it’s not as effective as discreet 5.1 sound.

Another thing to consider is that, while thin, the front left and right speakers for the CineHome PRO are tall. Really tall. Like, over two feet tall. That may be a little overwhelming for some folks, especially if they opt for shelf-placement instead of wall-mounting. In that respect, the smaller CineHome II system may be preferable for some people.

When you get right down to it, any minor quibbles I have with the Enclave Audio CineHome PRO system are just that. It’s frankly quite amazing the level of performance this system delivers, especially for the money. You could easily drop $1,000 on an AV receiver and another $1,000 on a 5.1 speaker system and still not have the same overall level of sonic performance this wireless system delivers. True, it’s not intended for those who still rely on a rackful of source devices, nor those who like to tinker with room correction or EQ or dial in the Nth degree of delays and crossovers and such. But all things considered, taking into account what this system does and its intended audience, it gets a huge thumbs up from me.