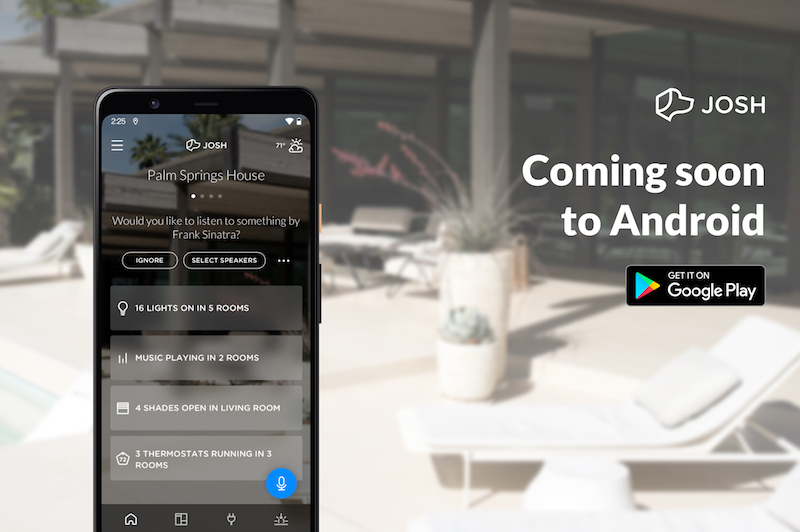 During this week’s virtual CEDIA Expo 2020 conference, Josh.ai is announcing several new features and integrations that represent the culmination of feedback from its network of more than 500 certified dealers. At the heart of the updates is a new web portal interface, Fiji OS, that allows dealers of the voice-based home automation platform to configure advanced conditional macros using nothing but simple text.

“Our mission at Josh.ai is to make truly delightful experiences that don’t sacrifice on privacy or quality,” stated Josh.ai CEO Alex Capecelatro. “The rollout of our new web portal interface, Fiji OS, represents the most intuitive, full-featured configuration tool we’ve seen in the industry. For the first time, dealers can configure advanced conditional macros using nothing but simple text. While we’re always excited about delivering award-winning hardware and client-facing interfaces, we believe our continued investment in dealer tools will be paramount in offering control that is easy to properly deploy.” 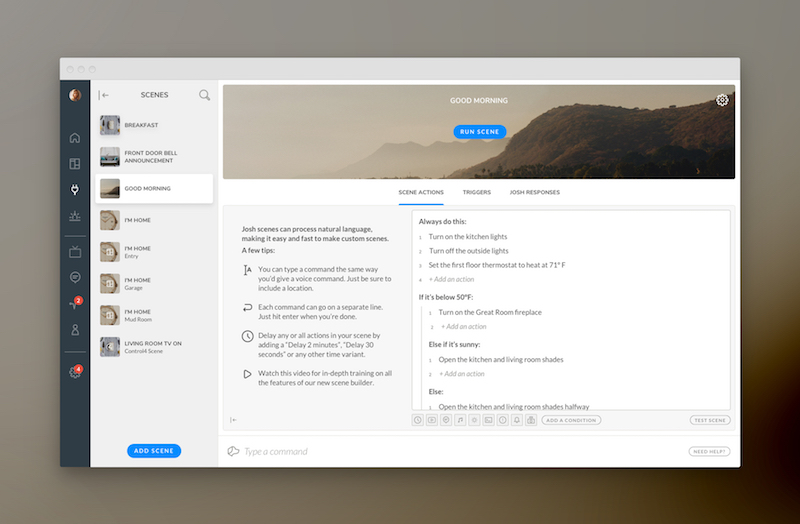 Fiji OS represents a complete redesign of Josh.ai’s configuration portal with homeowner utilization and friendly customization tools in mind. The new platform implements new user roles and permissions structures for granular privacy settings, IR configuration of set top boxes for channel access and navigation of non-native video sources, an intuitive new portal layout, and a Natural Language Scene Editor that will transform how systems are programmed going forward. As of CEDIA, the Fiji update has been pushed to all active Josh.ai systems and will be the standard going forward, at no additional charge.

Josh.ai’s software has always been programmable to accept variations of device and room names as well as triggers to activate scenes, and now Fiji OS introduces natural language to the programming of the system itself. Clients can now simply speak or type out what they want a scene to do. No complex programming, no complicated GUI console, and no configuring tiles. All that is needed is natural speech to create custom scenes. For example, a user can create a “Good Morning” scene by simply typing into the Josh.ai Natural Language Scene Editor:

With the Fiji platform, clients can dictate scenes that run on schedules, include delays, deep-link specific audio and video content, and contextually adjust or trigger systems depending on the time, weather, user location, state of devices, and sensor data. All of this customization is done using natural language text instead of complex programming, a first in the industry.

Clients operating with Fiji can rest assured that everyone in their home has an appropriate level of control. For custom integrators, as support-level users and homeowners with head-of-household privileges, each party has the power to enable permissions in two ways – provide additional users access based on their role as a resident or guest, as well as limit voice control capabilities depending on what device is being spoken to in each room. For example, the Josh Micro assigned to a child’s room can be limited so that a command of, “Ok Josh, turn off the lights everywhere” is contained to their area as opposed to activating every light in the home.

Building upon Josh.ai’s distributed AV architecture, Fiji introduces IR control for cable boxes. Any cable provider’s channels can now be mapped and called as part of a natural speech command or incorporated into a scene. For example, a client can walk into their den and say, “Ok Josh, watch ESPN,” which will power the TV on and deep-link to that channel despite the cable provider not being directly integrated with Josh.ai. A client can then use the video remote UI within the Josh.ai app to surf channels, play and pause content, and more all through IR.

Adding to its robust ecosystem of integrated devices, Josh.ai is proud to unveil its first iteration of door station support with both 2N and DoorBird partnerships. Josh.ai app users will be able to view video feeds from their door stations, have remote access to relay buttons that control locks or nearby lights, and receive push notifications when activity or a doorbell push is detected.

Control4 native music has been one of the most commonly requested integrations from mutual  Josh.ai and Control4 dealers. Josh.ai is excited to roll out Pandora support, enabling natural voice commands to group and route music to all accessible audio zones. The compatibility includes manual control through the Josh.ai app, which will offer users the ability to manually queue up music content and group audio zones. Josh.ai has its sights set on adding more music services through Control4 in the coming months as well.

Lutron occupancy sensors, coming later this year, will provide another element to the functionality of Fiji’s Natural Language Scene Editor. When motion is detected by a sensor, it can trigger powerful automations when combined with conditionals. For example, a “Midnight Snack” scene can be created to illuminate a path to the kitchen for a client and automatically turn off their lights when they return to bed:

In addition to its Natural Language Scene Editor tool as part of Fiji OS, Josh.ai is rolling out the ability to create scenes even more simply using voice. For example, a user can create a “Good Morning” scene that will also be accessible in the Josh.ai app by giving the command:

“Ok Josh, when I say good morning, set the lights to 50 percent on the first floor and listen to Andrea Bocelli in the Kitchen”

The Wake Beep feature presents a new and flexible option to instill users with more confidence when interacting with their Josh Micros. For situations where a client may not be able to see a Josh Micro’s LED confirmation due to its location in a room, or if they are not concerned about looking at Josh Micro to ensure it is hearing them, the audible Wake Beep tone provides another form of verification that Josh.ai is actively listening. The Wake Beep can be enabled on some Josh Micros while disabled on others in a deployment, providing an additional amount of customization with every Josh.ai system.

Location awareness is an important aspect of contextual voice control. Josh.ai’s new Automatic Zoning feature will enable clients to speak more naturally in some of the most commonly used areas in their home. In many Josh projects, there are zones that are made up of a collection of rooms. For example, a master suite may include a bedroom, his and hers bathrooms, and multiple closets. Josh.ai will now automatically recognize that there is a “Master Zone” in the home so that when a client is giving a command in the master bedroom like, “Ok Josh, turn off the bathroom lights,” it will know to adjust the lights in the master bathroom. The alternative to date has been requiring the client to specify “master bathroom” in their command.

Although a subtle difference, it will make giving voice commands within a Zone much more natural. To start, Zones are created when a Josh Micro resides in a room that starts with, “Master,” “Guest,” or any noun containing an “‘s” – like “Alex’s” or “Tim’s.”

In addition to pushing Sirius XM support later this year, Josh.ai is adding more functionality to its current music offerings.

Sonos users with Apple Music now have additional access to Apple radio stations through voice commands and the Josh.ai app. Although Josh.ai already supports Sonos Favorites when they are incorporated into scenes, it is adding the ability for natural voice command access as well. Users with curated playlists will be able to easily make requests like, “Ok Josh, listen to Alex’s party playlist in the kitchen, dining, and living room.”

For Heos clients, Josh.ai has added iHeartRadio support for voice commands and manual content search through the Josh.ai app.

For Android users, Josh.ai is excited to announce that its app is going through the final stages of development and will be releasing later this year. Stay tuned for an update from the company in the coming weeks for more information.

Josh.ai Keynote – Save the Date

For five years, Josh.ai has been reimagining what is possible in the home. In lieu of a physical CEDIA Expo this year, Josh.ai will be hosting their first-ever keynote on November 10.