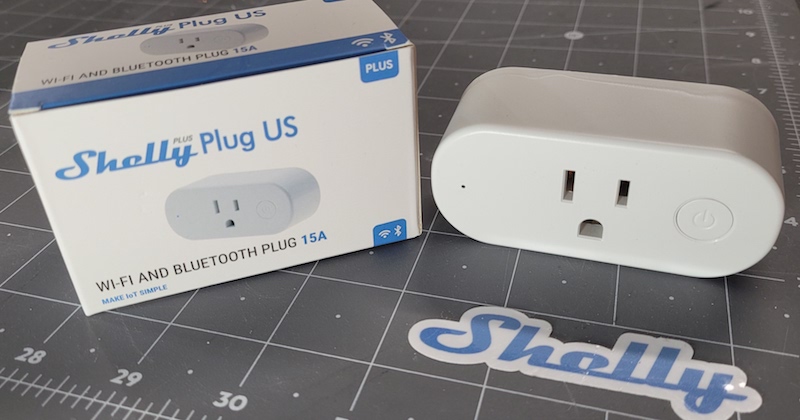 Background on the Shelly Line

Shelly manufactures a wide range of IoT devices that solve a wealth of problems in a smart home. They offer a variety of:

Shelly smart home products are manufactured by Allterco Robotics, one of seven companies that make up the holding company Allterco whose headquarters is in Sofia, Bulgaria. Allterco has 20 years experience in mobile value-added products and services. The company has expanded beyond the telecommunications industry and is now focusing on the development and distribution of IoT products and solutions.

Last year, Shelly built upon their existing product line with the introduction of new Plus and Pro lines of products. Joining Shelly’s Plus line is the updated Shelly Plug US.

Here’s What the Shelly Plug US is Designed to Do

There are more smart plugs available than can be counted. Shelly, however, has worked hard to differentiate their new plug from the crowd.

Among its features, the Shelly Plug US includes power monitoring. You can obtain the power used by the appliance plugged into the Shelly Plug US through either the Shelly App on your smart phone or through the Shelly API when integrating the device into a smart home ecosystem. You can also set a power limit and the plug will automatically turn of the device when this limit is exceeded. For example, if a plug was used on a cooktop in an RV, you could use the power limit to make sure someone doesn’t turn up the cooktop too high, which would overtax the power generation capabilities of the RV.

The Shelly Plug US, which operates through either Wi-Fi or Bluetooth, also supports built-in, custom schedules to turn the Shelly Plug US on/off at predetermined times including sunrise and sunset.

For added safety the Shelly Plug US includes a temperature sensor. In case an unsafe temperature is detected, or there is a rapid rise in temperature detected, the device will turn off the connected appliance and send a notification. The Shelly Plug US also include overpower and over voltage protections. If the device senses an over-power, or over-voltage condition, then the connected appliance will again be turned off and a notification sent.

Additionally, the Shelly Plug US includes built-in timers to optionally turn the connected appliance off after it has been on for a specific time period or turn it on after it has been off for a specific time period. For example, you can plug an iron into a Shelly Plug US and never have to worry about whether you remembered to turn the iron off after using it.

For convenience, a physical pushbutton that turns the connected appliance on/off is included on the front of the Shelly Plug US, as well. There is also a built-in LED that provides the user with the plug’s on/off status.

The ETL (Electrical Testing Laboratories) Certified Shelly Plug US includes the ability to create custom features and functionality through mjS scripting. Multiple scripts can be executed together with dependences on input/output status, sensor data, or WLAN requests.

Hands on with the Shelly Plug US

The Shelly Plug US is very easy to use. Installation of the device is done using the Shelly app on your iOS or Android smart phone. You connect with the device over a Bluetooth connection or using the built-in web server over Wi-Fi as the Shelly Plug US will broadcast an SSID and act as an AP (access point) when first powered. Then simply provide it with the SSID and password for your home’s Wi-Fi network along with a name, where in your home the device will be located, and your choice of an icon that will be used to show the device within the Shelly app.

Once connected to your network, you can use the Shelly app to configure all the device’s settings and features that are described above. In addition, like all Shelly devices, the Shelly Smart Plug US has an internal web server. Going to the device’s IP address in a browser provides you with an alternate way of controlling the device as well as configuring all of its settings and features.

My only complaint is that the REST API doesn’t provide a way for the Shelly Plug US to report the power being used by a connected appliance without the smart home processor/hub polling for that information. I have suggested to Shelly that they update their API to support the ability for the Shelly Plug to report power without polling. Hopefully they will add this capability in the near future.