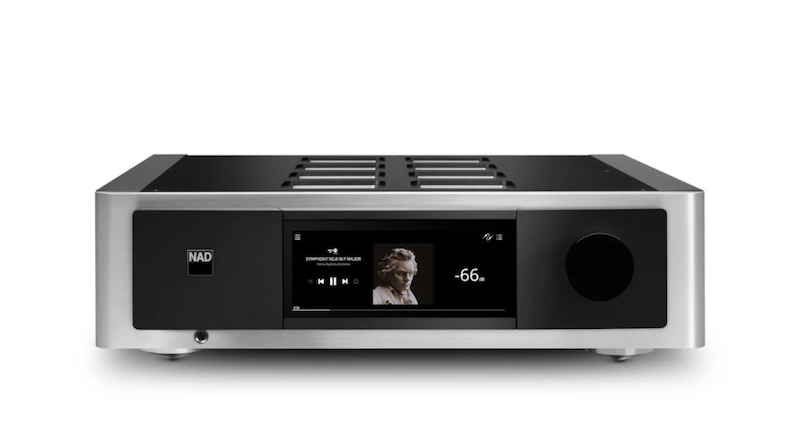 I’ve been an NAD fanboy since they launched their M10 streamer back in 2019. Needless to say, when I heard about the launch of its big brother, the M33 BluOS Streaming DAC amplifier, a few months ago I couldn’t wait to get my mitts on one. The M33 sports double the power of the M10 at a whopping 200 watts. Would it prove twice as nice? I couldn’t wait to find out.

The M33 BluOS Streaming DAC Amplifier retails for $4,999 and it comes boxed in a high end looking cardboard box, lovingly encased in a dark drawstring-cinched cloth bag. There are two accessory boxes as well, one containing a remote control Jony Ive would be proud of, quick start guide, magnetic feet while the other is stocked with power adapters and the Dirac Live calibration microphone.

After pulling the M33 from its velvety cocoon, I followed along in the quick start guide and found the physical connections super easy. One of my big pet peeves, binding posts, have been made easy to use thanks to NAD’s combination of fat posts and chunky knobs. I wish these had been around when I was doing installation work full time! 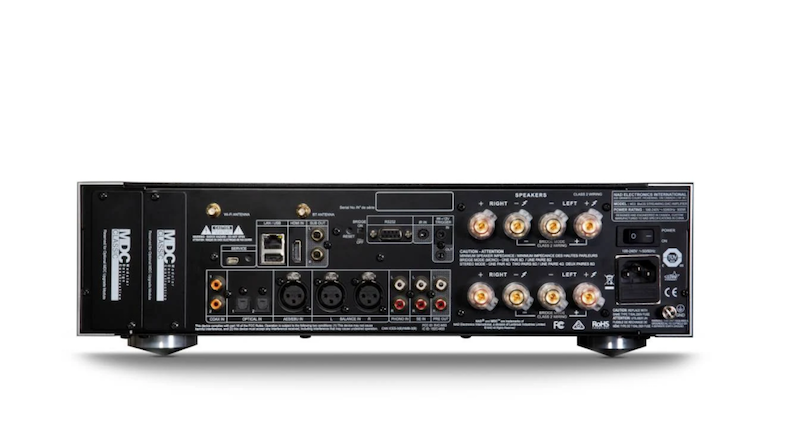 I connected two speakers, a subwoofer, and a Sonos Port into the back of the M33 in less than five minutes. I clicked on the power switch in the back and tapped the on/off icon on the top and heard a satisfying “click” as the M33 came to life.

The boot up time was superfast and I had the front facing touchscreen ready to use within 30 seconds. This is a marked improvement over the M10 and hopefully this same speed will carry forward into the upcoming M10 version 2 due out later this year.

Once I’d powered up the M33, I followed the on-screen prompts asking me to finish the setup inside the BluOS app. I pulled out my iPhone which easily discovered the M33 and set it up as an available AirPlay speaker. This process keeps getting cleaner and cleaner with each passing year, and it’s nice to see some elegance creeping into an often-annoying workflow.

I returned back to the BluOS app and followed along as the wizard wrapped things up. Total time spent: 10 minutes. Not bad!

I happened to know the M33 had Dirac Live calibration capabilities onboard (the BluOS app doesn’t do a very good job of seamlessly guiding the user through this part) and only knew to download the separate Dirac Live app because of my previous experience with the M10. I further intuited how to connect the Dirac Live microphone to the back of the M33 by way of its mono mini plug into a USB dongle.

Once again, I followed along through the Dirac wizard and placed its microphone around the listening area while it took nine separate measurements. That took a little time and patience, but I hoped the juice would be worth the squeeze. I’m a sucker for calibration wizards where you feel like the component is customizing itself for your room, for you.

I watched, listened and dutifully moved the microphone for the next 20 minutes and finally was shown a graph plotting the performance curve of the room where Dirac Live asked me to make any changes I’d like. I’m not sure who the core user of Dirac Live is, but me monkeying around with its fancy AI-created curve didn’t strike me as the best idea. I saved the Dirac Live performance data to the M33 and started looking for some music to demo.

I logged into my TIDAL account on the BluOS app and began playing Absolute Masterworks Baroque in Master Quality Authenticated (MQA) format. My jaw dropped. The sound was beautiful and clear with an incredibly realistic feel. Even at low volumes I could feel the power of the M33 doing heavy lifting.

I pressed on, playing the Cure’s “Fascination Street” and Elbow’s “K2,” both in MQA, and realized I was hearing the sound equivalent of well-aged bourbon. There are some things you can’t rush or fake. Two hundred watts, as it turns out, is better than 100 watts. “These go to eleven.” If 200 watts isn’t good enough, the M33 can be bridged in mono mode for a max power output of 700 watts. I was scared to turn the volume up much past -30 db, so there’s a lot of head room left in the M33 in case you’d like to, you know, start up a Manhattan night club in your living room.

If you’ve got the budget, do yourself a favor and walk down to the ATM, grab $5k real quick and head over to your nearest NAD dealer. Tell ’em Clifford sent you. You’ll thank me. The NAD M33 is a treat to listen to and well worth the hefty price tag. I didn’t think they could do much to improve on the M10, and that’s something I’m glad I was wrong about.