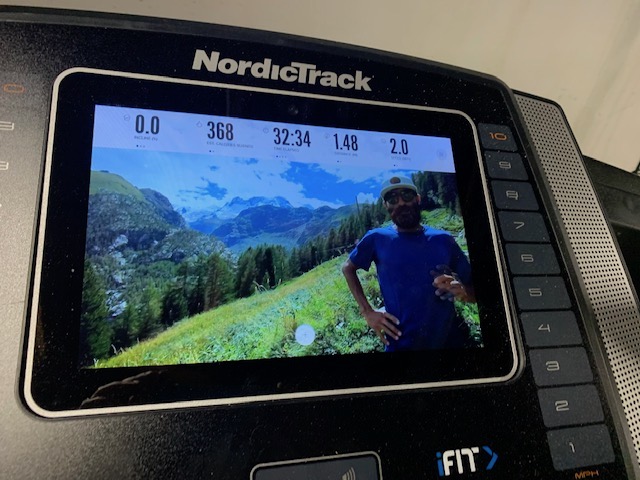 Note: This is not a paid advertisement. No discounts were given for this article. This piece of gear was purchased by us and there are no kickbacks. Just a girl playing with fun new technology for your enjoyment.

We purchased our Nordictrack on Black Friday 2020. Not because there was a great deal, but we were home and could finally make the leap. Five weeks later, it was delivered to our garage, and we lugged it down to our basement. As the Buffalo, NY, snow began to fly and the steely grey days set it, I decided to trick my brain by only training in beautiful places.

You see, Nordictrack comes with a one-year subscription to iFit, an interactive app that takes you around the globe. Here I thought I never wanted a “TV” on my treadmill, but this is no ordinary TV. This monitor connects to the app on your phone, where you can choose to complete a series or search by duration, trainer, environment, workout type, and more. 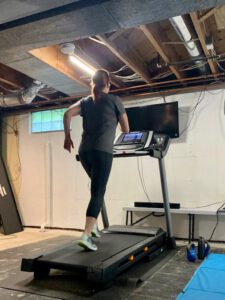 Select it as a favorite on the app, and it appears on your treadmill the next time you climb on. If you’re working on a series, the next workout in the series shows on the home screen.

I went for a hike in Hawaii and a run at Inspiration Point in Bryce Canon during the first week. A few weeks later, I climbed the Matterhorn in Switzerland, and it was incredible. It was certainly more fun than one would expect to have on a piece of exercise equipment. I have learned the proper way to breathe, discovered my target heart rate, and found how my foot should hit the ground. My experience has been more personalized than it ever was at the gym or on the pavement.

Here is the craziest part, I find myself looking forward to these NordicTrack runs.

This truth was a moment for me. You see, I was not a runner. As a matter of fact, I had never considered myself to be athletic. I never played an organized sport in high school. In my 30s, after I brought two kids into this world within 17 months, I did start a yoga practice (because my husband said I was often cranky). Then about two years ago, on a dare, I went to an Orange Theory class and continued there for about a year.

If you’ve never heard of Orange Theory, it is an hour-long class divided between weights, treadmills, and rowers. You wear a heart rate monitor, intending to keep your heart rate up and score points. The “theory” is that if you get enough of these points, your body continues to burn calories for the next day or so. OT was the first time I had run on a treadmill.

Then the pandemic started. And the world shut down.

As my concern for my company grew, and we were forced to pause our business (we are in New York State, and our rules have been strict), and I was working from home, I needed a release. One chilly morning in March, I strapped on my sneakers and ran (and walked) down the street. I kept this up about once a week through the spring, summer, and fall, but as the weather began to change and I knew winter was coming, I considered the purchase of a treadmill for the first time in my life.

A few months into our treadmill experience, NordicTrack released their own heart rate monitor and an update to the machine called Active Plus. The $99 added device connects via Bluetooth to truly give you a personalized workout. If your coach does not want your heart rate over 77 percent during your recovery run, a pop-up on the screen will say, “Your heart rate is a little high, so I’m going to slow you down,” and it will. It will also adjust your incline as needed. It is game-changing.

IFit also has live classes streaming from their headquarters in Logan, UT. They’ve recently taken to presenting some of the adventures live. I did a hike on Everest, where the coach took live questions from across the globe.

The recorded workouts include walking tours, hiking, running, and even mindfulness, removing any barrier to enter into the world of fitness. Your device changes incline with the terrain, and the speed changes with the trainer, giving you an impressively immersive experience with the small screen that is part of our system. In all honesty, had I understood how much I would enjoy “traveling” while working out, I would have purchased a higher end model.

While “how” the videos are created remains a secret, I did learn that each shoot has an entire production crew of 12-15 people, and each production book is between 75-100 pages long! Each video shoot utilizes terrain, topography, and even education components from geography to anatomy and beyond.

Anyone can subscribe to iFit for $15 a person or $39 for a family of up to five, but you’ll have to push your own buttons on your machine. The treadmill itself comes with a 10-year warranty.

Six months later, I’m working out more than ever before and oddly enjoying it. Without the interactive component, I would have been bored long ago. This tech gets two thumbs up, well played NordicTrack and iFit. Well played.

More from Heather: What a Professional Technologist Installs in Her Own Home

Samsung Terrace Helps Me Bring Indoor Entertainment to the Outdoors