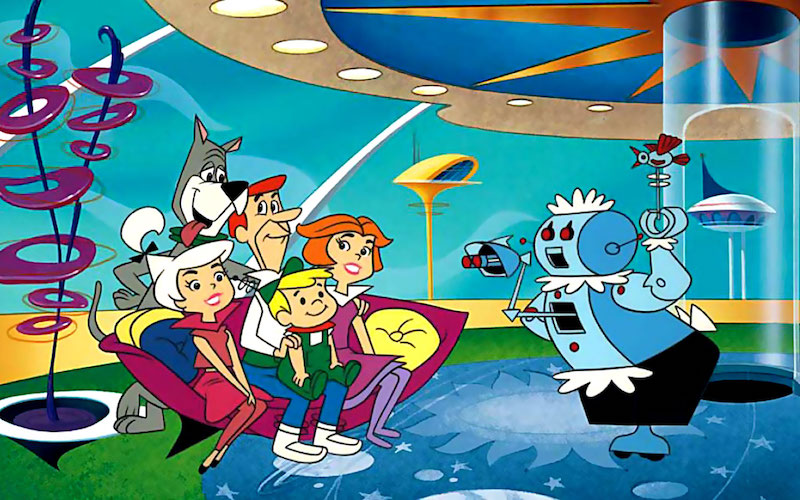 Popular culture influences us in a number of ways, from what we wear to how we act to even the various catchphrases we use every day. Which I personally find shagadelic, baby. But, with all of its influence, can popular culture predict the future?

Many people are aware of these pop culture “predictions” – Back to the Future 2 had a functioning hoverboard, 30 Rock featured a sandwich eerily similar to the KFC Double Down years before it was released, and The Simpsons predicted the election of that one guy that I don’t want to write about and you don’t want to read about.

But has popular culture also given us a crystal ball into the realm of connected technology? Let’s see if fiction can, in fact, predict our connected future.

For decades, humans have dreamed of creating sentient beings of high intelligence and masterful engineering – so that we can force them to do meaningless tasks around the home. Possibly the most iconic example of this is Rosie the Robot from The Jetsons, whom the family seemed to have in a constant state of vacuuming.

Well, it looks like The Jetsons were ahead of the curve, as Amazon is supposedly working on their very own Rosie-like robot project by the name of Vesta. However, Vesta might have gotten a better deal, as unlike the Jetsons, Amazon isn’t known for exploiting their employees.

Back in the simple time of 1999, a young, plucky company by the name of Disney released the Disney Channel original movie Smart House. The film, which starred Katey Sagal and nobody else with a noteworthy IMDb page, featured a single parent (in Disney, no way!) raising a family that wins a contest to live in a smart tech-enhanced home.

Some wacky shenanigans ensue, including a radical 90s party, a strict hologram housewife, and eventually the smart house locking down and holding the family prisoner. Ahh, the magic of Disney.

In 2010, Apple introduced the iPad, effectively reigning in the era of tablets. For the uninitiated, tablets are basically laptop computers, but without the false idea that you might get any work done. But while they are quite commonplace today, did you know that we got an initial glimpse over forty years before the iPad released?

Yes, Stanley Kubrick, the director of such lighthearted romps as The Shining and A Clockwork Orange, featured tablets in his 1968 film 2001: A Space Odyssey. This isn’t even Kubrick’s first major prediction, as The Shining predicted my last stay at the Holiday Inn.

While they still seem decades away, self-driving cars are here and they’re likely only going to grow with time. But while these vehicles are now a reality, you may have already seen them nearly thirty years ago in a goofy Arnold Schwarzenegger movie that’s an absolute product of its time. No, not Batman and Robin. Or Jingle All the Way. Or Junior.

In Total Recall, citizens are driven around in Johnny Cabs, automated vehicles that take citizens to their destinations. The only drawback? The cabs are inhabited by creepily uncanny robotic drivers whose mouths and eyes don’t match what they’re saying. I’ll stick to my judgmental Uber driver, thank you very much.