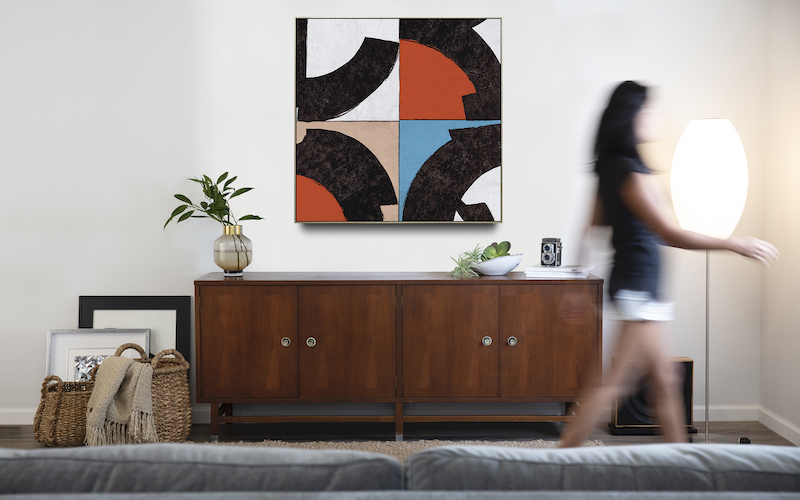 Technology with an Eye for Design

It’s easy to get wrapped up in the technology behind smart products for the home. After all, it’s the level of engineering and customization of the hardware and software that determines how well TVs, music systems, architectural lighting, home control systems, and other devices perform. But technology should look good, too. It should blend with the home environment, complement the surrounding cosmetics, and maybe even stand out as a conversation piece.

Home systems manufacturers are embracing this notion, as products from all sectors of the residential tech industry have incorporated a distinct design slant. Home systems integrators are on board, too, recognizing the value that designers bring to the overall home systems project.

“In our business, interior design has always had an influence on home technology solutions we pose to clients,” said Jamie Briesemeister, CEO/sales marketing director of Integration Controls, St. Louis, MO. “With products that are geared at providing the best of both worlds, it makes it easier to include form and function without compromise.” Many fashion-forward, high-performance, no compromise home systems solutions were showcased at the CEDIA Expo, held earlier this year, in Denver. Here are some of our favorite looks from the show floor.

Speakers are going through a major cosmetic makeover. Models that can be recessed into the wall and ceiling are being joined by speakers that double as pieces of artwork. Leading this design trend is Leon Speakers, which showcased a remarkable assortment of eye-catching loudspeakers intended to be admired just as much for their visual appeal as their audio performance. Grabbing attention at the booth were wall-mounted speakers covered with grilles customized with images from celebrity photographer Roberto Rabanne and custom metal artwork from Gabriel Urist. The Ente SoundTiles represent a completely new way of looking at loudspeakers – as an art form, not only a piece of technology.

When speakers weren’t masquerading as fine art at the CEDIA Expo, some were functioning as useful pieces of furniture. Leon’s Horizon Denza Modular Credenza, for example, performs as a soundbar but looks like a shelf on which to display framed photos, vases of flowers, and other decorative items.

Other companies like Sonance and James Loudspeaker demonstrated how to minimize the visual presence of loudspeakers in a home’s interior or landscape through an application called hydro dipping. During the hydro dipping process, a piece of film dissolves into a layer of paint that floats on the surface of water. When the speaker enclosure is dipped into the water, the paint conforms and sticks to its surface. The result is a speaker finished to look like wooden boards, granite, or even shrubbery – a perfect blend for outdoor environments.

Just when you thought the wooden TV cabinet of the 50s and 60s was long dead, it’s back… but with a modern twist. Manufacturers including Salamander Designs and Bang and Olufsen have given the antiquated TV cabinet a fresh, contemporary look, offering an alternative to the uber-popular, yet often cosmetically disruptive, method of mounting a display to the wall. Salamander’s “Wall” unit, which originated in commercial settings, incorporates a cabinet with a panel onto which a display can be mounted. The unit is modular, which means the finish of the cabinet door and panel can be updated, and a new TV mounted, at any time. Plus, the entire unit is freestanding, so it can be repositioned, moved to a different room, or relocated should you move into a new house – try doing that with a wall-mounted display.

Another freestanding solution, the Beovison Harmony from Bang and Olufsen, incorporates motorization and a clever design to transform itself from a stylish piece of furniture while not in use into a high-end entertainment center. On command from a handheld remote, an oak and aluminum cabinet – which conceals six speakers – opens like the wings of a butterfly, and ultimately rests beneath the TV. At the same time, a 77-inch LG OLED TV lifts several inches to a more comfortable viewing position.

“The Beovision is the answer to the age-old problem of what to do with the TV when it’s not in use,” said B&O Public Relations Manager Christopher Devine. “Rather than staring at a piece of technology on the wall, users can admire an interesting piece of furniture.”

Draperies are the epitome of form and function. They serve as a decorative element of the home space while providing a layer of privacy, insulation, and lighting control. It’s a shame their headrails are usually so unflattering. “My pet peeve has always been the cosmetics of drapery fascia,” said Tom Cooley of Screen Innovations. Seemingly stuck in a time warp, fascia were long due for facelift. So, Cooley connected with an ASID designer to select 12 different fashion-forward colors and low sheen finishes for Screen Innovations’ Nano portfolio of products. In addition to being available in a wide variety of trendy color choices, as well as custom colors, the Nano shading casings are the smallest in the industry, starting at 2.25 inches, and are completely finished on the ends – something that’s missing on many other fascia, according to Cooley.

In the past when people thought about home theaters, a dark, secluded “man cave” came to mind. While this style still resonates with some people, home cinemas are “seeing the light” by incorporating accouterment that make the space just as eye-catching when the movie is off as when it’s on. Outfitted with color-changing LED lighting, decorative acoustical treatments, and custom finishes, the home cinema has evolved into an area that can function as meditation room, yoga studio, gaming room, sports bar… really, just about anything. Integrating all of these elements into several different packages is Rayva. Its prefabricated, personalized entertainment environments streamline the design process, as everything is included in the package: lights, seating, carpeting, and more. And as demonstrated at CEDIA, a shift in colored lighting, video, and audio can transport viewers to a forest, beach, or yoga studio. “Wellscapes” are a huge initiative of Rayva’s, offering home systems integrators another avenue of differentiation and end users an exciting new way to utilize technology.

Keypads that consolidate multiple controls under one wall-mounted faceplate have single-handedly cleared up the “wall acne” that can plague homes. Instead of relying on several individual switches to operate lights, ceiling fans, and other devices, buttons on one keypad can do the job. Taking this concept a step further is Basalte. Its sleek Euro-style keypad doesn’t look like a keypad at all. Void of traditional buttons and labels, it adds a stunning, decorative touch to a wall, and can be integrated with leading home control systems to operate a wide variety of devices. To offer a complete “wall control” solution, Basalte also offers a matching thermostat and electrical outlet – all of which can be finished in stainless steel, leather, brass, or whatever material complements the décor.

“We’ve always had an interest in design, as is apparent with our line of products,” said Basalte’s Tom Lambrecht. “But now it’s become a real topic of discussion in the home electronics community.”

Home technology continues its march forward in its evolutionary journey. Systems continue to become smarter, more robust, and increasingly reliable. This has always been the objective. More recently, however, design has become an equally important element of the home systems equation. There’s no place that proves this point better than CEDIA Expo. From speakers and displays to keypads and motorized draperies, attention to design was apparent across the show floor, and a huge area of focus for home systems integrators.

“Blending the world of interior design and home technology will not be a trend that will pass,” Briesemeister said. “It will be how homes are designed and built now and in the future.”